The Twitterverse went crazy in Who Dat Nation yesterday when it was announced the veteran free agent had been signed. What is all the fuss about and who is Stevie Breaston?

Steve Breaston, a veteran of the Kansas City Chiefs and Arizona Cardinals signed a one-year, veteran minimum salary with the New Orleans Saints yesterday in a move more than likely only two people saw coming. On a day when everyone's heads were turned in the direction of a head-scratching workout with former Dallas and Jacksonville wideout Laurent Robinson, the deal with Breaston got done and done quickly.

The best news, and there is some here, is that Laurent Robinson won't be signed. That is, unless the Ninja Sean Payton (as he was referred to on Twitter yesterday) could do it at anytime and the head scratching would continue. More than likely, it won't happen. 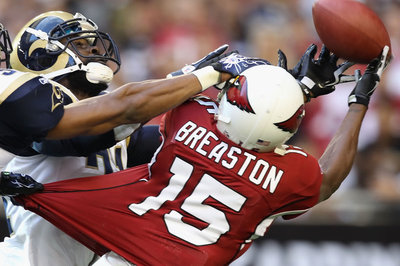 Apparently the Saints felt they needed more depth at the receiver position.

Steve Breaston has now entered his 7th year in the league. He was drafted out of Michigan in the first round by the Cardinals. He previously played with the Kansas City Chiefs as well. He has nine touchdowns on 255 receptions and 3,387 yards. His best season was 2008 with the Cardinals where he finished with 1,006 yards and 3 touchdowns on 77 receptions. He has averaged double digit receiving yards in all six seasons. One tweeter today commented he would be a great deep threat receiver for Drew Brees if Joe Morgan were to be hurt for an extended period of time. I'm not sure I would go that far, but he is a capable receiver.

Steve Breaston might not enjoy yardage, touchdowns, and receptions on the levels of Wes Welker or others now in the league, but he is a dependable threat at the other end of the pigskin from Drew Brees who, as I have stated before, can make any receiver look better. He brings veteran talent and leadership to a team that has a great deal of young receiver talent already. Whatever the injury situation, the Saints are, on paper, looking a bit chaotic at the wide receiver position this week. Brent Leonard was waived and re-signed both in the same week, for instance.

While the signing of Breaston is big news, he is hardly a lock for a roster spot. The Saints have nearly 93 players on the roster that has to be cut to 53 before the regular season deadline. The wideout competition has appeared intense thus far in camp with Andy Tanner, Nick Toon, and others making a case for the magic 53.

The young guns have made a terrific case to this point, but I still think Breaston makes the final roster barring an injury or set back to a previous knee injury he dealt with last year. Steve Breaston makes sense and he has a great deal to add to this team. He isn't the troublesome type we have seen in other players in the NFL. If he adds any intrigue to our Saints' WR corps, I like the problem this causes. He is likely going to love catching from Drew Brees.