The season-ending injury bug has been stinging teams all across the league. Looks like it came back to sting more Saints players.

Share All sharing options for: Saints Lose Joe Morgan and Kenyon Coleman for the 2013 NFL Season

As we approach the pre-season opener on Friday night against the Kansas City Chiefs, two position battles just became a bit more interesting. Too bad it will be for a negative reason.

Katherine Terrell of NOLA.com reports that Joe Morgan and Kenyon Coleman are both out for the season. Morgan received a second opinion on his knee, which was injured during Saturday's scrimmage. The Saints' deep threat has a torn ACL and will have season-ending surgery. Coleman was seen leaving practice slamming his helmet in frustration. It turns out his frustration was due to a season-ending pectoral tear. 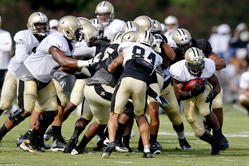 At this point, I think all Saints practices need to be cancelled.

Well this definitely explains the signing of Steve Breaston and the reported visit of veteran wide receiver Laurent Robinson. Suddenly, Saints fans may no longer be looking at Breaston as a camp body, but possibly as a contender for the 3rd or 4th wide receiver spot on the depth chart. The 7th year veteran out of Michigan disappeared in Kansas City's offense in 2012, but had at least 45+ catches and 700+ yards every season from 2008-2011. At 30 years old, Breaston could have another productive season in him, especially being part of this Drew Brees led offense.

The loss of Kenyon Coleman may actually turn out to be the bigger loss of the two. The depth along the defensive line is not close to the depth at wide receiver. Prior to his season ending injury, Coleman was projected to be the starter at defensive end. Rob Ryan has always had high praise for Coleman, especially for his ability to stop the run in his 3-4 defense. While Akiem Hicks or Tom Johnson could fill in admirably, the depth of an already thin defensive line takes a big hit without Coleman. I would expect for the Saints to have their eyes wide open for any defensive linemen that could possibly compete for a spot on this depth chart.

Joe Morgan and Kenyon Coleman may join Victor Butler on the IR, making three players who were depended upon to be key contributors in 2013 done before the Saints even take a snap in a preseason game. While losing the deep threat and potential of Morgan in the offense is huge, I think that losing Butler and Coleman really has the Saints taking a step backward defensively. Both Butler and Coleman played under Rob Ryan in Dallas last season and offered an immediate familiarity with the system. In both cases, the fill in will most likely be another player having to learn and adjust to the new 3-4 scheme. So much for adding new bodies to a defense that MUST improve in 2013.

How will these injuries impact the Saints moving forward? Who has the best chance to be the next man up for two players who were to have key roles on this Saints roster this season? Are you panicking yet?