There is plenty of blame to go around for Saints running back Mark Ingram's poor performance against the Atlanta Falcons on Sunday.

Share All sharing options for: Saints Running Back Mark Ingram Remains an Enigma

Mark Ingram had nine carries for just 11 yards in the Saints' 23-17 win over the Atlanta Falcons on Sunday. Not the showing anyone hoped to see from the running back. Naturally his performance has sparked a fierce debate among Saints fans trying to determine who or what is more to blame for Ingram's woes: the running back himself or the offensive line?

I figured what better way to get to the bottom of this great argument than to look closer at all nine of Ingram's runs Sunday. So I did just that, and the results are below. Larry Holder did his own film study, and he seems to insinuate that the offensive line was, in fact, more to blame for Ingram's rushing woes.

The answer, honestly, is a little bit of both I think. For the most part, I agree with Larry, the offensive line wasn't giving Ingram any help Sunday. But Ingram failed to capitalize on the few opportunities he did get. So it's difficult to place the blame squarely on one side or the other.

Of Ingram's nine carries, there were five which I thought were unsuccessful because of poor blocking. Let's take a look at them. 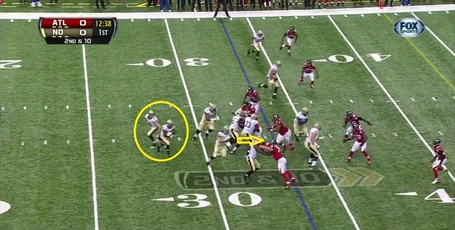 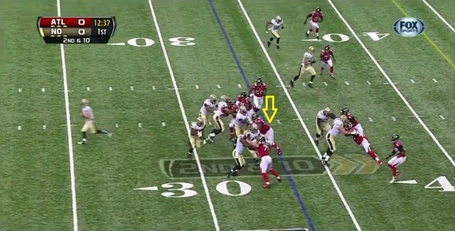 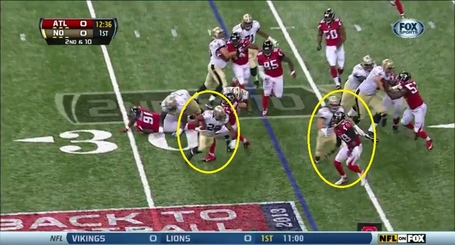 Here is the 4th down play. You can see the entire Falcons defensive line is two yards into the backfield by the time Ingram even touches the ball. He's got no chance. 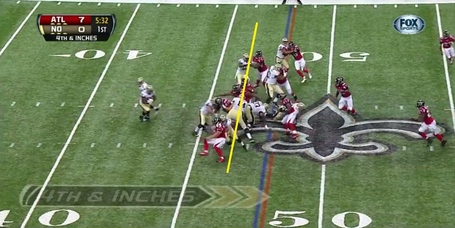 On this play, Ben Grubbs gets destroyed, allowing the Falcons defender quickly past him. The play is an immediate bust; Ingram has nowhere to go but tries to make the best of a bad situation. Ingram actually breaks two tackles before the play ends in a loss of 3 yards. 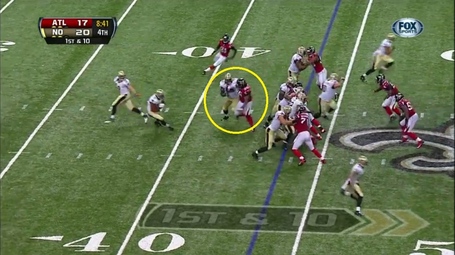 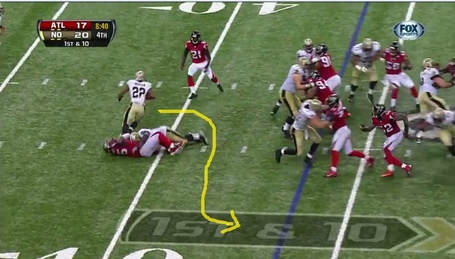 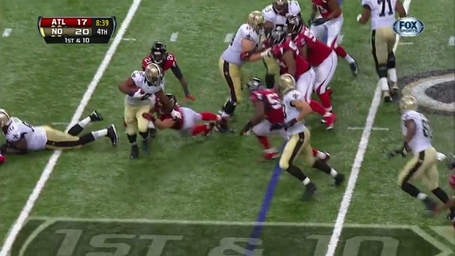 The entire middle of the field is a traffic jam as Ingram takes it to the outside. Jimmy Graham gets forced into the backfield and Ben Watson can't contain his man and seal the edge, forcing Ingram out of bounds for a short gain. 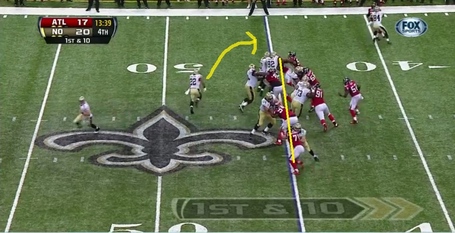 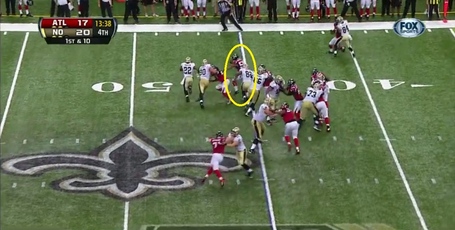 Ingram takes the handoff and immediately must bounce to the outside because Grubbs is pushed info the backfield (yellow circle, first frame). Meanwhile, Charles Brown gets beat on the left side (yellow circle, second frame), forcing Ingram even further to the outside, where more Falcons are waiting to make the tackle. 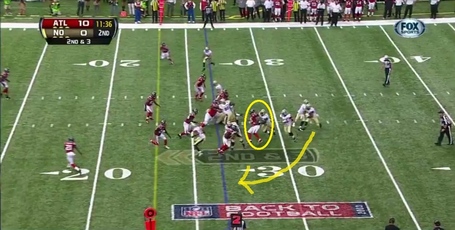 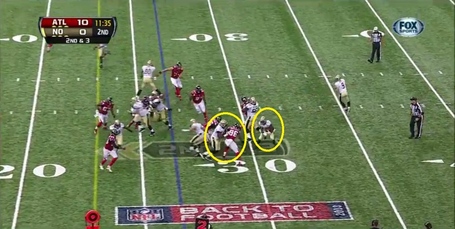 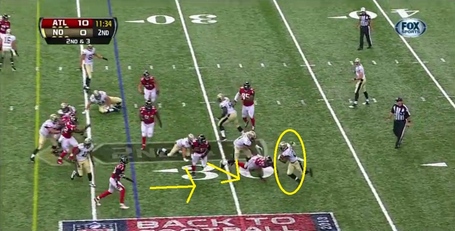 Obviously there are times when everything goes right, as was the case with Ingram's 7-yard gain in the second quarter. We don't need to further examine that one. But there are also times when the defense just makes one hell of an athletic play. Examples of that were also on display Sunday against the Falcons.

Ingram's got a gap between Jahri Evans and Zach Strief and hits it. But DT Corey Peters sheds his block and grabs Ingram by the legs and takes him down as he passes through the hole. 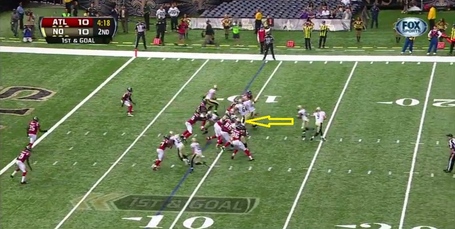 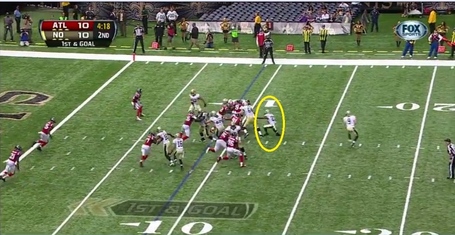 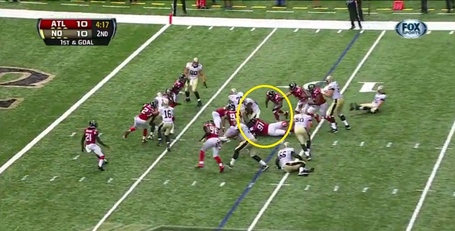 The blocking is perfect on this run to the left side, and Ingram hits the hole. But William Moore comes flying in untouched from deep safety and nails Ingram (yellow circle, third frame). 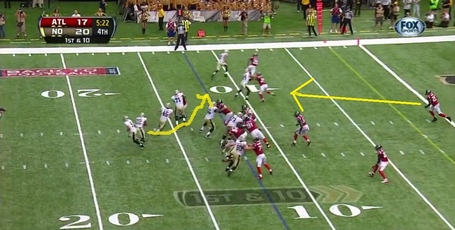 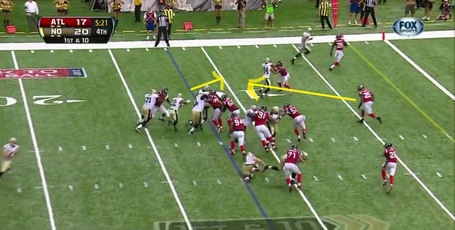 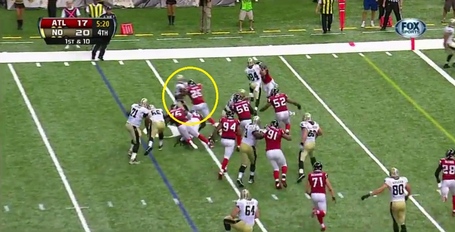 And, of course, there are times when the offensive line does their job but Ingram is his own worst enemy. Like that one time...

Ingram takes the handoff, every blocker is paired up, and there's room to run. Things look good on this play. Then Ingram trips over his own two feet. 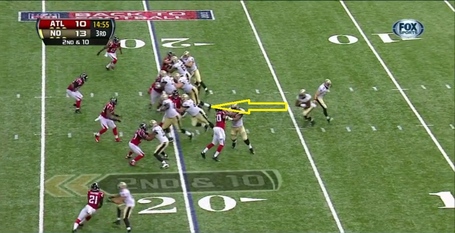 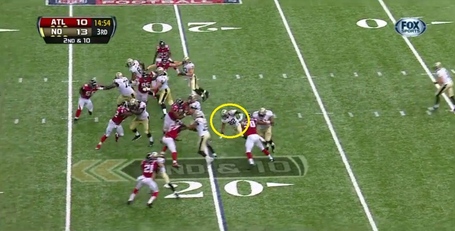 So there you go, plenty of blame to go around. Ingram's day was certainly made more difficult by a few breakdowns in the run blocking department. But when he had his chances, he wasn't able to exploit them. I'm going to wait a little longer before giving up on Mark Ingram.