Trailing by six points with less than a minute to go and a fourth down and goal at the New Orleans Saints' 3-yard line, the Atlanta Falcons were unable to reach the end zone and defeat their bitter NFC South rivals. After giving up 77 yards rather easily, the Saints defense showed up when it mattered most. Here's a film study of the key plays that enabled New Orleans to come out on top in the final drive of the game.

The season opener between the New Orleans Saints and the Atlanta Falcons this past Sunday left fans of both teams with an eerie sense of déjà vu. Just like last year, while trailing by single digit, the Falcons fell to the Saints, failing to convert on four attempts inside New Orleans' 10-yard line.

The importance of the win cannot be understated for the New Orleans Saints. Not with the game marking the official return of head coach Sean Payton from suspension. Not with the Saints having the worst defense in the history of the world last year and yet holding the powerful Falcons offense to a mere 17 points. Perhaps most significantly, the Saints are now 1-0 to start the season, with a win against their primary division rival.

Let's breakdown the crucial plays of the final drive, in which Atlanta moved quickly from their own 20-yard line to the New Orleans' 7-yard line, only to be kept out of the end zone by a resilient Saints defense.

The Falcons start the drive with a "Trips Right" formation and a single receiver to the left. New Orleans counters with four down linemen and a "Cover 2 Man" concept. The main protagonists in this play are wide receiver Julio Jones (#11, pink arrow) who runs a seam route towards the middle of the field while being guarded by Saints cornerback Jabari Greer (#33, dark blue arrow). 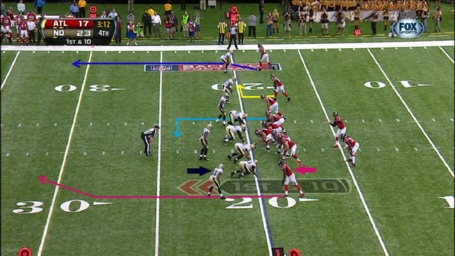 Greer jams Julio Jones at the line of scrimmage and runs stride for stride with the talented Falcons wide receiver as quarterback Matt Ryan (#2, red arrow) looks to throw. 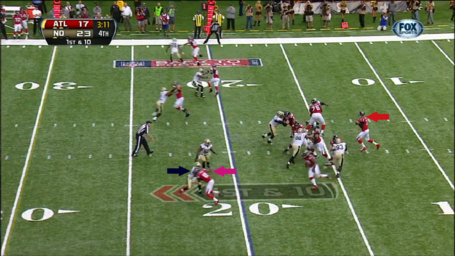 The Falcons run the equivalent of a "middle of the field" back-shoulder throw to perfection. 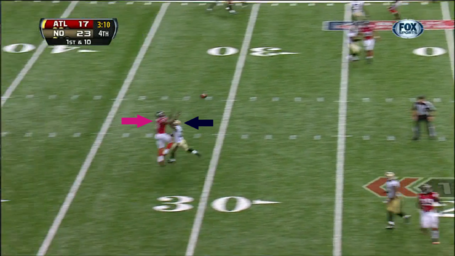 As the saying goes, "there is no defense for a perfect throw" and Jones gains 17 yards. 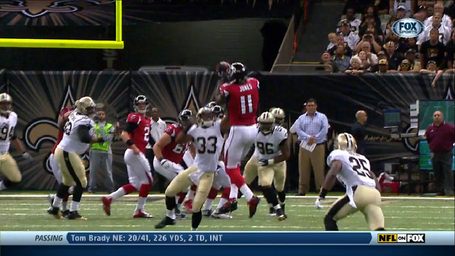 On the next snap, Atlanta runs the same exact seam route on the right side, with tight end Tony Gonzalez beating hybrid safety/cornerback Malcolm Jenkins for a 16 yards reception.

As the next frame shows, New Orleans then switches to a "Cover 2 Zone" (shown by the yellow line) to counter the success Atlanta's receivers had running past the press cornerbacks in the two previous plays. 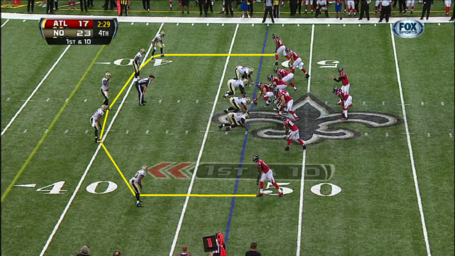 Adjusting to the Saints' zone coverage and under pressure from outside linebacker Junior Galette (#93, dark blue arrow), Ryan (#2, red arrow) dumps the ball off to running back Steven Jackson out of the backfield (#39, dark red arrow) while the Saints defenders that had dropped in coverage rush to tackle him (yellow arrows). 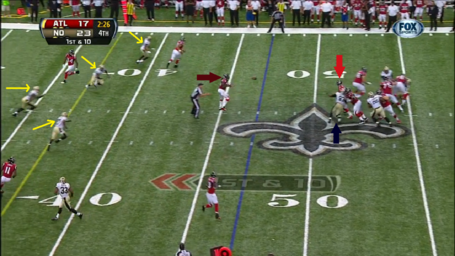 Jackson is tackled at the Saints 40-yard line after a gain of 7 yards. 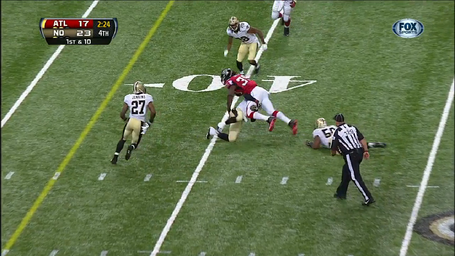 On the next play, the Saints run a defensive set reminiscent of the Gregg Williams' days. Seemingly getting back to a "Cover 2 Man", New Orleans sends safety Roman Harper (#41, dark red arrow) and cornerback/safety Malcolm Jenkins (#27, red arrow) on a double corner blitz. 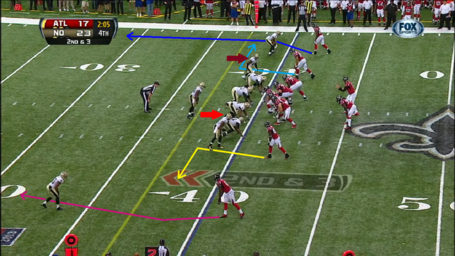 Unfortunately for the Saints, the blitz is picked up effectively by Atlanta's offensive line and Matt Ryan (#2, red arrow) has both Harry Douglas (#83, yellow arrow) and Tony Gonzalez (#88, blue arrow) wide open. He chooses Gonzalez. 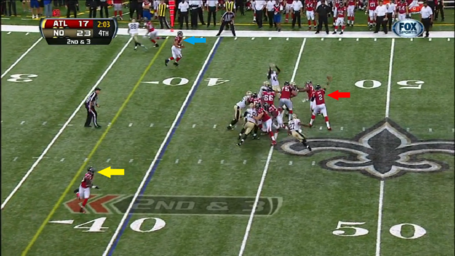 The all-pro tight end catches the ball with no one in sight and runs for 13 yards. Atlanta is at the New Orleans' 27-yard line at the two-minute warning. 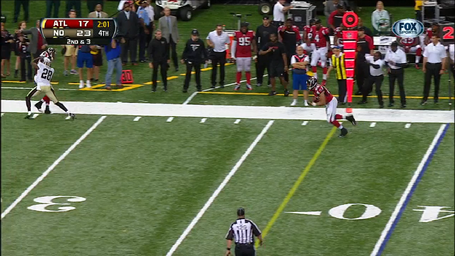 On the next play, after another flawless seam route by Harry Douglas who beats Malcolm Jenkins, Matt Ryan completes a beautiful 20-yard pass and Atlanta finds itself with first and goal at the Saints' 7-yard line.

The beautiful all-22 shot below shows the Falcons with two receivers on either sides of the offensive line, while the Saints greet them with four down linemen and a shallow "Cover 2" shell. 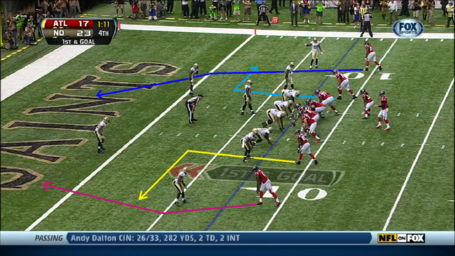 With a clean pocket, Matt Ryan (#2, red arrow) quickly opts to throw to Harry Douglas (#83, yellow arrow) who is running an out route from the slot position and is covered on the play by Saints' safety Malcolm Jenkins (#27, dark blue arrow). 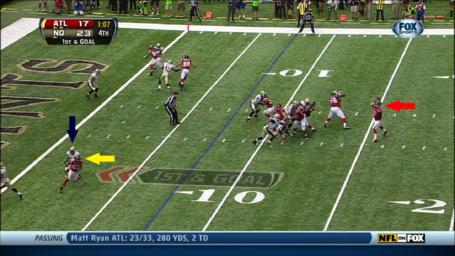 Jenkins blankets Douglas on the play and Ryan air-mails his pass. 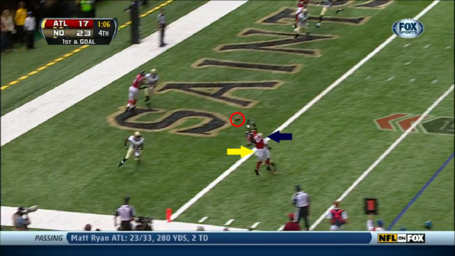 On second and goal, the Falcons gain 4 yards from a Matt Ryan pass in the flat to Roddy White. After taking their second timeout, the Falcons face third and goal at the Saints 3-yard line.

Atlanta lines up in one of its usual "Trips Left" formation while the Saints, for the first time in this drive, use a variation of the "Amoeba Defense."

In this exotic alignment, only defensive end Cameron Jordan (#94, dark blue arrow) has his hand on the ground and looks certain to rush the quarterback. The other players of the defensive line all stand and walk around. The objective is to confuse the offensive line in their protection assignments as far as who is rushing the passer and who is dropping back in coverage. 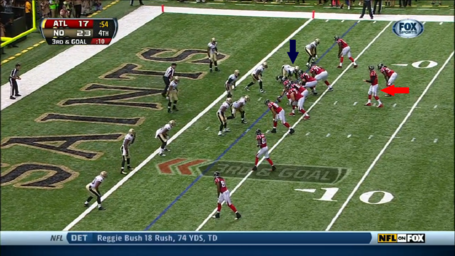 As the ball is snapped, running back Steven Jackson (red arrow) shoots out of the backfield. Saints' linebacker Ramon Humber (yellow arrow) immediately runs towards him. The X-factor in this picture is wide receiver Julio Jones (blue arrow). 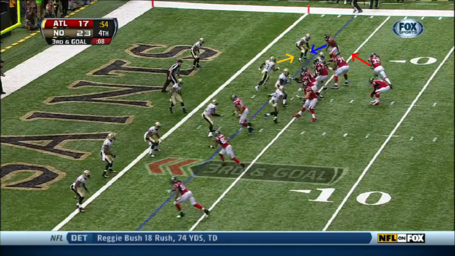 After what initially appeared to be a flat route, Jackson (red arrow) cuts back inside. Julio Jones (blue arrow) then runs a perfect pick on Humber (yellow arrow) to impede his way to the Falcons' running back. 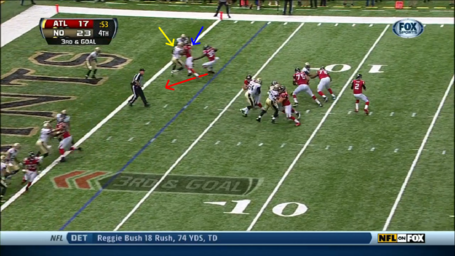 The way is now open for Jackson to receive the impending pass as Humber tries to recover. 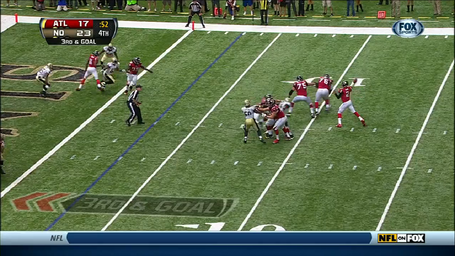 He drops the ball and New Orleans stays alive. Fourth and goal!!! 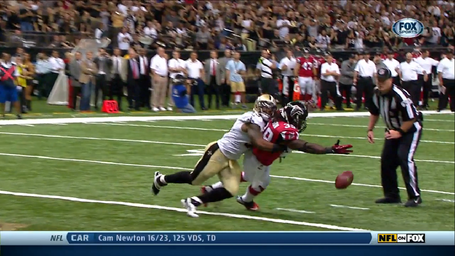 On fourth down, the chess game continues. The Falcons line up with the same ‘Trips Left/Single Right" formation. The Saints, once again, counter with their "Amoeba Defense." 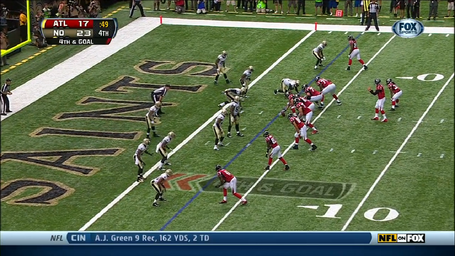 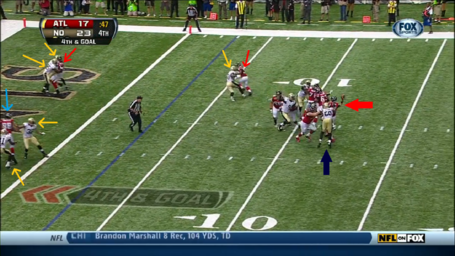 Pictures best describe the finale of this epic defensive stand by the New Orleans Saints. 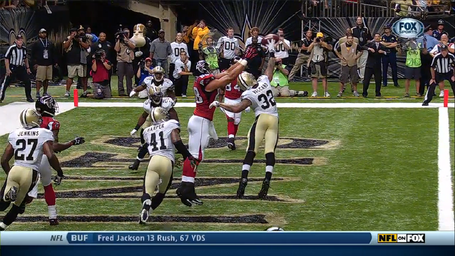 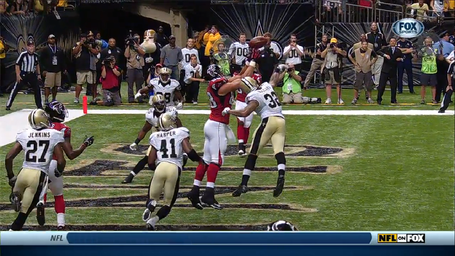 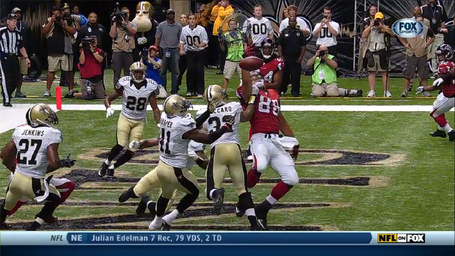 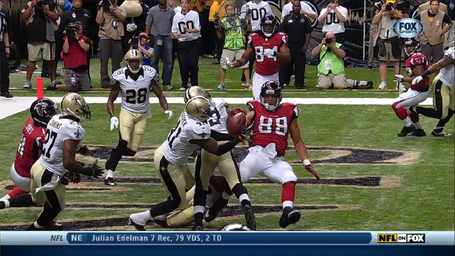 Yes, Roman Harper held on to the ball!!!