In a 31-7 win over the Arizona Cardinals on Sunday, Saints quarterback Drew Brees threw three touchdowns and rushed for another. He was also sacked four times and has now been sacked 10 times in three games. Our film breakdown shows that the Saints offensive line woes can be summed up in one word: inconsistency.

"You are what your record says you are."

Should we go by Bill Parcells' famous saying, there shouldn't be much to complain about concerning the 3-0 New Orleans Saints early in the 2013 season. New Orleans however, has shown some flaws despite coming out victorious in each of its game so far.

Perhaps the most glaring weakness has been the Saints typically reliable offensive line. In only three games, Saints quarterback Drew Brees has already been sacked 10 times. At this pace, the Saints 100 million dollars man will be sacked over 50 times in the regular season alone.

Considering that in the Sean Payton era (since 2006) the Saints have allowed an average of 21.1 sacks per season and only 1.2 sacks per game (playoffs included), the 2013 protective unit is shaping to be the worst in the last seven years of Saints football.

This decline isn't all that surprising. Since their superbowl year in 2009, notable Saints offensive linemen losses include center Jonathan Goodwin (now with San Francisco), all-pro left guard Carl Nicks (now with the Buccaneers) and this past offseason, pro-bowl left tackle Jermon Bushrod (now with the Bears).

Making matters worse, Saints all-pro right guard Jahri Evans has been nursing various injuries (not counting the dislocated kneecap, crippling migraines and sports hernia that Sean Payton is surely hiding from all of us).

Not all is bad however. For instance, despite allowing four sacks against the Cardinals on Sunday, New Orleans' O-line played well at crucial points in the game.

As the film breakdown shows, the Saints' offensive line is having a severe case of "split personality disorder." For Saints fans' sake, hopefully they'll quickly figure out who they really are: the good Doctor Jekyll or the bad Mister Hyde.

Trailing 7-0, The Saints had the ball at the edge of the red zone at the Cardinals 21-yard line. Pre-snap, Brees reads the defense, which shows a four-man front with the threat of bringing extra-pressure with a fifth defender in inside linebacker Jasper Brinkley (dashed red arrow). Strong safety Yeremiah Bell (dashed blue arrow) is likely to drop deep, creating a void that could be exploited by Lance Moore running a slant (yellow arrow) towards the middle of the field. 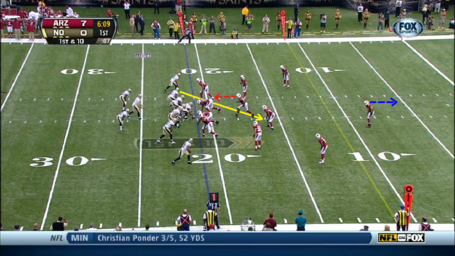 If Brinkley (dashed red arrow) blitzes, with all the other defenders occupied by Saints potentials targets (blue arrows), it would clear the middle for Lance Moore (yellow arrow). This is where Brees looks first. 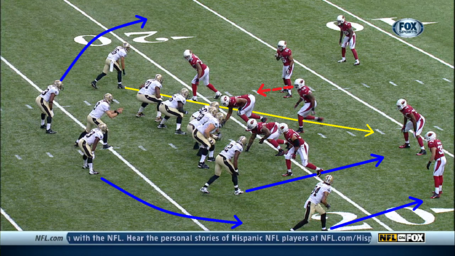 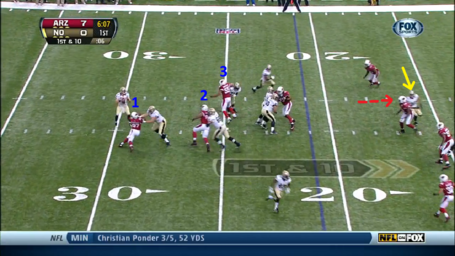 Brees (red arrow) never had a chance. He is sacked by Dockett (blue arrow) for a six-yard loss to the Cardinals 27-yards line under the helpless eye of Tim Lelito (yellow arrow). Welcome to the NFL, rookie undrafted free agent. 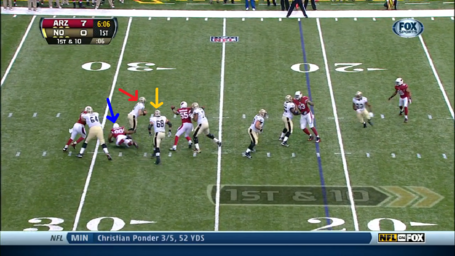 Doctor Jekyll (The Good): Second and 16 at the Cardinals 27-yard line.

On the very next play, the Cardinals decide to change it up and actually rush five defenders. Saints tight end Jimmy Graham runs a go route from the slot (yellow arrow). Wide receiver Robert Meachem runs a corner route (red arrow) and running back Darren Sproles runs a stop route from the flanker position. As the ball is snapped, the Cardinals defenders at the bottom of the screen are backpedaling (pink arrows) to keep the Saints receivers in front of them. 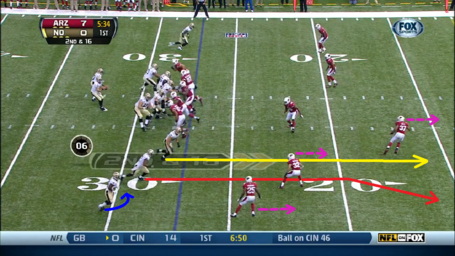 The beauty of this play is in its execution at every level of the offense. The line this time, gives quarterback Drew Brees a clean and large pocket (yellow circle). Brees fakes a dump-off to Sproles (blue arrow), drawing the defenders forward while Meachem and Graham are racing past them. 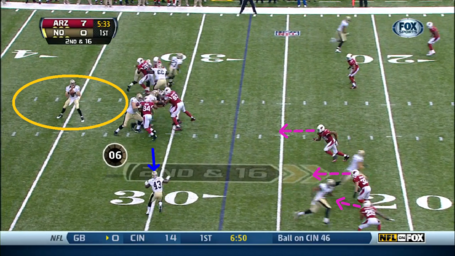 Brees throws deep to Meachem without being touched by a defender. 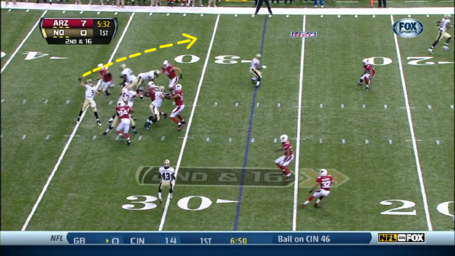 With the ball in the air (yellow circle), Meachem (gold arrow) is behind Cardinals cornerback Jerraud Powers (pink arrow). The safety help from Yeremiah Bell (red arrow) arrives too late. 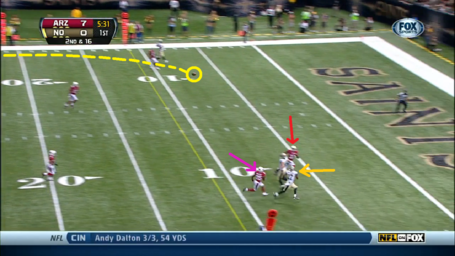 Touchdown! The Saints tie the game at 7 and go on to score the last 24 points of the game in a convincing 31-7 win. 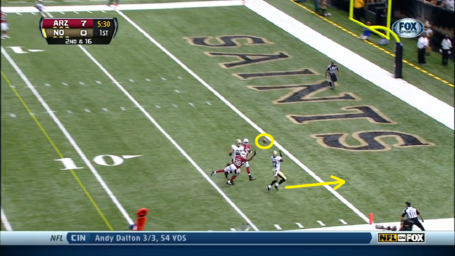