HansDat faces a bit of a moral dilemma in helping introduce his grandson to NFL fandom.

Share All sharing options for: A House Divided: One Grandson, Two NFL Teams

As you may recall me discussing now and again here on CSC, I have been enjoying my role as grandfather over the last two years.

In fact, just yesterday, Mrs. H and I got to have a fun early afternoon play date with Jaxson at his house. We read books, played tumbling games, and then took him for a walk around the neighborhood. And later that day, in surprise bonus time, we joined him and his parents as they went to the Louisville Zoo (which is just minutes from our house) for a late afternoon walkabout near closing time. What a splendid day that was!

But there's one part I've struggled with. Mrs. H and her family are originally from St. Louis, so they follow the Rams. And you know how I feel about the Saints. So what's a grandfather to do?

I want to respect the culture and NFL traditions of his dad's family, but I also want to have him say "Who Dat!" and love the Saints, too. Further muddying the waters of this issue is that Jaxson was born on Sean Payton's birthday! How about that? The universe seems to be saying something to us here, but I'm not sure what the exact message is.

As one way of dealing with this, prior to the Cardinals game, I adorned our refrigerator door thusly, taking a picture of him in a Rams jersey and framing it in a Saints schedule magnet border: 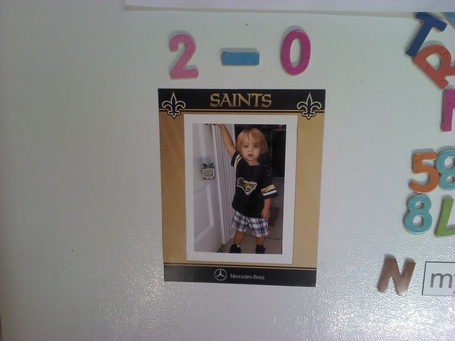 But is this enough? When my parents came to visit last December, they brought Jax a plush Saints-themed stuffed Gumbo dog that folds into a football, but I haven't bought him a t-shirt or really tried to exert any real pressure on getting him into the Who Dat spirit yet. How can I do this going forward? Should I be doing more? Can any of you who have dealt with divided NFL houses like this advise me?