Welcome to the first installment of "Impact Drive." Each week after a Saints game this upcoming season, we will dissect a drive (with New Orleans either on offense or defense) that played a pivotal role in the outcome of the game. While looking forward to New Orleans' season opener against Atlanta on Sunday, today we take a look back. Here's a film study of the critical drive that sprung the Saints to a thrilling victory against the Falcons in the Mercedes-Benz Superdome last year.

The rivalry between the New Orleans Saints and the Atlanta Falcons dates back to the 1960s. The winning streaks between the two teams have gone back and forth over the decades but lately, the Saints have had the upper hand. Since 2006 and the arrival of Sean Payton in the Big Easy, New Orleans is 11-3 against Atlanta.

Last year, in the absence of the suspended Payton, the Saints and Falcons split their two regular season meetings. In the first game in New Orleans on November 11 2012, the Saints were victorious by a narrow margin, 31-27. Surprisingly, the home team's victory wasn't secured, as is often the case, by their perennial juggernaut of an offense.

Everything you could possibly want or need to know about the Saints' Week 1 matchup against the Atlanta Falcons.

Trailing 31-27 with 5:54 left in the fourth quarter, the Falcons marched the ball from their own 20-yard line all the way down to the Saints one yard line and had multiple chances to score and take the lead. The much-maligned Saints defense made a gutsy goal line stand, keeping Atlanta out of the end zone and denying them their best chance to win the game. That critical drive is the subject of today's Impact Drive.

We start our film study after a 7-yard pass from Matt Ryan to wide receiver Roddy White, followed by an incomplete pass from the Falcons quarterback to White. The Falcons faced a third down and 3 at their own 27-yard line.

As shown in the picture below, the Falcons started the play with quarterback Matt Ryan (#2, red arrow) in the shotgun, a three-wide receiver (WR)/one tight end (TE) set and a running back (RB) in the backfield next to Ryan. The Falcons 3-WR/1-TE/1-RB personnel was comprised of wide receivers Roddy White (#84, dark blue arrow) and Julio Jones (#11, pink arrow) on the left side of the offensive line, Harry Douglas (#83, green arrow) and tight end Tony Gonzalez (#88, light blue arrow) on the right. Next to Ryan, was running back Jacquizz Rodgers (#32, yellow arrow). The Saints started the play in a 3-4 alignment, with three defensive linemen (black jerseys). 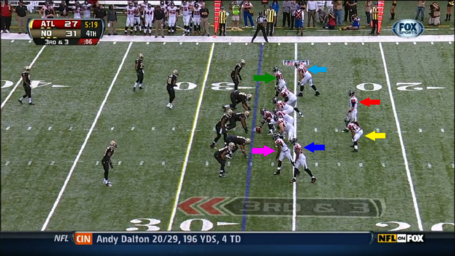 The next frame shows that the play is designed to isolate running back Jacquizz Rodgers on Saints middle linebacker (and former Falcon) Curtis Lofton (#50, gold arrow) aiming to exploit the speed and quickness of Rodgers against the slower Lofton. In order to do so, the Falcons have to clear the flat for Rodgers and execute the play to perfection. Wide receiver Roddy White runs a post route (thin blue arrow) to occupy Saints cornerback Patrick Robinson (#21, dark blue arrow), while Julio Jones runs a slant route (thin pink arrow) towards the right side of the field, taking the attention of Saints cornerback Johnny Patrick (#32, dark purple arrow). Simultaneously, Rodgers runs a quick out route (thin yellow arrow) and is almost inevitably going to be open on the pass play. 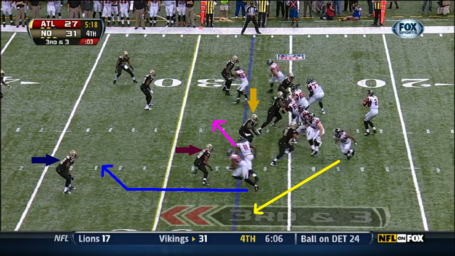 As Matt Ryan (#2, red arrow) winds up to pass, Roddy White (#84) and Julio Jones (#11) have done their job. With the flat cleared, Rodgers (#32, yellow arrow) has created about a 2-yard separation between him and the now trailing Curtis Lofton (#50, gold arrow). 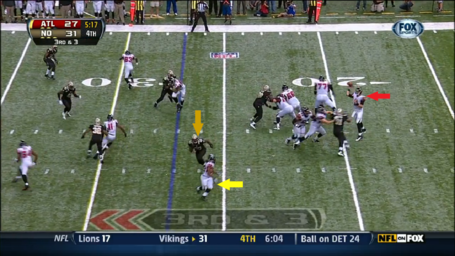 Rodgers catches Ryan's pass and the rest of the play is a full display of the Falcons running back's talent. Using Lofton's own burst against him, Rodgers suddenly puts on the brakes. 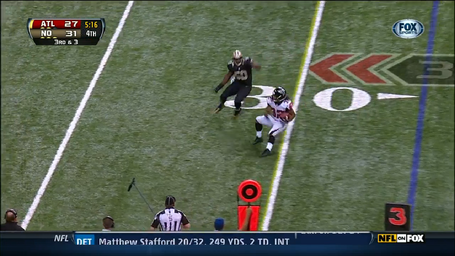 Lofton slides harmlessly by and Rodgers rushes forward for a 14-yard gain. 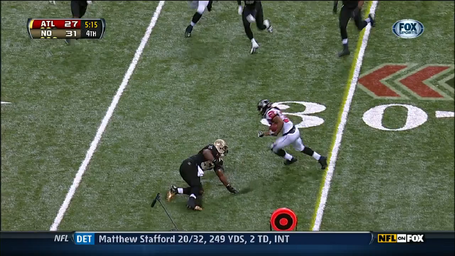 Having avoided a potentially crippling three and out, the Falcons found themselves in another third down situation after an incomplete pass from Ryan to tight end Tony Gonzalez followed by a 6-yard pass to reserve running back Jason Snelling.

Prior to the snap, the critical part of the Falcons play is a trips right bunch formation, consisting of wide receivers Harry Douglas (#83, green arrow), Roddy White (#84, blue arrow) and tight end Tony Gonzalez (#88, light blue arrow). At the line of scrimmage, the Saints show a 4-3 alignment with four down linemen. 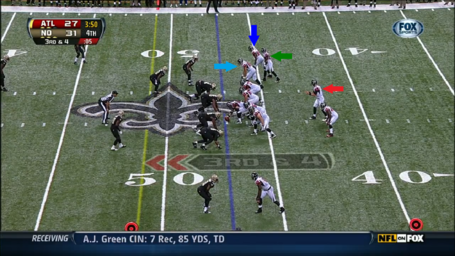 The bunch formation is designed to create confusion within the defense by having the three receiving targets start their route from virtually the same area of the field and quickly diverge. It will only take a slight hesitation by any of the defenders to leave at least one of the receivers open. The following picture shows the patterns utilized by the Falcons' bunched receivers on the play: tight end Tony Gonzalez runs an in route (thin light blue arrow), while wide receiver Roddy White runs a shallow corner route (thin blue arrow). At the same time, wide receiver Harry Douglas runs an out route towards the right sideline (thin green arrow). 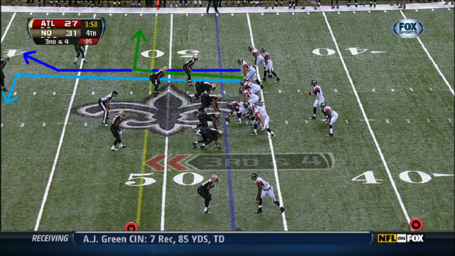 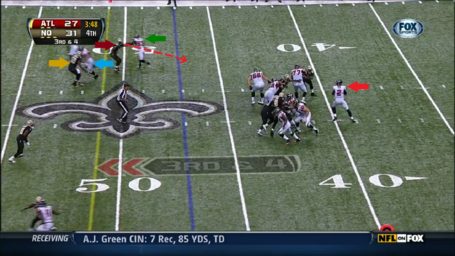 As the ball is in the air (red circle), Douglas (#83, green arrow) has gained the necessary separation from Patrick (#32, dark red arrow). 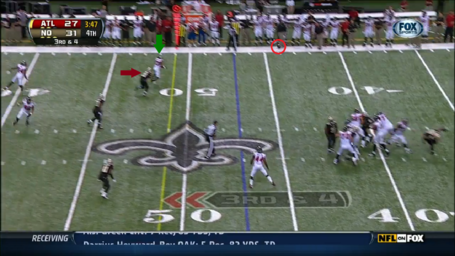 Douglas catches a 5-yard pass and turns it into an 8-yard reception. 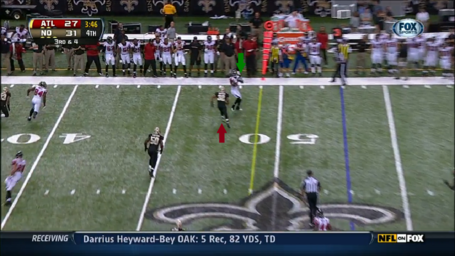 Having staved off the threat of another 4th down in their own territory, the Falcons would proceed to gain 35 yards in the next two plays. First, a 17-yard pass from Matt Ryan to Tony Gonzalez to the Saints 28-yard line, followed by an 18-yard run from Jacquizz Rodgers down to New Orleans 10-yard line.

With first and goal at the 10, Atlanta looked poised to take the lead against a Saints defense on its heels. Having been successful with the bunched-receiver formation three plays earlier, the Falcons opted for a variation of the same play. 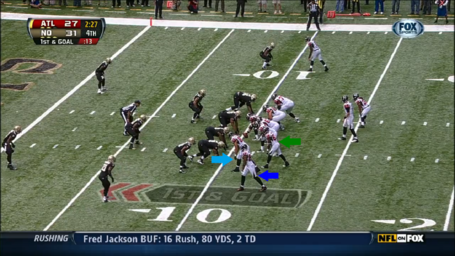 The next frame shows the creativity of the play design. As with the previous alignment, Roddy White is lined up at the Z-position (on the outside, off the line of scrimmage) and runs a corner route (thin blue arrow). Tony Gonzalez, similarly to the earlier play, runs a post route (thin light blue arrow). The subtle difference here is the route ran by Harry Douglas. Instead of an out route as in the previous bunched-formation play, Douglas fakes a quick out then runs a drag route towards the middle (thin green arrow). 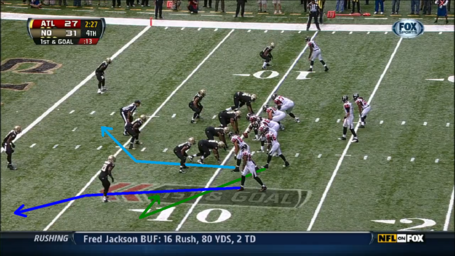 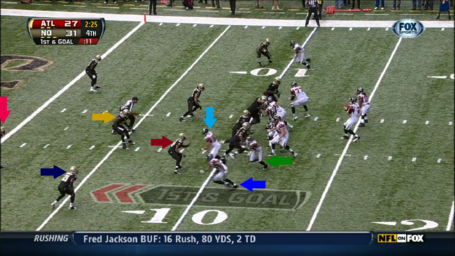 Unfortunately for New Orleans, Patrick follows with Gonzalez, leaving Harry Douglas (#83, green arrow) wide open as he gets into his break, awaiting the pass from Matt Ryan (#2, red arrow). 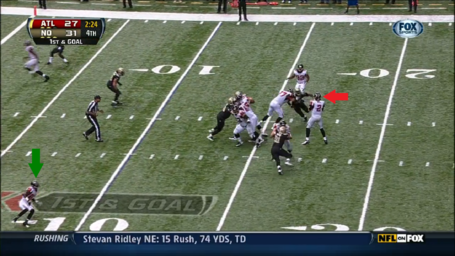 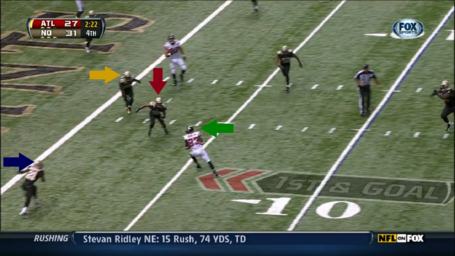 They stop him one yard short of giving Atlanta the lead. Their hustle will prove crucial. 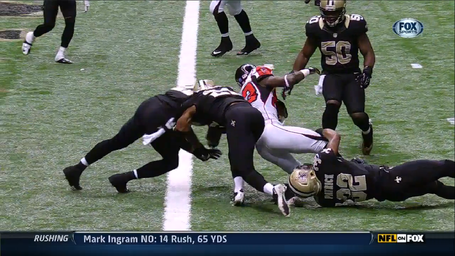 On second and goal from the one-yard line, the Falcons show a typical power running I-formation with quarterback Matt Ryan (#2, red arrow) under center. Running back Michael Turner (#33, indigo arrow) is in the backfield with fullback Mike Cox (#42, bright green arrow) and tight end Michael Palmer (#81, purple arrow) offset to the right as an extra blocker. Further selling a run play, Atlanta adds an additional offensive lineman in Mike Johnson (#79, brown arrow). The Saints greet them with their power goal line defense with six down linemen. 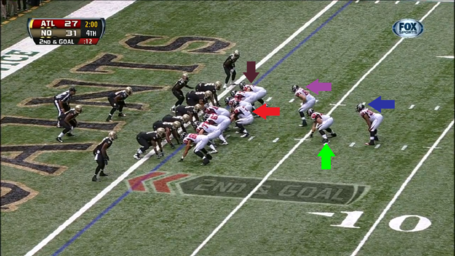 At the snap, the entire Saints defense rushes into the line of scrimmage, expecting a run play. Safety Malcolm Jenkins (#27, dark pink arrow) however, diagnoses the sequence as a play-action fake to the running back. Ryan (#2, red arrow) fakes giving the ball to Turner (#33, indigo arrow) and is about to turn to pass. Gonzalez (#88, light blue arrow) runs a drag route (thin light blue arrow) across the end zone with Jenkins on his heels. 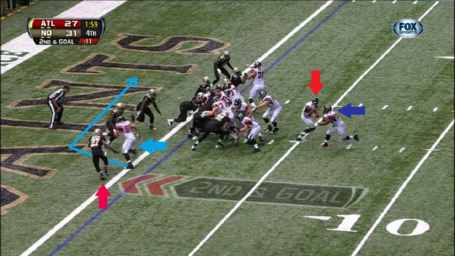 Despite Jenkins' rapid reaction, Gonzalez has gained about a one yard separation. For a player his caliber, that's usually more than enough to be an automatic pass completion. As Ryan throws the ball, it looks as though Atlanta is about to take the lead. 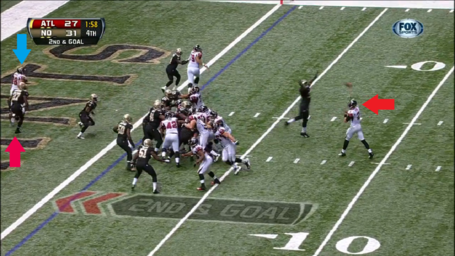 From a different angle, Malcolm Jenkins doesn't appear to have a chance. 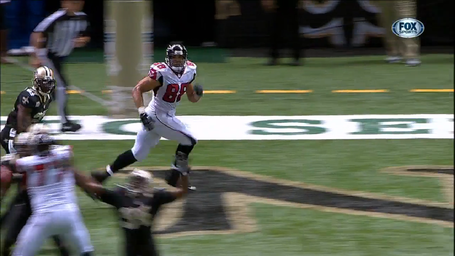 Not a chance...after all, they have no speed in the Big Ten. 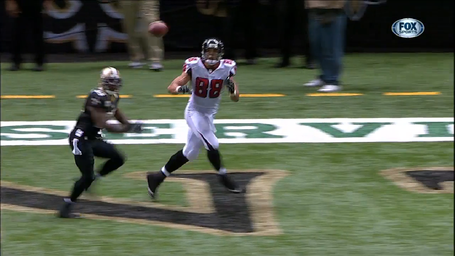 Yet the former Ohio State star begs to differ. With an amazingly quick leap, Jenkins gets his hand on the ball just in time to prevent a catch by Gonzalez. 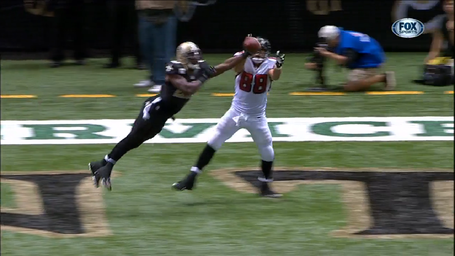 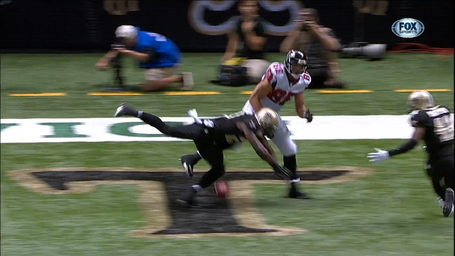 On third down, the Falcons tried actually running the ball with Michael Turner, but the play was stopped by the Saints defense, resulting in the loss of a yard. With 1.46 left in the fourth quarter and sitting at the two-yard line, it seemed a foregone conclusion that the Falcons would go for the touchdown on fourth down. They did. 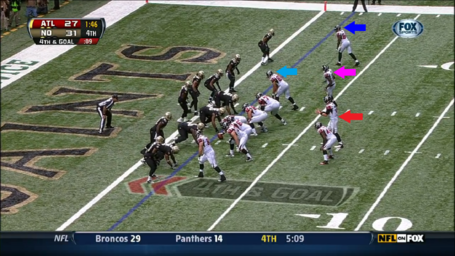 The play once again, is designed to exploit any type of miscommunication between the defenders. Roddy White runs a slant to the left towards the middle of the end zone (thin blue arrow) and is guarded by Saints cornerback Jabari Greer (#33, orange arrow). Julio Jones runs a quick out to the right (think pink arrow) and Saints safety Malcolm Jenkins (#27, dark pink arrow) is assigned to him. Finally, in what initially appears to be a complete mismatch, Falcons tight end Tony Gonzalez (#88, light blue arrow) runs a quick in route while being defended by Saints cornerback Johnny Patrick (#32, dark red arrow). 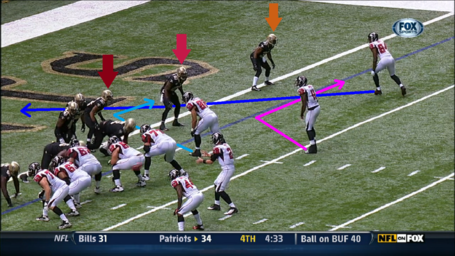 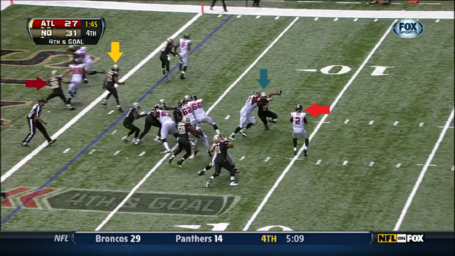 Faced with having to make a quick throw under pressure, Ryan opts to go for Roddy White (#84, blue arrow) in the end zone. White has actually gained inside position against Greer (#33, orange arrow) and appears to be in position to make the touchdown catch. 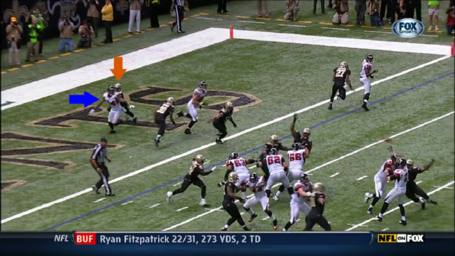 Greer however, like Jenkins two plays earlier, catches up to White and deflects the ball. The pass falls incomplete and the Saints get the ball on downs. 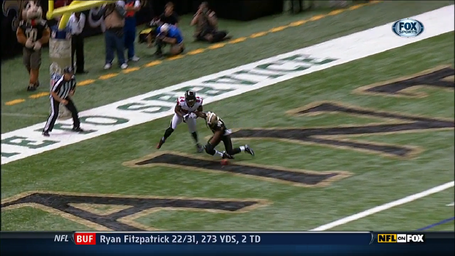 After a three and out by the Saints offense, New Orleans defense would actually stop Atlanta one more time, albeit in less dramatic fashion, to seal the victory. With the win, the Saints dealt the previously unbeaten Falcons their first defeat of 2012. The game marked the Falcons sixth loss in their last seven games at the Mercedes Benz Superdome.