On Saturday afternoon, the Saints face overwhelming odds, terrible weather, and the NFL's best team on the road. It's becoming apparent that Sean Payton wouldn't have it any other way. We take a look at why the Saints aren't the doomed team most think they are.

We all know the advantages Seattle has, perceived and real, going in to their Divisional playoff game with the New Orleans Saints. We also know the trends saying the #1 seed may be in danger of the upset due to recent postseason trends. In the Saints' favor are memories of teams like the 2010 Jets beating the Patriots in the Divisional round (Bart Scott's infamous "Can't Wait" game), avenging a Week 13 thumping of their own. In the Seahawks' favor are the coldly efficient DVOA numbers that the statisticians in the Emerald City hold so dear.

Through the lens of these two fan bases, this playoff game is providing a matchup of contrasting philosophical styles. Not just in an offensive philosophy versus defensive philosophy style, but a contrast in psychological styles. It's Pete Carroll and the 12th Man with advanced statistics and metrics against Sean Payton and Who Dat Nation with fluorescent Gatorade, fried chicken, and numbered sweatsuits. Seattle has done phenomenally over the past two seasons under Carroll and Russell Wilson. The "stat geek" approach has led to fantastic draft picks (like Wilson) that others may have overlooked and undervalued. It's almost a football version of Sabermetrics, and has turned around an underachieving franchise.

Although the regular season success has been undeniable, this is a big test coming up for the Seahawks. Look how metrics have ultimately worked out for baseball's Oakland Athletics under Billy Beane. The A's have consistently been playoff contenders and title pretenders. In the end, it's the quirky teams like Boston and San Francisco that have won the World Series with their unruly beards and ridiculous superstitions. The statistics may map out victory one way or the other, but it usually comes down to the intangibles and incalculable factors when two teams are this good and this well run. Although I'm fairly certain the Seahawks will be a far more successful postseason franchise than baseball's A's in the long run, metrics can't predict quite everything.

That's where Sean Payton comes in. New Orleans' own "Pied Piper of Popeye's" has come into this postseason with a completely different approach, and 1/4 of the way through it's been a smashing success. Thanks to the Saints' master motivator, we've been treated to gems like this from Coach Payton's Twitter account: 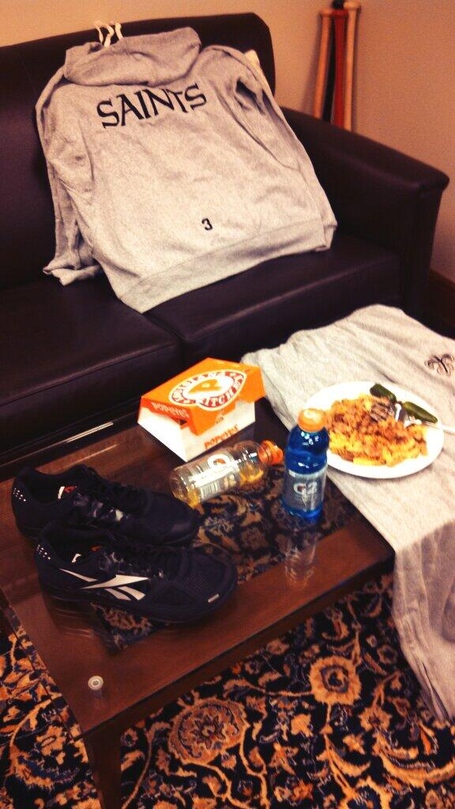 Last week, I went along with it, joined in the fun, and had a blast with the Popeye's, Gatorade, and sweatsuit tweet. It wasn't until this weeks Payton tweet that I actually realized what's going on here. Sean Payton is trolling Who Dat Nation. Not in a bad way, mind you, but in a spectacularly genius sort of way when you really think about it. With the playoffs approaching, Who Dat Nation was in a collective funk. Late season losses at Seattle, at St. Louis, and at Carolina had rattled the confidence of the fan base as hopes of a #2 seed and the home playoff game it provides were dashed away. Now the Saints had to go on the road, where they've never won in franchise history. The "Shook Ones" were out in force, and quite vocal. The fans were likely more concerned about the road woes than the team itself was. The team was more annoyed by the road dilemma, the fans were haunted by it.

In comes Sean Payton, giving us photos chock full of clues and Easter eggs, and here we are, eating out of the palm of his hand. "Did you see the new Gatorade color? Blue instead of green, and what's with the orange one behind it? What's with the peppers on the Beefy Mac plate? Is he saying he's bringing the heat on Saturday? New sweatsuits with the number 3 on them for three more victories. Did you see the bats in the background? Bat game!!!" On and on, Payton's gotta be loving this, and so must Popeye's and Gatorade's parent companies. These two have made some serious extra revenue on the psychological whim of a football coach.

It's this style of motivation that makes Sean Payton so special. He turned something so mundane and trivial into an interactive and unifying fan experience. At this point, I don't think it was his team that he was attempting to "psych up" with these tactics, it was the fan base. There has to be a tangible sense of the team feeding off the energy of the city and the supporters of the franchise. The Saints have a special relationship with their fans, no more substantial than the Seahawks and their fans, per se, but a unique relationship nonetheless. The Saints may feel emboldened knowing the fans are quite confident and have unwavering faith going into any road playoff game. That faith will face no greater test than Seattle on Saturday afternoon.

Sean Payton has taken the internal pressure off the team so they can focus on the true enemy, external pressure from the opponent. Who Dat Nation believes again, and an already close community has this silly interactive experience to share this postseason. No one wants it to end because it not only means the Saints are still alive for the Super Bowl, but also because we get to continue this silly exercise in chicken and Gatorade consumption and Twitter pics of the solidarity it has created. The Saints and Who Dat Nation stand hand in hand with careless abandon and house money on their side.

Should the Saints fall on Saturday, it's been a fun ride and an interesting season. The last two weeks have made up for many of the frustrations felt just a month ago. Seattle's the one with all of the pressure, and to argue that point would simply be an exercise in futility. Everything has lined up to work to the Seahawks' advantage, and we will see if they are prepared to take advantage of the moment. As I said following the December loss at Seattle, I choose to enjoy the rest of the season and this postseason. We've finally seen the road playoff win, the rest is house money, and the Saints know it too.