The New Orleans Saints are out to prove they can win their first-ever road-playoff game on Saturday against the Philadelphia Eagles. In order to do that, their first objective has to be to slow down Eagles running back LeSean "Shady" McCoy.

There are lots of clichés in the National Football League and I loathe every single one of them. But as you all know, we have to live with them and it is what it is. Wait, I'm falling into my own trap here. Please bear with me, it is New Year's Day as I'm writing this piece and the New Year's Eve festivities have slowed me down a bit. I guess I'll just take it one line at a time.

Enough with this silliness now, but I hope that I made you smile a little bit, especially if you're back at work today and maybe a bit grouchy.

Before I go any further, please let me wish you a Happy New Year, and for those of you whose favorite football team is still fighting for the Holy Grail known as the Superbowl, a happy playoffs season.

Back to my hated friends the clichés; when NFL coaches try with amazing futility to lure an opposing team into a false sense of confidence, they'll usually throw this praise at their best player: "we know we can't stop him; we can only hope to slow him down."

When New Orleans Saints head coach Sean Payton talks about the Philadelphia Eagles as his team prepares to face them in Wild Card playoff game this Saturday night, he won't be lying if he says those exact words about Eagles running back LeSean "Shady" McCoy.

In the 2013-2014 season, McCoy hasn't been stopped. In fact, he has barely been slowed down. He finished the year with an NFL-leading 1607 rushing yards on 314 attempts (which also led the league), an outstanding 5.1 yards average. But if you thought that was remarkable, there's more: McCoy had 52 receptions for 539 yards, a many yards as several number-two caliber wide receivers in the NFL. He recorded a total of 11 touchdowns (9 rushing, 2 receiving).

As Shady McCoy goes, so do the Philadelphia Eagles (10-6). With all the talk about how good quarterback Nick Foles has been (and he has certainly been good), it's been the running game that has been the backbone of the green birds in 2013. In five of their six losses, McCoy had less than 20 carries and failed to reach 75 yards rushing.

Conversely, McCoy rushed for at least 75 yards in 8 of the Eagles 10 wins, with a season-high 217 yards on 29 attempts in a home game against Detroit on December 8th 2013.

If the New Orleans Saints are going to earn their first-ever road playoff win in Philadelphia on Saturday, it is going to start with slowing down McCoy.

The Saints are ranked 9th in total defense by Football Outsiders, with a - 5.9% DVOA (for perspective, the Seahawks have the best defense with - 30% and the Cowboys have the worst with +19.2%).

This likely means that Saints defensive coordinator Rob Ryan is going to trust his cornerbacks to play man-coverage for most of the game and stack the box to somewhat reduce the threat of the Eagles running game.

What I'm about to show you in the frames below is what Ryan is going to have to deal with. Even when facing eight or nine-man boxes, McCoy has found ways to be productive. He has many qualities, but in this film breakdown, I will examine three of them: quickness, patience and great decision-making. Let's look at the tape.

The Eagles start this play at their own 39-yard line. The Cowboys are in a regular 4-3 alignment, with seven-men in the box and a safety slowly creeping up closer to the line to make it eight. They are playing man-coverage on the outside, with a single-deep safety. 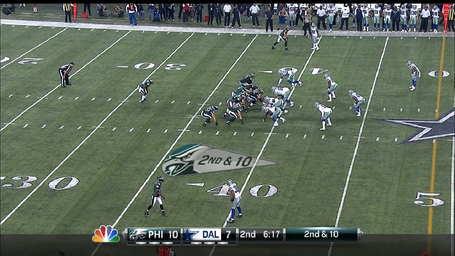 The play is designed to be a strongside run to the right, in the C-gap. The gap is the responsibility of Cowboys rookie linebacker Devonte Holloman (#57, blue circle). 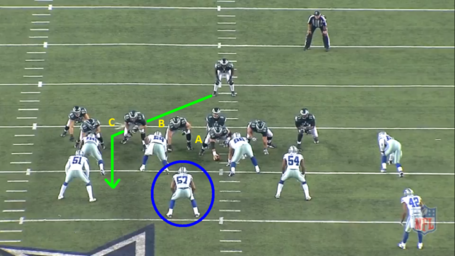 As the ball is handed to McCoy, Holloman diagnoses the run immediately and runs to the gap. 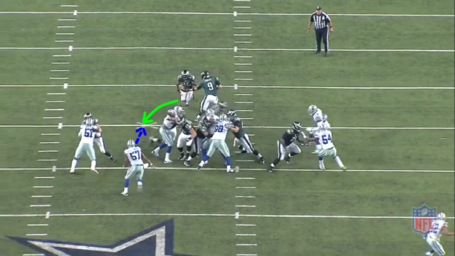 Anticipating the collision in the hole, McCoy starts to his right, causing Holloman to hesitate. 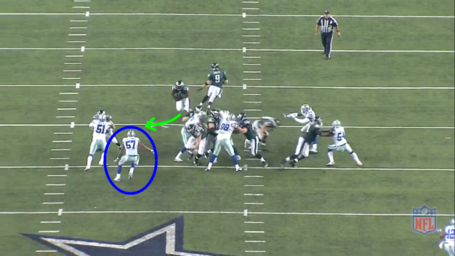 Holloman goes for the fake to his left; in the blink of an eye, McCoy plants his right foot in the ground and has a wide open gap to run through. 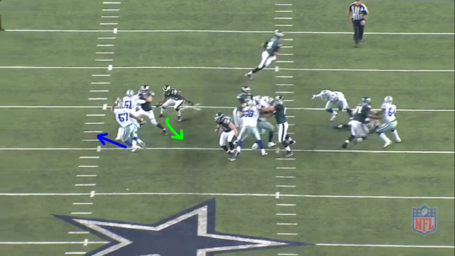 He shoots through the gaping hole for 16 yards. 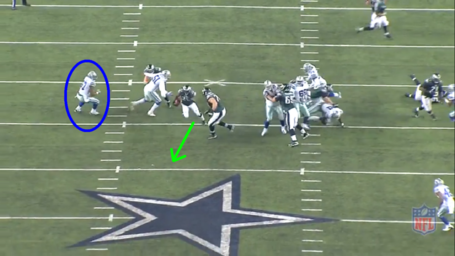 Billy GIF is not my lover.

In this play the Eagles start from their 49-yard line and are facing a seven-man front from the Cowboys. 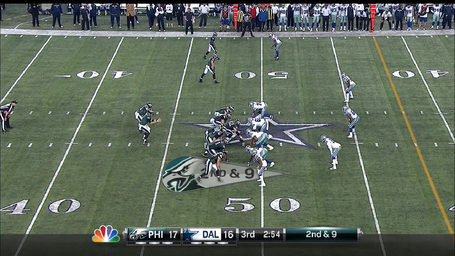 The play this time is a stretch run to the right that will illustrate how McCoy sets up his blocking and lets the cut-lane develop. 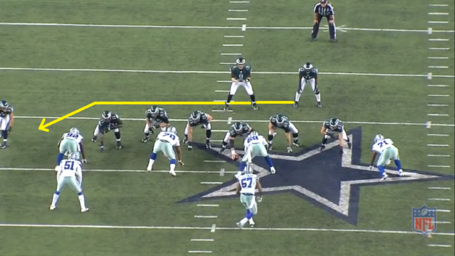 As he receives the ball, McCoy passes on the first lane and runs laterally, past the block on strongside linebacker Kyle Wilber (#51, blue circle). 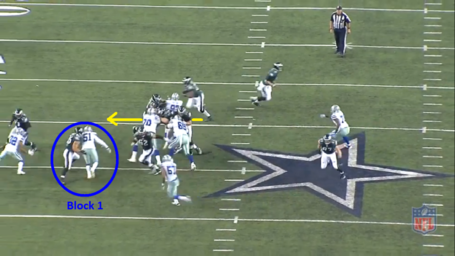 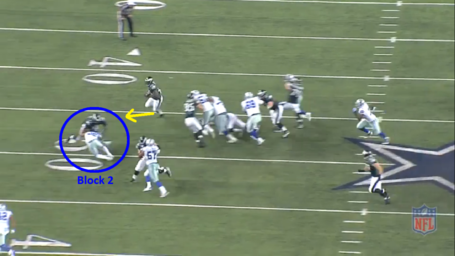 McCoy then smartly pulls up, letting the third and final block on Devonte Holloman (#57, blue circle) get past him. He also sees free safety Barry Church (#42, dashed red arrow) running at him. By slowing down, he'll use the block on Holloman as a screen to impede Church's tackling attempt. 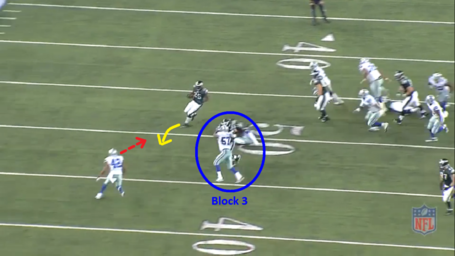 He cuts inside right behind the block, sheds the tackle of Church and cuts back upfield for a gain of 13 yards. 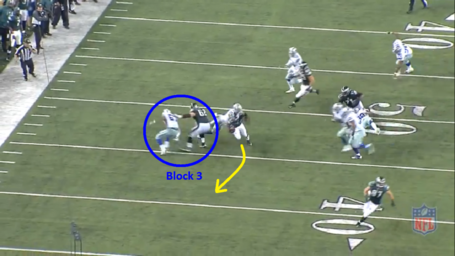 Don't waste your time, the doggone GIF is mine.

On the very next play, now on the Cowboys 38-yard line, the Eagles design an inside run for McCoy, with Dallas having only seven men in the box. 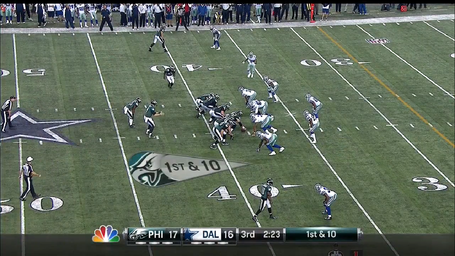 This time, the Eagles are trying to lure the Cowboys defenders to the strongside with an unbalanced line to the left. However, the run is designed to go through the A-gap on the weakside. 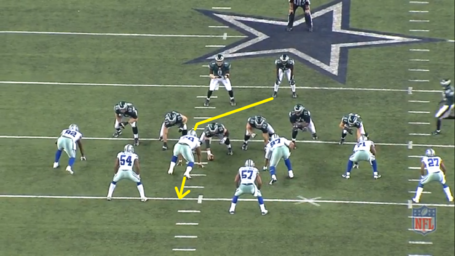 As the ball is handed off, there looks to be a hole for McCoy to run through as planned. 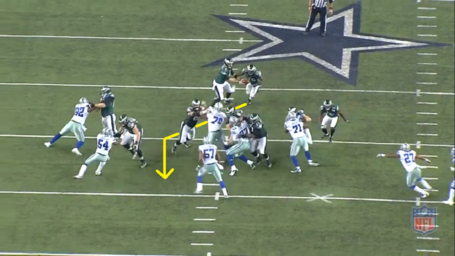 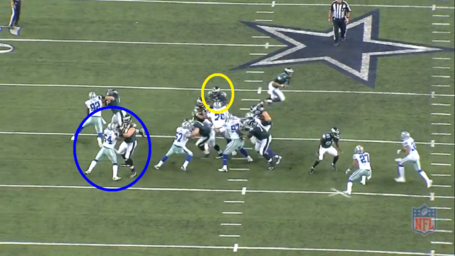 In the blink of an eye (yes, again) McCoy forgoes his designed run (dashed yellow arrow) and bounces outside. Raise your hand if you know a certain running back that would have banged his head on the wall inside and gained two yards.

Did I say that McCoy was quick? He is also fast and outruns a host of Cowboys to the sideline for a gain of 10 yards. 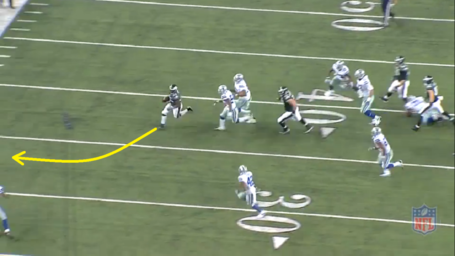 The GIF is bad...the GIF is dangerous.

We know one thing, if I was able to break down this tape, so was the Saints defensive staff. Here's to hoping that they gave a call to Leslie Frazier right before he cleared out his office in Minnesota. Why? McCoy had his shadiest performance of the year (sorry I couldn't help it) against the Vikings on December 15th 2013 with eight rushes for 38 yards.

Yes, LeSean McCoy is mortal. How did Minnesota do it? By racing to a 27-9 lead and forcing the Eagles to abandon the run, in a game the Vikings eventually won 48-30. What am I saying? I'm saying there's a chance.

(Thanks to Clay Wendler for his help with the GIFs)