With weather playing as large a role in Super Bowl XLVIII as the two teams playing in it this year, let's take a look back at past games where weather was not quite optimal.

Unlike any that has come before it, Super Bowl XLVIII features a storyline dominated by the prospect of historically inclement weather for the NFL's premier game. Never before has weather been such a huge story leading up to the Super Bowl and rightfully so, considering this is the first time the Super Bowl is being played in a cold weather city with an open air stadium. Now, Seattle, Washington and Denver, Colorado aren't cities unfamiliar with cold weather, but their teams may be facing the coldest test of their seasons at the time when all factors are usually even. In the end, it may not be the Seahawks and Broncos that are most affected by inclement weather as much as the patrons in attendance, the entertainers involved, and the stadium crew (who have tough enough jobs as it is).

Let's take a look back at the three most in inclement Super Bowls ever played, and their curious connections to the great city of New Orleans.

The coldest Super Bowl ever played was in New Orleans. Wait, is that right? Well, yes, the Super Bowl has been played in many cold weather sites but they all had domed stadiums. Ironically, it was New Orleans, a city famous for stifling humidity, that hosted the coldest outdoor Superbowl at 39 degrees. This was a bit of an anomaly since at the time, January temperatures in New Orleans averaged roughly 66 degrees. The Superdome had only broken ground six months earlier, making Tulane Stadium the site for the second time. Coats were absolutely in order that day. 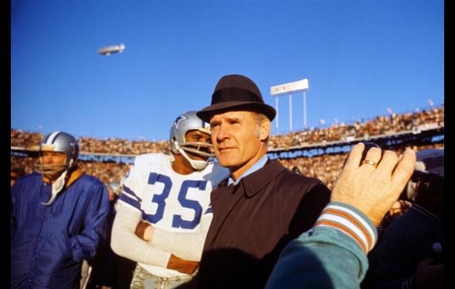 The cold didn't seem to bother Dallas as they steamrolled Miami, who must have been missing the South Beach Sun. Another inconvenience Super Bowl VI featured was a television blackout for the New Orleans market. Even though the Saints were not involved and Tulane Stadium was sold out, the NFL had unconditional blackout rules stating the Super Bowl could not be broadcast locally, in order to spur ticket sales.

And speaking of blackouts...

Now that the Super Bowl site in New Orleans had moved from "frigid" Tulane Stadium to the climate-controlled confines of the Superdome in the late 70's, what could possibly go wrong? Alright, there certainly wasn't any weather to deal with under the lights of the Dome, but about those lights. The infamous blackout caused the first delay in Super Bowl history (34 minutes). The images will certainly be long remembered. 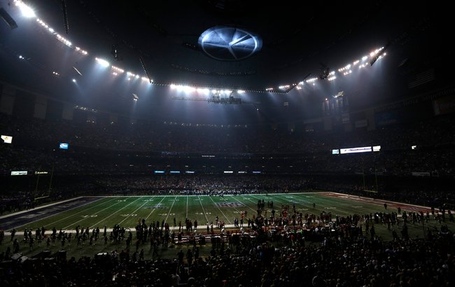 The bright lights of the Super Bowl stage, these were not. The power outage, which occurred early in the third quarter, had a surprisingly dramatic effect on the game. The Ravens led 28-6, on their way to a Super Bowl blowout right before the power failure. In a way, it represented a power failure for the Ravens themselves, as the Niners began a historic comeback which ultimately fell short. No thanks to the infamous blackout, Baltimore's reign as Super Bowl Champions ultimately came to light.

This is the grandaddy of inclement weather Super Bowls as it featured not only an inch of rainfall that lasted the entire game, but also wind gusts that reached up to 20 mph. This was the first Super Bowl to feature any rainfall and only the fourth to feature any wind to reach 20 mph or higher. What is most remembered about this game is that in his first Super Bowl appearance, New Orleans native, Peyton Manning picked apart the NFC's top defense to hoist the Lombardi trophy, but let's not forget the image it presented. 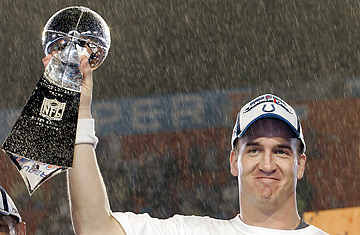 Despite the steady and persistent rain, Peyton Manning led the AFC's top offense to a convincing victory over the vaunted Bears defense. Devin Hester's opening kickoff return for a touchdown was the first and only highlight for Chicago as Indy won the game in a more convincing manner than even the final score would indicate. Peyton Manning "braved the elements" to go 25 of 30, for 247 yards, with one touchdown and interception each, earning the Super Bowl XLI Most Valuable Player award. Rain and wind ultimately didn't dampen the top offense or give an advantage to the top defense in this case. The largest effect the rain had on the game was in the five fumbles out of eight total turnovers. We will see if the elements will affect this year's matchup of top offense vs top defense.

Whether or not weather becomes an issue in Super Bowl XLVIII remains to be seen, but there is a chance that the elements will eclipse one of these three games. There also remains the chance that the NFL will get a picturesque Super Bowl like most seasons. Well, we just might have an image of Manning hoisting the Lombardi under snowfall, which would go down in history. Remember folks, Peyton may prefer these inclement Super Bowls anyway, seeing as the one with perfect conditions didn't go so well for him. Who Dat!