Saints Can Shock the Mighty Seahawks

Share All sharing options for: Saints Can Shock the Mighty Seahawks

The last time the New Orleans Saints played the Seattle Seahawks, it wasn't pretty. Well, that's of course, if you are a Saints fan. The game was pretty much over after the first quarter, when the Seahawks took a 17-0 lead and the Saints appeared to call one long pass play after another, seemingly oblivious to the fierce pass rush that was getting to quarterback Drew Brees.

Saturday night, in a road-playoff win in Philadelphia, Sean Payton and the Saints showed something we haven't often seen from them over the years: the capacity to abandon a faulty gameplan, swallow some pride, improvise and do what works.

In the first half against the Eagles, the Saints passed the ball 18 times, completing only 10 of those for 98 yards. They rushed 16 times for 94 yards (an outstanding 5.9 yards per carry).

With the run game working, Payton called 20 runs in the second half, against only 12 passes. It is still mind-boggling to fathom that Brees threw only 12 times in a half. That is usually the number of attempts he has in a quarter. The Saints finished the game with 185 yards rushing.

All I have heard and read about the upcoming divisional playoff game between the Saints and the Seahawks is how Seattle dominated New Orleans on December 2nd 2013 and how it is therefore bound to happen again.

Oh and of course, when taking in the nice works of our friends (cough) at Field Gulls (the Seattle Seahawks SB Nation's blog), I've also read that the Saints have about a 0.0215% chance of winning this re-match, as certified by the DVOA-metrics guru Agrapur Sundaram (if you don't know who he is, it is most certainly because you are ignorant and a member of Canal Street Chronicles, which of course is redundant, according to Sundaram and the extreme faction of his Field Gulls disciples).

All joking aside, as most of you know, I am actually a big proponent of Advanced Statistics and I thoroughly enjoy and recommend the works of the good folks at Football Outsiders. If you don't believe me read this piece here.

However, as inaccurate and absolutely misleading as "total yards" stats are, I do not think that even the most advanced of statistics can explain everything when it comes to sports.

To this effect, I'm concocting a piece on the subject (Advanced Stats vs. Any Given Sunday) that will be published here on Thursday. Prepare your pitchforks and boiling oil CSCers and Field-Gullies.

Here is why I think the Saints could sneak up (only figuratively) on the Seattle Seahawks this coming Saturday: they did so masterfully this past Saturday and the Philadelphia Eagles never saw it coming.

Let's face it: the Seattle Seahawks will have the better team on paper this Saturday and they dismantled the Saints in their earlier matchup. This means that unlike December 2nd when the Saints came in thinking they could just "play their game" and match the Seahawks, they will very likely come in with a different mindset. One that says: we have nothing to lose and we will go with whatever gives us the best shot to win.

This is the mindset that we saw on Saturday in Philadelphia. With the whole world telling them they had no chance to win, Payton and his team didn't mind going outside their usual comfort zone in order to win the game. One telling example (or three) is how they played in short-yardage situations.

With a 34-year old, 100 million dollars-worth quarterback, it has been extremely rare to see Payton use his prized quarterback in sneak plays in short-yardage. This is understandable: if you believe professional football players, rather ugly things happen under a pile. The smaller Brees could get seriously injured while sneaking in between the tackles, crushed by a 300-pound defensive lineman.

On Saturday, all those qualms went out the window; early in the second quarter, the Saints noticed that the Eagles' defensive alignment - three down linemen with the linebackers well off the line of scrimmage - could allow them to use the quarterback sneak on third and short-to-go situations.

On this play, defensive end Fletcher Cox (#91, green circle) plays at the 1-technique (outside shoulder of the center). Brees has the option of going in the A-gap on either side of center Brian De la Puente. 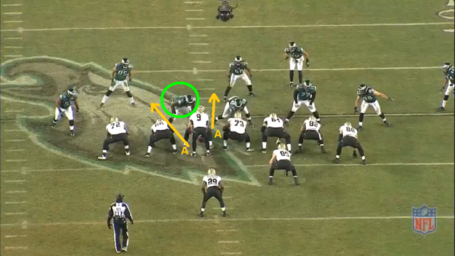 New Orleans then puts tight end Jimmy Graham in motion to the left (red arrow), prompting the Eagles and Cox to shift to their right, anticipating a run to that side. That widens the running lane in the left A-gap, and allows center Briand De la Puente and right guard Jahri Evans to double up on defensive tackle Bennie Logan (#96, blue circle).Brees sneaks easily for a four-yard gain. 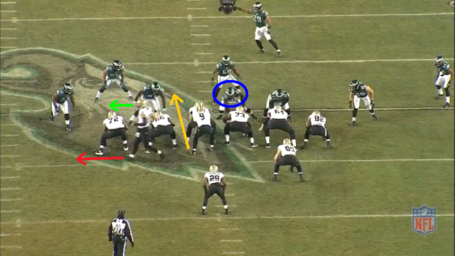 I don't know but I've been told: GIF-legged woman ain't got no soul.

Seeing how well the previous play worked, the Saints weren't afraid to go back to the well. They once again took advantage of the Eagles defensive front, this time with the help of a big push by fullback Jed Collins.

I want a whole lotta GIFs

Finally, to completely annihilate all chances for an Eagles to come back, the Saints used their "secret" sneak play one last time, with the same result.

There's a lady who's sure, all that glitters is GIF

Are the Saints going to sneak it three times against the Seahawks? Let's pray to Marie Laveau that they don't (I know that even without being a literate member of Field Gulls, you know who she is. And if you don't, all I have to say to you is: Google)

What we can be certain of however is that the Saints will break tendencies. Whatever Seattle saw on the field on December 2nd last year, they can bet that they'll see a vastly different team, playing with a vastly different mindset next Saturday.

Now we all know that if the Seahawks players read the excellent and very intelligent work done at Field Gulls like we attempt to do, they are already gameplanning for either Carolina or San Francisco in the NFC Championship. If you ask me, that bodes pretty well for the Saints.

(Thanks to clay Wendler for his help with the GIFs)