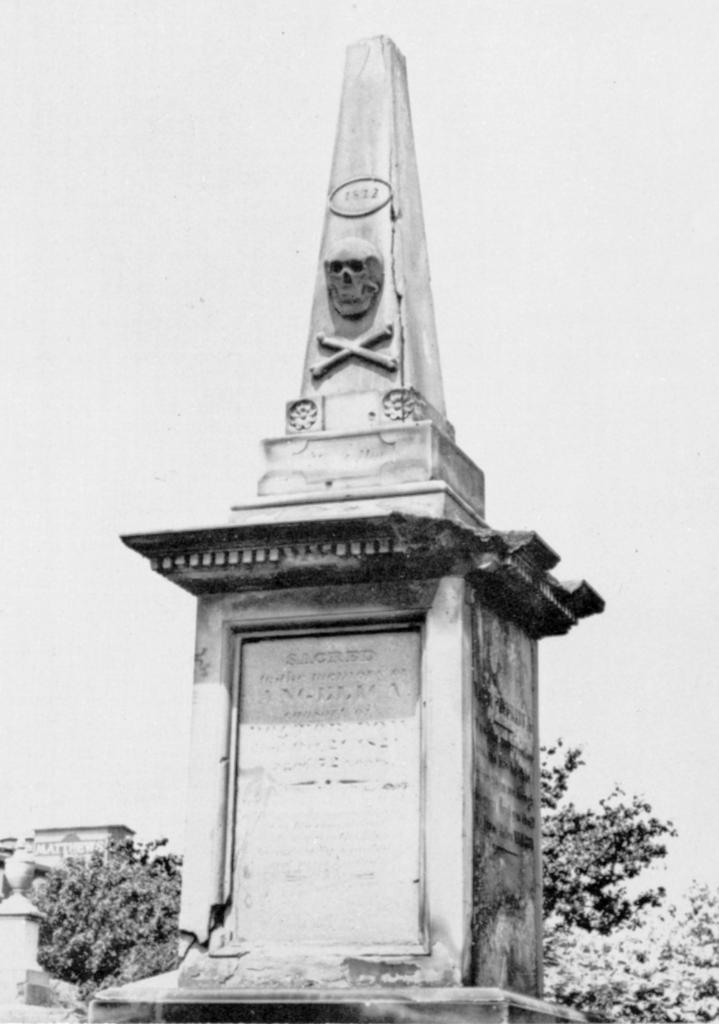 Memento Mori. This Death's Head, a monument to Angelica Dow, greeted visitors at the entrance of Girod Street Cemetery.

New Orleans has never been an especially healthy place to live. Étoufée, roast beef po-boys with gravy, fried seafood, muffalettas, beer, and pralines may make a pretty good breakfast, but they’ve never promoted a great deal of longevity. Before drainage, vaccinations, and modern sewerage, however, things were much, much worse. An inventory of those buried at Girod Street in July to December of 1841 reveals a laundry list of antebellum mortal ailments. Only five of 137 deaths were from accident or old age. Other causes ranged from the terrifying-and-bizarre to the more-familiar-but-still-terrifying: tuberculosis; meningitis; encephalitis; influenza; gangrene; malaria; typhoid; infection from teething; delirium tremens and "mania a potu" (both due to alcoholism); hepatitis; dysentery, gastritis, and ulcerated and inflamed bowels (nineteenth century New Orleanians loved their bowel diseases); and, of course, the ever-popular yellow fever. 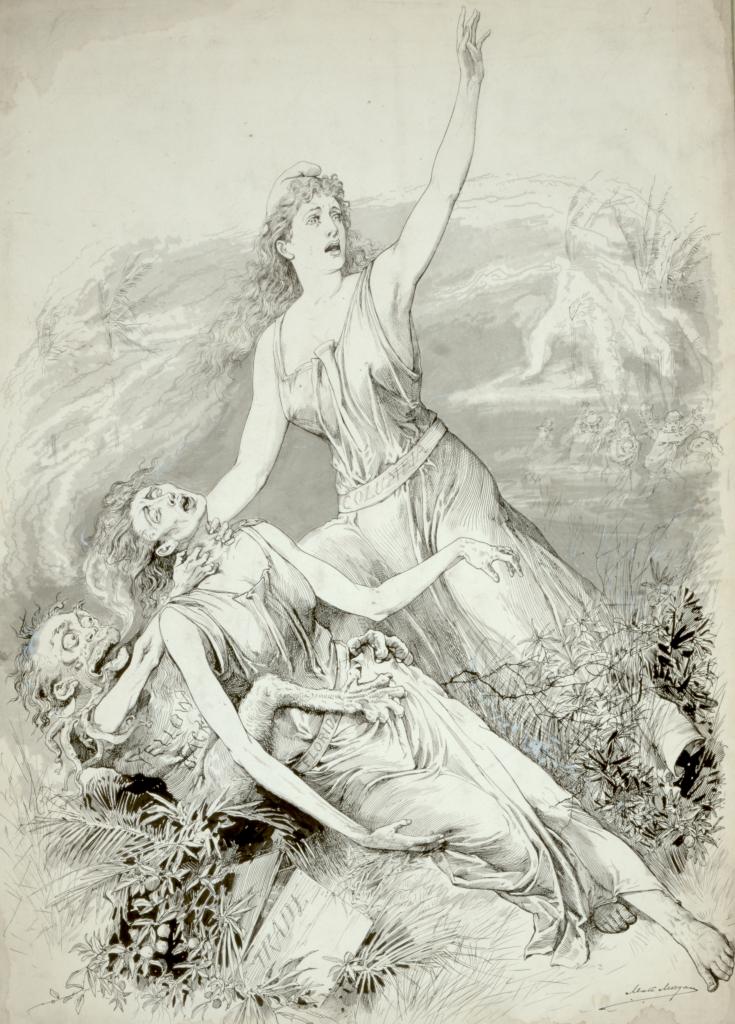 America was hot when she was young. Here "Columbia" cries for help as Yellow Jack strangles the State of Florida, who at 43 already looks like a catcher's mitt. Sunscreen, woman, sunscreen! From Frank Leslie's Illustrated Newspaper in 1888.

"Yellow Jack," as it was commonly known amongst sailors (also known by the more poetic and alliterative "Saffron Scourge"), was the bane of New Orleans during the nineteenth century, cropping up 67 out of 100 summers. Like many mosquito-borne diseases, it showed up as a set of "flu-like symptoms." The second stage of the disease was less common, and somewhat less pleasant--a hemorrhagic fever that caused internal bleeding as well as liver and kidney failure, seizures, and delirium. The liver failure and subsequent jaundice lent the disease its common English name, while the internal bleeding of the stomach gave rise to the Spanish Vomito Negro.

The 1853 epidemic was among the worst, and a busy time for Girod Street. More than 230 deaths were reported in a single day in August of that year. This was twice the normal weekly death rate in New Orleans at that time. In fact, Yellow Jack killed more than 1,300 people each week of that month. A smaller cholera epidemic ran through the city’s slums that same summer and fall. Canal Street was empty, but for the steady procession of hearses and wagons hauling coffins. 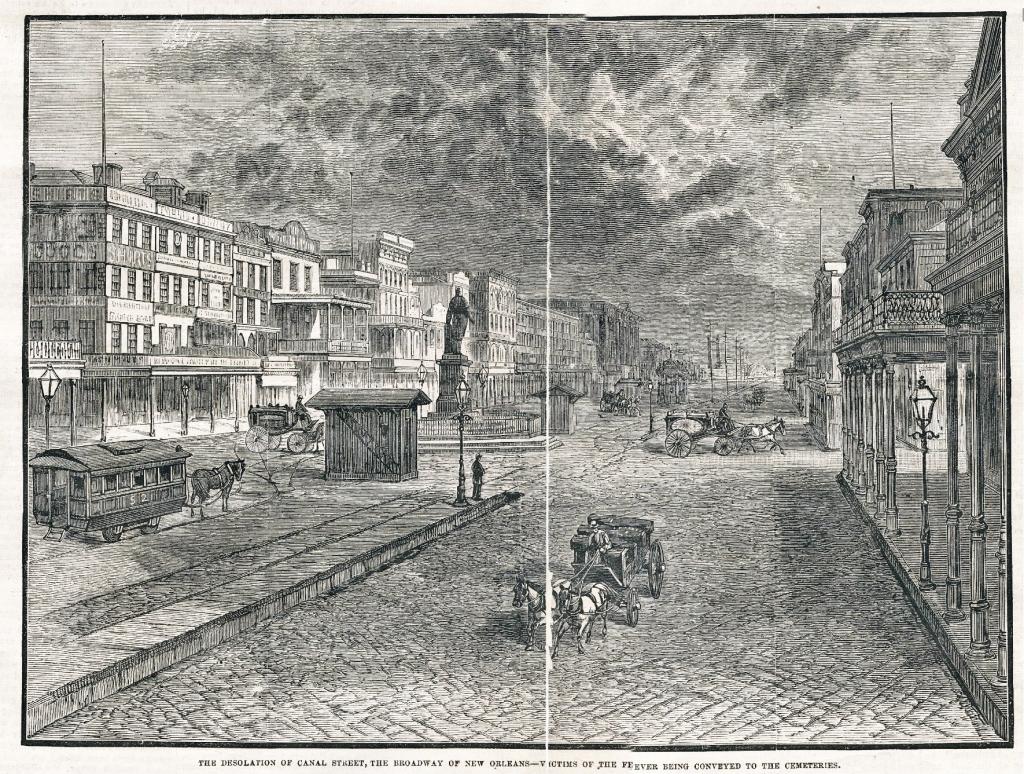 "The Desolation of Canal Street," August, 1878. The main street of one of the busiest port cities in the world, empty except for hearses and the wagons of corpse-carriers. From Frank Leslie's Illustrated Magazine.

Immigrants and newcomers were hit especially hard; 1 in 5 Irish immigrants died that year, victims of the areas in which they worked by day in the swamps as ditchers, as well as the shacks in which they slept at night, often next to their worksites. Slaves were considered too valuable for this work; the Irish were cheaper and expendable. (Why does this make me think of Blazing Saddles? Probably because everything does.)

Girod Street, given its central location, was one of the favored cemeteries during these outbreaks, and yellow fever victims were interred in mass pit graves there during the 1850s. The last Yellow Fever outbreak occurred in New Orleans in 1905, and resulted in 452 dead.

Gradually, Girod Street Cemetery became superseded, disused, and overgrown. By the 1940s, it was ready to give up the ghost (if only…). A city ordinance forbade further burials there in 1945, although illegal burials continued at night for those unable to afford vaults. Many of the families who owned tombs there simply ignored the decree. Newspaper articles of the early 1950s complain of the "wineheads" sheltering in tombs and vaults broken open by grave robbers. Christ Church closed it down in 1957, deconsecrated the property, and offered space for whites at Hope Mausoleum. Black remains were moved to Providence Memorial Park. Given their multiracial, zygoma-by-mandible existence for more than 130 years, the Jim Crow-era, post-posthumous segregation seems a little ironic, if not actually stupid as hell. The choicer pieces of sculpture on the tombs (cherubs, angels, and various mourning figures) were spirited away by the State Museum, and probably anyone else who wanted a nice piece of garden art.

The land was sold back to the city after the remains of more than 22,000 individuals were removed. If the figure of 30,000+ burials is used, that leaves us somewhere in the neighborhood of 8,000 dead still on the property. Which seems like a lot. We can speculate that a few of these bodies were buried in mass interments, huge jumbles of bone from the great epidemics of the 1800s. And because the crypts are generally above ground, a crumbling tomb can result in a broad scatter of bones. (I can still remember as a first year grad student in 1989, finding a sock--still occupied--on the sidewalk near the corner of Lowerline and Birch.) So not all the body parts would have been moved. But still, 8,000 stiffs? 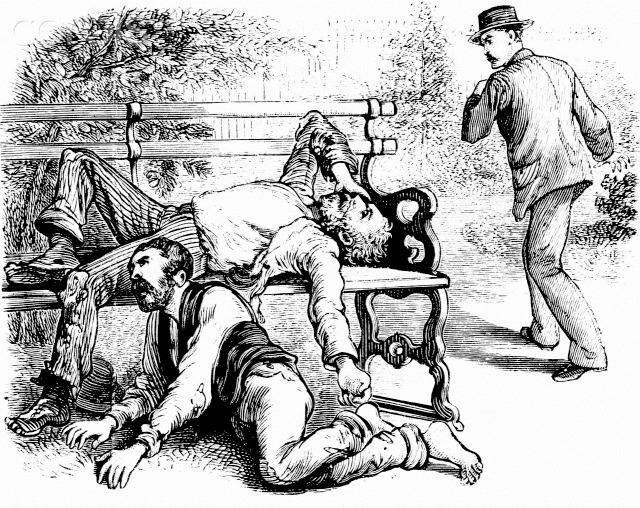 Red Beans and Rice Yellow Fever strikes down two homeless men in New Orleans at around the turn of the twentieth century. Via the Bettman Archive at CorbisImages.com.

Work began on the Superdome in 1971. You can’t dig in New Orleans without hitting something old, so nobody paid attention at first when the brick foundations, buttons, bottles, and other crap (what we archaeologists delude ourselves into calling "artifacts") started coming up. The human bone, on the other hand, did raise a couple of eyebrows, along with the caskets made of tin, wood, and cast iron. However, nobody kicked up much of a fuss, least of all, the residents of the property. After all, the cemetery had been deconsecrated and moved, which made these guys squatters, right? I can find no record of any inventory of bones or coffins found during construction. The only suggestion of their eventual fate comes from Jim McClain, the construction project manager, who told Josh Peter of the Times-Picayune, "everything was just dug up and moved wherever we moved the dirt to." More than three million bricks were salvaged from the tombs and vaults, to be recycled into other city projects. 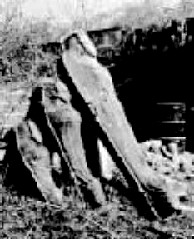 "And when the bears were done with Goldilocks, they found a coffin that was not too big, and not too small..." Girod Street Cemetery during dismantlement, 1957.

In 1987 it was deja-vu all over again. Construction of the Macy’s/New Orleans Centre began just riverside of Lasalle Street, opposite the Dome. Anthropologist Mary Manhein, of the LSU Forensic Anthropology and Computer Enhancement Services (FACES) lab, brought a crew of students out to look at the place at the request of the State Division of Archaeology. While no official report was ever made of her findings, the site form for Girod Street Cemetery (State Site No. 16OR115) records artifacts from the ground surface including buttons, bottles, fragments of marble slab, coffin fragments, and the remains of at least 100 people. From what I understand of the project, the archaeologists were trying to collect as much as possible with bulldozers and backhoes breathing down their necks, and were not able to do any actual digging. Which probably means there are people still lying underneath the concrete here.

Among the strange things I do for fun (apart from the ones I do with Ken dolls and Jello pudding) are map overlays. By fitting old maps over modern ones you can see where buildings once stood and people used to live (or in this case, not). A lot of people have tried this little exercise in the past with the Cimetiére des Hérétiques. It’s easy enough with accurate historic maps, like the Sanborn Insurance Co. maps of 1885 to 1940. These show that the burial grounds were bounded to the north by city property (first a city jail until about 1902, followed by an animal hospital and stables for the city’s mules and kennels for the bloodhounds). Just beyond that, the northernmost (lakeside) quarter of the tract was occupied by the Samuel J. Peters School (1897-1911), which was later moved to South Broad and renamed the Israel Meyer Augustine Middle School. (School colors at Samuel J. Peters? Black and gold, of course. You can’t make this stuff up.) The old school (later a hospital for Illinois Central Railroad employees) lies somewhere near the Girod Street endzone, probably between Sections 119 and 127. 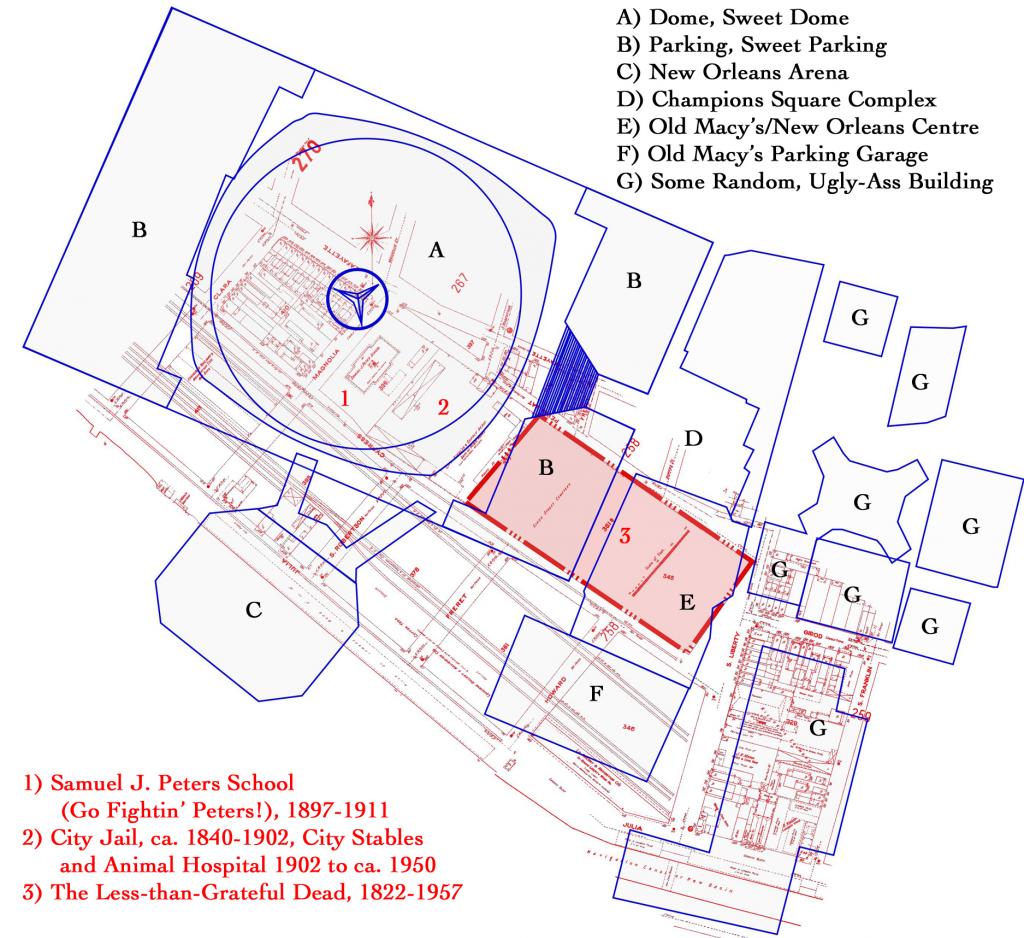 Girod Street Cemetery itself occupied only about half of the tract, lying between the modern Dome itself and Liberty Street. The northern limit of the graveyard lies under Parking Garage 2, and the cemetery runs southeast toward the river under Club XLIV/Encore at the south side of Champions Square (the old Macy’s/New Orleans Centre). In other words, the Saints have never technically played football over the dead. Although they may have parked or purchased a dress shirt on them. 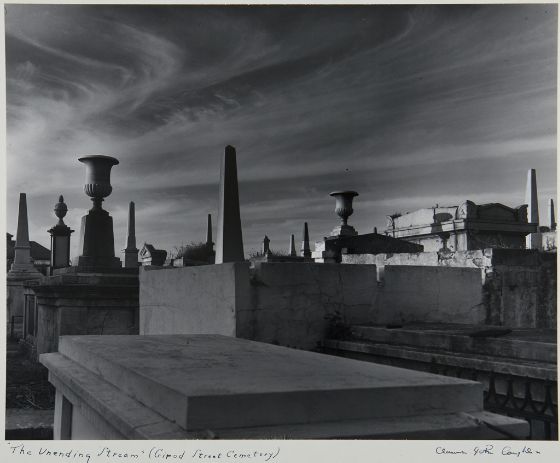 So were we cursed? Let me just preface this by saying I’m not a witch doctor, as far as any of you know. But after 2005,[1] everything seems to have changed for the Saints. The spirits seem to be wearing black and gold these days, at least in the Dome (probably in honor of Samuel J. Peters). If we lose on the road, well, that's on someone else's dead people. I would add that the odds are always against you on the road. Evidence suggests the curse was always in our collective minds, and mostly due to the fact that we just sucked out loud in almost every aspect of the game, from owner on down, until roughly 1986, and for the next two decades just sucked in most aspects. Even during the Great Suckage of 1967 to 1985, we still won more games at home (50) than on the road (33). Today, the Girod Street Cemetery may exist in little more than urban legend, but the dead are still there, waiting for the day the final trumpet shall sound so they can stand up and get crunk. And if they were still ticked off in 1999, there’s no real reason for them not to be ticked off in 2014, especially if they had to pay $20 for a beer and a hot dog. Frankly, if the dead didn’t rise out of the ground to wreak their vengeance on us all on September 25--the day One Direction played in Champions Square--then I think we’re probably okay.

Sources (Others linked in text):

2012 Uncovering the Truth about Above Ground Burial in New Orleans Cemeteries. Article in Examiner.com. .

[1] The events of 2005 don’t deserve to be treated in the irreverent, often a-hole-ish fashion in which I approach all other topics when I write, so I have not touched on them in this piece. Probably for the best, all in all.