Saints vs. Falcons: Scouting the Enemy

The biggest game of the year is upon us, as the Saints host the Falcons Sunday in a game with incredible division and playoff implications. To get the Falcons fan perspective and to learn a little more about the current state of their team, I caught up with our dearest and oldest friend, Dave Choate, from SB Nation's The Falcoholic to ask him some important questions about this crucial late-season matchup.

Share All sharing options for: Saints vs. Falcons: Scouting the Enemy

Cariello:  I'll bet you had high hopes for the 2014 season following that exciting overtime win over the Saints in Week 1 didn't you? Where did it all go wrong?

Choate: It would probably be quicker to list where it didn't go wrong. Injuries knocked out Sean Weatherspoon and Sam Baker early, leaving the Falcons with exactly zero above average starting linebackers and already down one tackle. They lost two centers and their starting right tackle throughout the season, leading to flux in the line they've only recently resolved. Add in some boneheaded Matt Ryan throws, a hot and cold ground game, the absence of Tony Gonzalez, a defense that has been largely terrible and Mike Smith's clock management late in games and it's little wonder things haven't gone swimmingly since we played you guys.

What a garbage year for the NFC South, eh? 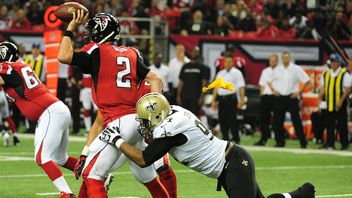 Take a trip down memory lane and read what Dave and Dave said about the Saints vs. Falcons Week 1 matchup before the season even started.

Cariello: Whoever wins the NFC South will have a major uphill climb in the playoffs and won't get as great a draft pick as the other. Do you really, in your heart of hearts, actually want the Falcons to win the division? Or would you rather just forget this year didn't happen and start fresh next season?

Choate: I actually do want them to win. I want them to show that there's enough on this roster to put a strong finish in the books and perhaps win a playoff game. I know that takes the Falcons out of the running for a top ten pick, but this ain't the NBA. The best teams in the NFL regularly draft in the back half of the first round and stay there.

The way I look at it, the Falcons need to attract a big name coach to this job and sell the fanbase on a return to relevance in 2015. The best way to do that is to put something quality on tape over the final weeks of the season and affirm that there are building blocks here you won't find in, say, Oakland.

Cariello: If you could pluck one player from the Saints roster, who would it be and why?

Choate: Junior Galette, probably. The Falcons are starved for pass rushers, and while Galette may not be an elite one, he's pretty damn good. That would instantly make him the best option on the roster for the Falcons.

Honorable mention goes to Brandin Cooks, who I loved coming out of college. The Falcons have a dearth of young receiving options, and he'd really give Matt Ryan a versatile weapon in the years ahead.

Cariello: What is going to be the most important matchup in this game?

Choate: Without question, the defense versus Brees. The Falcons are going to put up some points on the Saints' defense, but the outstanding question is if they can win in a shootout. Hurry Brees, force a couple of turnovers and give your offense extra chances and you've got a real shot here. If they can't touch him and they can't pick him, chances are good the Falcons make a mistake or two on the other end that takes them out of the game entirely.

The problem, of course, is that they can barely rush the passer. I'd anticipate the turnovers will have to be caused by aggressive play in the secondary alone.

Cariello: What changes can we expect for the Falcons this off-season considering another disappointing season? And does a potential division championship change any of that?

Choate: Divisional championship changes nothing, I fear. A 7-9 team isn't going to hold on to an embattled coach because he lucked into a playoff spot.

And Smith is embattled. After two straight poor years, a lot of dissatisfaction with snap counts and clock management, plus his chronically weak record against top teams, there's little chance he survives the year. The roster should get somewhat of an overhaul, but a lot of that will depend on what a new coach wants and whether general manager Thomas Dimitroff survives or not. I'd view that as a coin flip.

Ultimately, next year's Falcons team should have a new coach, new starting running back and tight end, and a potentially major overhaul on the defensive side of the ball. It should be an interesting offseason.