Meet the Who Dat Divas

They come from all walks of life and different places. A look at some of the ladies who love the black and gold.

Share All sharing options for: Meet the Who Dat Divas

A few months ago, while delivering posters for an indie film festival in Memphis, I came across a nice lady who worked at Union Avenue Baptist Church.

Realizing that I had on a 2011 SEC Championship Fleece, the lady and I struck up a conversation about LSU football and of course, the Saints.

As I departed the church building, the lady had this to say about women in the Pelican State to me.

"I was taught two things," she said, "Be an LSU girl on Saturday and a Saints girl on Sunday."

In 2011, Chris Rose, formerly of the Times-Picaynue, wrote a piece that saluted the female Saint fan for WVUE-TV. Rose, who is best known for his outstanding book 1 Dead in Attic, which told the story of New Orleans after Hurricane Katrina, had this to say in regards to female Saint fans.

"I have been to many NFL stadiums," Rose wrote, "and in my opinion, there's a higher percentage of women at home Saint games than any other team in the league."

Unlike most teams' female fans, the ladies of the Who Dat Nation are more likely to shoot pool, curse like a sailor at refs, and about as informed about offseason moves and injury reports as any beer-guzzling guy like myself.

More importantly, during the "lost season" that was the 2012 campaign in New Orleans, these ladies for the most part had a huge role in keeping the Who Dat Nation together through what this writer contends as one of the biggest witch hunts in sports history, giving birth to the term "Who Dat Diva."

This is their story.

The Birth of a Movement

"The Who Dat Diva movement," longtime Saints fan Mesha Pool said in a recent phone interview, "began with a group of ladies that met at training camp in Metarie prior to the 2012 season. After camp concluded, we all started talking about our experience in Metarie and someone started the hashtag #whodatdiva."

Pool, who traces her Saints fandom back to the final days of the Archie Manning era in New Orleans, said that as time went on, the hashtag evolved into a movement around the New Orleans area.

"Six months later," she said, "I contacted a New Orleans-area t-shirt business about creating shirts that said "Who Dat Diva". According to the guy I talked to, we needed at least 25 people to get the shirts made. Once word got out about the shirts, we exceeded the number that was required to make the shirts and they popped up all over the city."

According to Pool, the rise of the Who Dat Diva movement in New Orleans has allowed a large number of female Saint fans to act out the word "diva" to the nth degree.

"For the most part," Pool said, "you're not going to see too many Who Dat Divas in jeans and a t-shirt on game days. To them, a Saints game day is their time to show the world that they are in fact Who Dat Divas. They're going to be out in their black and gold and for lack of better terms, rock it."

Given the fact that we talked on the 4th anniversary of the Saints' historic Super Bowl win, Pool reflected on how she viewed the team prior to Sean Payton and Drew Brees.

"I was resigned to the fact that the Saints would never be a consistent playoff contender," she said, "I wasn't ashamed of my team, however, I would get pissed whenever the team wouldn't play hard in the fourth quarter."

"Sean Payton and Drew Brees were the best things to ever happen to the city of New Orleans," Pool said to me during our conversation, "I truly believe whenever Payton calls it a career, he will be deemed a saint." 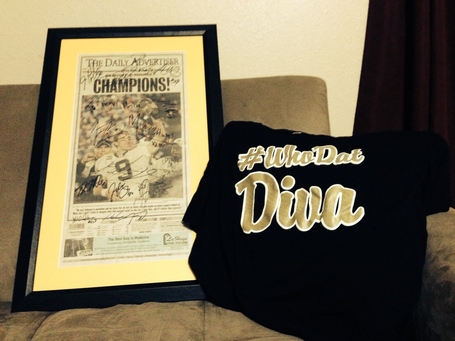 "Being a Who Dat Diva," said Britini Doyle, "means being an example to other female NFL fans. All the Who Dat Honeys and Divas I've come into contact with are not only passionate about their Saints, but also awesome human beings."

Now living in Georgia, Doyle's origin as a Who Dat Diva began from birth.

"I was born in Texas and spent my early years in Pearl River, Louisiana," she recalled, "My momma used to say that when I was little I used to walk around and say 'Who Dat'. So I guess you could say it was ingrained in me."

During the 2012 offseason, while I was writing for Make It Rain Sports, a Mississippi-based sports blog, Doyle's suggestion about creating a 24/7 Saints-oriented network via Twitter became the subject of a satirical column that I would write. Along with that, Doyle was featured on the Saints' Facebook page prior to the 2012 season, an honor that she was definitely proud of.

"I felt honored," she said. 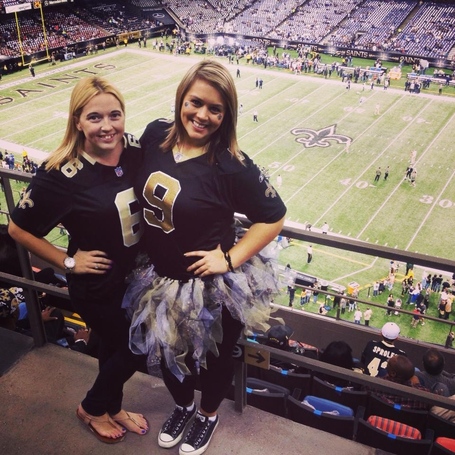 For a nearly a decade, Doyle has been active in raising awareness for childhood, something that she began doing as an eighth-grader.

"I made a resolution to become more involved in my community," Doyle recalled, "I got involved with one child (Kylie) who had cancer, found other children through her who had cancer and found an absolute passion for it. In June 2005, I lost 2 children whose families I had become close to. Children are so young, so innocent & always glowing with smiles, no matter their circumstances and need someone to fight for them and that's where I come in."

When asked about her favorite moments as a Saints fan, Doyle considered her first Saints game against the hated Atlanta Falcons as her favorite memory.

"To be in that dome and hand the Falcons their first loss of the 2012 was amazing. I remember very well my ears ringing for days on end after that game."

As far as what it meant to be a Saints fan, Doyle had this to say.

"Aside from the football aspect, we Saint fans are not only dedicated to our team, but the city of New Orleans as well. More importantly, we're like a family."

For four decades, Sharri Jinnah has bled black and gold, dating back to the team's final season in Tulane Stadium in 1974.

"The first memory I have of the Saints," Jinnah recalled, "was Archie Manning behind center for the team. Unlike now with Drew, we're weren't winning a lot of games back then. But it was fun."

Jinnah, who currently lives in Virginia, recalled the night the Saints brought home the Lombardi Trophy and what the scene was like in New Orleans.

"I was in the city that night," she remembered, "To be in New Orleans and watch our boys capture the Lombardi Trophy was one of the best moments of my life. I can remember high fiving strangers and traffic stopping all over the place. We were forever changed that day as a city." 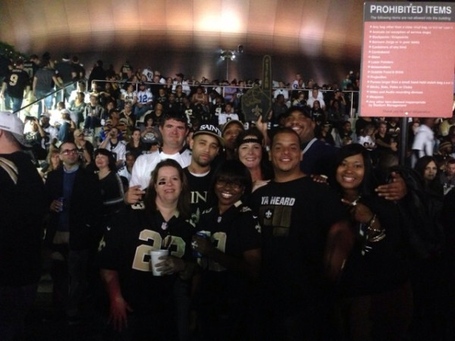 Photo from Who Dat tweetup on November 10, 2013. Jinnah is the one with black headband.

Much like Doyle, Jinnah believes that there is more to being a Saints fan besides football.

"I love football and of course, the Saints. But being a Saints fan goes beyond football, it's about loyalty, passion, and most of all, family. Recently many of us have coined the term 'Who Dat Family' because that's what its all about, family."

When Jinnah was asked about the impact of the Who Dat Divas, she had this to say.