The 2014 NFL draft will be upon us before we know it. The Saints have several needs they could fill, but the most crucial pick will be their first selection at 27th. Who should they take? Our first Saints Draft Face Off pits Dee Ford against Kelvin Benjamin. Judges, the floor is yours.

Share All sharing options for: Saints 2014 NFL Draft Face Off: Ford vs. Benjamin

With the 2014 National Football League Combine now in the books, team scouts, coaches and general managers are starting to get a slightly clearer picture about the positioning of draft-eligible players on their board.

The evaluation process is far from being complete however; college teams will soon start having their respective Pro Days, which are basically the equivalent of the NFL combine, only taking place on various campuses. Following that, teams will begin to hold private workouts for players they are interested in and before we know it, it'll be May 8th and the beginning of the 2014 NFL draft.

Having a successful season is a good thing; being good without winning the Superbowl however, is somewhat of a curse as far as the draft is concerned. This is the position in which the New Orleans Saints find themselves: after winning 11 games in the regular season and one playoff game, the Saints were eliminated in the divisional round by the eventual Superbowl champions Seattle Seahawks; hence they'll be picking low in the draft, at 27th.

Barring an upward move in the draft via trade, New Orleans will be picking at the bottom of each round. The first Saints pick however, the 27th, is the money pick. It's the player that is expected to be a "can't miss" selection, one that should pay dividend, preferably from year one.

The game is simple: if both of the players described in the face-off were available when the Saints pick, who do you think they should select and why? Here we go! 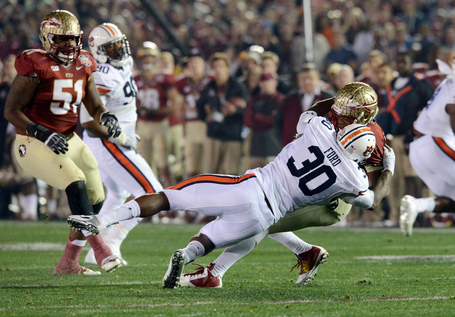 Cons: The biggest knock on Ford regards his size. At 6'2" and 252 lbs, Ford projects as an undersized pass rushing linebacker at the next level. Due to his smaller frame, he has shown a weakness playing the run against the mammoth offensive linemen he faced in the SEC; the issue is here is that the offensive linemen he'll face in the NFL are bigger, stronger and much more experienced than the ones he played against in the SEC.

Why the Saints could use him: An NFL team can never have enough good pass rushers. In the 2013 regular season, Cam Jordan (12.5) and Junior Galette (12.0) were respectively first and second on the team in sacks. The third on the team's sack list was Akiem Hicks with only 4.5 quarterback takedowns. Ford could help shoulder some of the load and make the Saints defensive line even scarier. 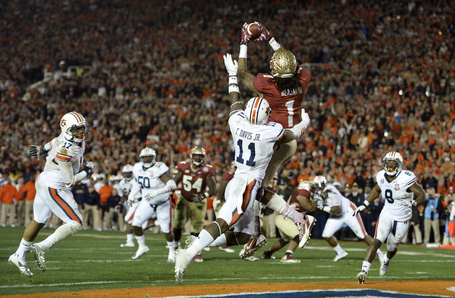 Pros: At 6'5" and 240 lbs., Benjamin is the prototypical big-size wide receiver NFL teams covet. During the 2013 Championship season of the Florida State Seminoles, he caught 54 passes for 1011 yards and 15 touchdowns. Benjamin showed durability and consistency last season, recording a catch in all of FSU 14 games, including the winning touchdown grab in the BCS National Championship against Dee Ford's Auburn Tigers. He has big hands and catches the ball away from his body.

Cons: At times, Benjamin has been criticized for dropping at lot of passes, seemingly losing focus during games. Although he was FSU's number one receiver playing against weak competition in the ACC, he had four games with only 2 catches, including a season-low 2 receptions for 23 yards against mediocre Wake Forest. He is not a burner and will rarely get great separation from defensive backs.

Why the Saints could use him: The demise of Marques Colston has been greatly exaggerated. The Saints wide receiver was second on the team with 75 receptions for 943 yards. Had he recorded only 57 additional receiving yards, Colston would have had his fifth 1000-yard season in a row, which is quite a feat. However, the end of the road is steadily approaching for the 30-year old wideout. Benjamin could learn the ropes from Colston and bolster a receiving corps that too often relied on tight end Jimmy Graham last year and usually folded when Graham was muzzled by opposing defenses. Eventually, he would logically take the role of number one wide receiver for the Saints.

Saints fans, vote and sound off! Who should the Saints pick?