Where Were You: Super Bowl XLIV

Four years ago today, the Saints won Super Bowl XLIV, bringing New Orleans its first Lombardi trophy. Where were you on that historic day?

Share All sharing options for: Where Were You: Super Bowl XLIV

I long felt that if the Saints ever made the Super Bowl, I wouldn't be able to watch the game around a group of people, I'd be far too anxious and focused. Well, that description was more accurate for the 2010 NFC Championship Game, in my case (we'll get to that one in another "Where were you?"). Something unexpected happened though, after winning the NFC title, I felt pretty relaxed going into Super Bowl XLIV and wanted to get together with friends to enjoy the game, as my wife and I had done for the four prior Super Bowls.

I just couldn't go visit family to watch the game though. If I had to deal with folks saying "Why'd Brees throw that pass" or "Oh well, we're gonna lose now" throughout the first half, anger and anxiety would've absolutely come flooding through. So, we visited friends and had wings, chips, dip, just like past years, and while it was the same for everyone else, I just soaked it all in. Were there butterflies? Sure, of course there were, but absent was the all-consuming pressure to win like there was two weeks earlier against Minnesota. I was loving every moment of the Saints finally being a part of this, and it all became real that day.

The Saints' early nerves, the touchdown against Usama Young, the Colts' goal line stand, were all disappointing, but despite all that, they were still in it, and not being embarrassed (looking at you, Denver). I'll admit, at the time, I thought "Ambush" was a foolish and desperate move. Yeah, it went down as gutsy and heroic, but I didn't like it until they came out with the ball. Pierre's leap, Hartley's clutchness, Shockey/Moore's 8-points, the entire second half was arguably Saints football at its finest and most productive. Post-"Ambush", the Saints played with a confidence that I'm sure each and every one of us felt ourselves.

The Tracy Porter interception, I'm not entirely sure there are adequate words to convey the moment. My oldest daughter was just 4 months old at the time, and at that moment I scared the hell out of her, poor kid. It was a simultaneous leap and "YES!!!!", I'd be hard-pressed to recall any singular moment of absolute unbridled joy in my life. I'm in Los Angeles and I haven't seen my old man, in New Orleans, in quite some time, but we got each other on the phone as the Saints lined up for the extra point. It was one of those kind of moments, and one I'll never forget for as long as I live. I heard from my Mom and sister, locally, and received congratulatory texts from friends as the final three minutes unfolded. Everyone knew that moment meant Ballgame.

I was about as happy as I'd ever been, but didn't really get emotional like I always imagined I might. It wasn't until Len Dawson walked out with the Lombardi Trophy that I felt the tears falling down the sides of my face. I welled up and didn't give a damn who was there or what anyone thought. That was the moment, that was a culmination of 23 years of being a Saints fan and grabbing the brass ring you've always dreamt of, and possibly believed was permanently out of reach. That day was, without question, the most fulfilling as a member of the Who Dat Nation.

The images will live on forever, Coach being lifted in the air during his Gatorade shower, Drew Brees holding Baylen under the confetti, Tom Benson yelling "we back!" like a crazy, happy old fool, and Sean Payton thrusting the Lombardi trophy in the air with so much force and passion that he nearly threw it across the field and into the crowd. This image really sums up the moment for me: 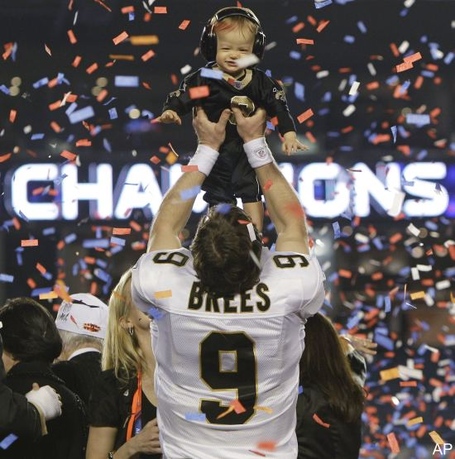 Don't worry folks, most of the posts in this series won't be as wordy as this. Now it's time to hear from you! Tell us your stories, impressions, and memories from the Saints' first Super Bowl victory (the first of many, we hope), Where were you, Who Dat Nation?