New Orleans was left out of the mix when the NFL was doling out compensatory draft picks this week.

Share All sharing options for: New Orleans Saints awarded no Compensatory Picks for the 2014 NFL Draft

The Pittsburgh Steelers -- who lost Keenan Lewis to the Saints, Rashard Mendenhall to the Cardinals, and Mike Wallace to the Dolphins -- were awarded three compensatory picks. The Atlanta Falcons were the only team in the NFC South to garner any compensatory picks, and they also earned three.  So did the Houston Texans, Dallas Cowboys and St. Louis Rams.

The Baltimore Ravens pulled in the maximum of four, and retain their league-wide lead on compensatory picks since the team's inception.  The New York Jets were the only other team to grab four extra picks in this year's draft.

The full list of compensatory picks is available below: 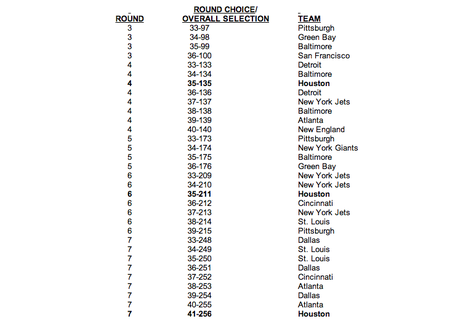 Compensatory picks are not eligible to be traded, which means the Houston Texans will be making the final pick (traditionally dubbed "Mr. Irrelevant") in the 2014 NFL Draft.