It's the return of the 2014 NFL Draft Face Off. Today's matchup: cornerback Jason Verrett from TCU against wide receiver Odell Beckham Jr. from LSU. If you were the Saints General Manager, who would you pick and why?

Share All sharing options for: Saints 2014 NFL Draft Face Off: Verrett vs. Beckham.

Until the 2014 NFL draft which starts May 8th, we are going to have some fun with potential first round picks for the New Orleans Saints.

The game is simple: we pit one defensive player against one offensive player. If both of the players described in the face-off were available at 27th when the Saints pick, who do you think they should select and why? 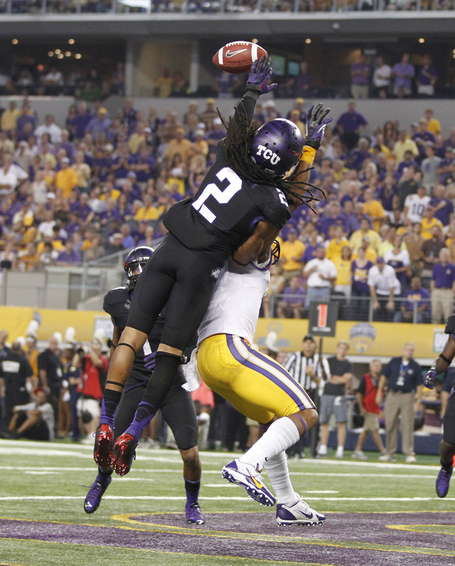 Pros: Verrett (5'9", 189 lbs.) is a very interesting prospect. Despite his smaller stature, he has missed only one game in the last three years, showing his durability. He had an outstanding junior season in 2012 at TCU, tallying six interceptions, 16 passes broken up, 63 total tackles, including 46 solo. Last year as a senior, he was often avoided by opposing quarterbacks yet still recorded two interceptions, 14 passes defended and 39 total tackles (31 solo). What he lacks in size, Verrett makes up in speed: he ran an impressive 4.38 40-yard dash at this year's NFL Scouting Combine, tied for second fastest among defensive backs.

Cons: With the NFL trending in the direction of bigger wide receivers and tight ends, Verrett's small size could be an issue when guarding most number one receivers on NFL teams. This confines him to being mostly a number two or even a nickel cornerback; with that in mind, spending a first round pick on him could be seen as somewhat of a reach. Verrett has a torn labrum and will have shoulder surgery following TCU's Pro Day workouts on March 21. Teams could be scared away from him with the uncertainty about his recovery.

Why the Saints could use him: As a team, the Saints had only 12 interceptions last year, which ranked 24th in the NFL. Cornerback Keenan Lewis recorded four of them but no other cornerback on the team had more than one. With former starting cornerback Jabari Greer having been released and backup Patrick Robinson coming off a torn ACL, the only known and healthy commodity to start opposite Lewis next year is third-year player Corey White. New Orleans could undoubtedly use a cornerback with the instincts and ball skills of Jason Verrett to compete with White for the number two cornerback spot. 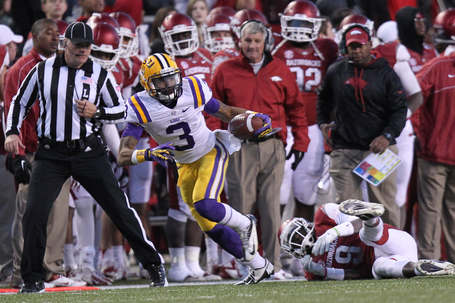 Pros: At 5'11" and 198 lbs., Beckham isn't exactly the big wide receiver that Saints fans have been clamoring for since the end of the 2013 season. However, the former LSU Tigers offers much more than mere receiving skills. In 2013, Beckham did about everything for LSU. He had 59 receptions for 1152 yards and eight touchdowns. To those numbers he added 18 punt returns for 160 yards, 32 kickoff returns for 845 yards and five rushes for 58 yards. That amounted for an outstanding 2215 yards, which broke LSU's single season all-purpose yards record.

Cons: Although he played in every game during his three year career at LSU, Beckham was often dinged and sat out parts of several games. In 2013, he tailed off late, not recording a single touchdown in the last four games, with a season-low one reception for 16 yards against Arkansas in LSU's regular season finale. His route-running abilities have been questioned at times, especially when compared to that of his receiving mate at LSU, Jarvis Landry. He has shown a tendency to get outmuscled by defensive back for contested balls.

Why the Saints could use him: The detractors of an Odell Beckham pick for the Saints might mention the fact that New Orleans already has a receiver in the same mold in Kenny Stills (6'0", 194 lbs.). Stills had a very good rookie season for New Orleans (32 receptions, 641 yards and 5 touchdowns), while being thrust into a deep threat role because of Joe Morgan's training camp injury. However, on top of sharing the wide receiving duties and adding to the youth movement in the Saints receiving corps, Beckham could strengthen a very average kickoff-return game than ranked 17th in the NFL in yards per return (23.0) and a punt-return unit that ranked even lower at 30th (6.1 yards per return).