It's hard out here for a football fan. We're so thirsty for real news that schedule releases warrant one-hour specials. It's like a less meaningful, sadder "The Decision" (if that's possible). But, they're out, and the Saints at least know the where and when. Here are some first impressions.

Football is back!  Well, not really.  But we know what's going to happen when football is back!  After a solid month of teasing and "leaks," the NFL has released the schedules of all 32 teams.  And, as per usual, every fan of every team thinks that they got hosed.  The Saints will be seeing the good, the bad, and the ugly in 2014.  They have their own nightmarish NFC South to deal with, but there aren't any freebies outside of the division either.

By now, most readers know the opponents New Orleans is slated to face next season.  The really interesting part of this schedule is the structure of it.  For starters, for the second year in a row the Saints open the season against their most hated rival by far: The Atlanta Falcons.  However, this game is being played in Atlanta rather than in the confines of the Dome.  Expect a rabid atmosphere not dissimilar to what was displayed last year in the Superdome, only cut the noise in half.  After all, they aren't us.

The Saints and their revamped secondary will get the chance to prove themselves early and often next year against two good receiving corps with two different styles.  They go from Atlanta, who rely on big-bodied and physical guys like Roddy White and Julio Jones, to Cleveland, who of course have the speedster Josh Gordon and added Andrew Hawkins from Cincinnati in the offseason to complement him.  Suffice it to say that Keenan Lewis and the new-look Saints secondary will be busy next year.  Rob Ryan will continue to scheme until he can't scheme no more, but they'll have to be excellent once again to ensure success for the Saints and give them the hot start that is so important in the NFL. 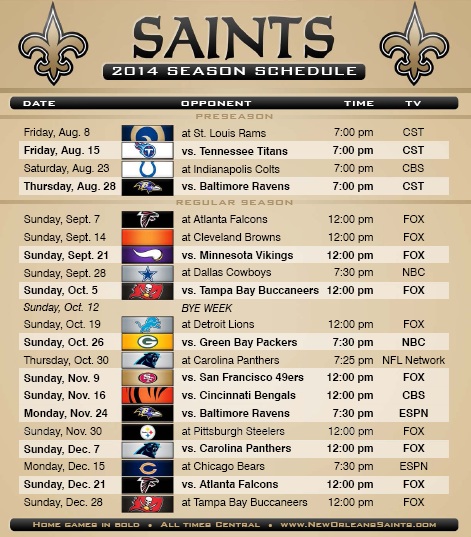 Behold the full Saints 2014 schedule in all it's wonderful glory!

And then there's Minnesota.  Thank god this game is in New Orleans, because something awful would happen if the Saints were forced to visit.  Their fans hate us for 2009, and they want revenge.  Some grudges never die.  It's hard to blame the Minnesotans, but it does get a bit tiresome rehashing a game that took place five years ago and counting over and over again.

New Orleans has the maximum five primetime games next season, and only two of them are in the Dome.  They have Dallas in Week 4, Green Bay in Week 8, Carolina in Week 9, Baltimore in Week 12 and Chicago in Week 15.  Green Bay and Baltimore are the only two in New Orleans.  Weeks 8 and 9 are a total mess because they have what is presumably going to be an air raid against Green Bay on Sunday Night, then they must travel to Carolina to play the still nightmarish Carolina defense on Thursday Night.  Thursday Night games tend to be less than enjoyable barring a bent goal-post or two courtesy of Jimmy Graham, as many Saints fans will recall, and the Carolina game will be downright stingy if past games are any indication.

The Saints experience another early bye in 2014 as well, unfortunately.  In Week 6, they take the week off to prepare for Detroit.  After Detroit, it's Week 8, AKA the aforementioned most completely bonkers two weeks of the season.  The only real solace in the back half of the schedule is the fact that after Carolina, five of the last eight games are at home.  During the final stretch, three of the last four games are against divisional foes.  In Weeks 14 & 16, the Saints host Carolina and Atlanta, respectively, before closing out the season in Tampa Bay.  This trend is nothing new for the league, as they want to ensure that back half games matter, so Saints fans should expect a very stressful four weeks throughout that final quarter of the year.  However, championships are won in the fourth quarter, so why should the season be any different?

The problem with those back half road games, however, is that one is in Pittsburgh on November 30 and the other is in Chicago on December 15.  What does that mean?  It's going to be cold as hell and the players are going to hate it.  Of course the narrative that swirled around New Orleans last year was that the Saints "struggled in the cold," when in reality they suffered the same shortcomings any team will.  Hits hurt more, it's harder to grip the ball, these are standard issues exacerbated by the fact that the Saints just don't deal with those conditions as often as teams that play in them regularly.  Pittsburgh and Chicago are going to be very cold, dark, difficult games.  The only quality of the schedule that redeems those games is that San Francisco is coming back to New Orleans for a rematch of last year's thriller, and Cincinnati must also travel to the Dome and leave Paul Brown Stadium (where they were very quietly 8-0 last season).

Whenever new information is released, it can be very difficult to process.  The Saints are looking at a tough road in 2014, but it's the NFL.  There are no easy roads.  The division (and the conference) are going to be highly competitive next year, but at the end of the day the best team overcomes difficult schedules, strange times and every other extraneous factor to come out on top.  The Saints still have the draft and the post-draft free agency bustle to shore up any shortcomings preventing them from being the best.  New schedules can bring a lot of doom and gloom to a fanbase, especially one as loyal as the Saints, but they should also bring hope.  The Saints can beat all 16 teams on that schedule.  That's why the games are played, and that's what makes this team so much fun to watch.  There may not be any freebies, but no one is going to write us off either.