The Saints now have a huge hole at the center position and free agent Jonathan Goodwin looks like the best person to fill it.

Nearly two months ago, well before the start of the 2014 NFL free agency period, I speculated that the Saints could very well bring back former center Jonathan Goodwin if the team let Brian de la Puente walk away and sign somewhere else.

Well, de la Puente has signed somewhere else. So it's time to get Goody, got it?

Could the Saints Re-sign Jonathan Goodwin? 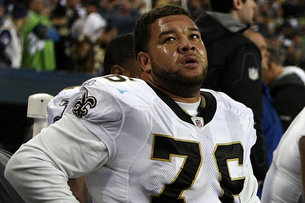 Center has now become a serious concern of mine. It's the numero uno position of need for the Saints. Tim Lelito could potentially slide over from the guard spot but I'm not crazy about that idea. Not in the short term at least. The Saints just need someone to get them through this season, while they can groom someone else for the future. Or at least until next free agency when they can sign another veteran replacement.

Goodwin has still not been signed by anyone in free agency after the 49ers let him walk. As I said months ago, at 35-years old he is certainly no spring chicken but the simple fact that he's got a history with Drew Brees and the Saints makes him an attractive backup option. And he shouldn't cost too much, which is another plus for the cash-strapped Saints.

So get it done, Loomis. You haven't let me down yet this off-season.