"Stanley Jean-Baptiste" sounds like the name of a trumpet player from the Rebirth Brass Band. Instead, he's a cornerback that the New Orleans Saints selected in the second round of the NFL draft out of Nebraska. His game film breakdown shows why they couldn't pass him up.

After trading up to select wide receiver Brandin Cooks with the 20th pick in the first round of the 2014 National Football League Draft on Thursday night, the New Orleans Saints got another player they highly coveted in cornerback Stanley Jean-Baptiste. New Orleans, who even considered trading down had Jean-Baptiste not been available, picked the former Nebraska Husker at the 26th position (58th overall) in the second round of the draft and in him they're getting a player that will fill a need of the team to perfection.

With NFL defensive backs increasingly having to defend against taller wide receivers and tight ends, big cornerbacks have never been more in vogue than they are now. But size isn't all that Jean-Baptiste brings to the table: the 6'3", 218 lbs. rookie comes with an arsenal that includes rare athleticism and football instincts to spare.

Everything you need to know about the newest member of Who Dat Nation.

Jean-Baptiste is far from perfect however, as are most first-year players. There are flaws in his game that he'll need to erase in order to consistently see the field in New Orleans where he'll be competing with no less than three veteran cornerbacks (Champ Bailey, Corey White and Patrick Robinson) for a starting job.

As raw as he sometimes looks, when watching his game film, it is fairly easy to see why the Saints fell in love with Jean-Baptiste's abilities and maybe more importantly, his enormous potential. Let's take a look at the tape and judge for ourselves.

In 2013, Jean-Baptiste had 41 total tackles (27 solo), 12 passes defended and four interceptions. His willingness to get his hands dirty is apparent on film, although at times he appears to shy away from contact.

On this next play in a game against Illinois last year, he shows the ability to shed the block of a wide receiver and help against the run. Pre-snap, Jean-Baptiste (#16, red circle) is lined up in press coverage. 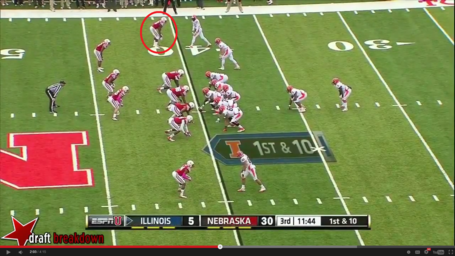 Post-snap, the Illini quarterback hands the ball to his running back (blue arrow) and the wide receiver immediately engages the Huskers cornerback (red circle). 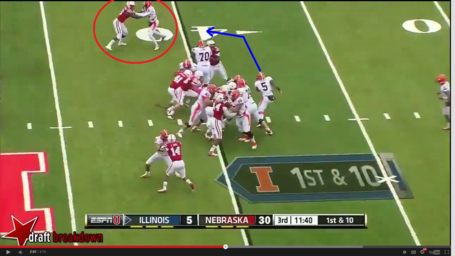 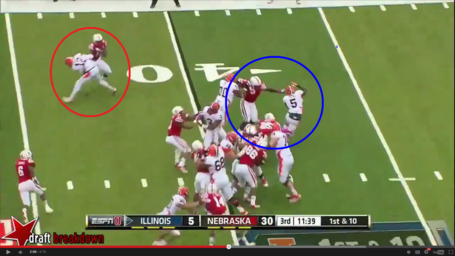 Jean-Baptiste darts towards Young and assists Ankrah with the tackle for a loss on the play. 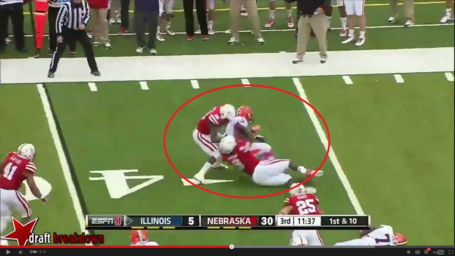 Here a GIF of the play, as a wise man once said: "a GIF is worth a thousand stills."

Needs to get tougher

One of the criticisms Jean-Baptiste has received during his draft evaluation is the fact that at times, he doesn't play with the toughness expected from a player of his size. The next sequence in this game against Michigan illustrates that point with flying colors.

Pre-snap, Jean-Baptiste (#16, white square) plays off his receiver, as Michigan initiates a sweep handoff to the slot receiver (blue arrow) coming from the offensive right side. Michigan's play is designed for wide receiver Joe Reynolds (#85, red arrow) to block the linebacker, while fullback Joe Kerridge (#36, pink arrow) will block Jean-Baptiste and open an alley for the ball carrier. 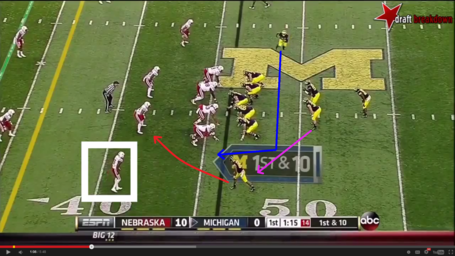 Jean-Baptiste (red circle) diagnoses the play and starts forward as the fullback (dashed pink arrow) bears down on him. Meanwhile Reynolds (#85) pins the Huskers linebacker inside, allowing the runner to cut inside (blue arrow). 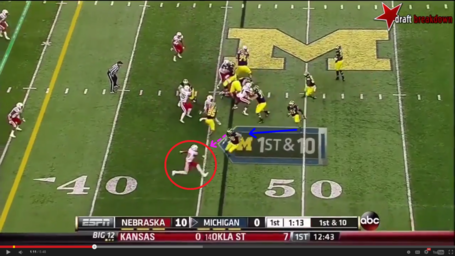 Jean-Baptiste gets blocked with shocking ease by Kerridge (red circle) who carries him all the way to the sidelines, opening up a huge lane for the wide receiver (blue arrow), resulting in a gain of nearly ten yards. 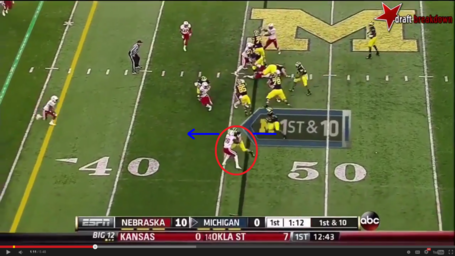 The GIF of the sequence helps appreciate the beautiful play-design by Michigan, but more importantly, Jean-Baptiste's rather weak effort to get rid of the blocking fullback.

Stanley Jean-Baptiste is a converted wide receiver, therefore catching the ball is something he is intimately familiar with. For Saints fans who have grown accustomed to defensive backs with "stone hands," this will be a most welcome change.

In the play below against Michigan, one could have sworn that Jean-Baptiste was the intended target of the Wolverines quarterback. Not only does he make a great catch, he snatches the ball at its highest point, away from his body (and a potential swat from the defender), then cradles it against his chest as he falls to complete the interception. Pure beauty!

Have instincts, will get burned.

Any good defensive back is a bit of a gambler: peeking in the backfield to read the quarterback's eyes, jumping the receiver's route to get an interception. Having the ability to trust his instincts as to when to take a chance and when to play it safe is something Jean-Baptiste will have to quickly learn in the NFL. His aggressive nature and tendencies to go for the ball got him interceptions, but also got the best of him at times in college.

In this next GIF, with a perfectly executed double move, former Penn State wide receiver (now with the Jacksonville Jaguars) Allen Robinson schools Jean-Baptiste by turning his strength into a weakness. The Huskers cornerback is only bailed out by an overthrow from the Nittany Lions quarterback.

He looks plenty fast to me!

In the age we live in, where every single aspect of a draft prospect is dissected, even the slightest flaw will get exposed. Jean-Baptiste's top-end speed had been questioned, after he ran a 4.61 40-yard dash at the 2014 NFL combine. However, in a familiar environment at Nebraska's pro-day, he improved that mark to a very good 4.45.

That result, along with plays like the one below should help quell the fears of Saints fans with regards to Jean-Baptiste's speed. After picking the ball off at the goal line, he not only shows more than adequate speed in returning it nearly 40 yards, he also displays an elusiveness that could have him be considered for kick-off return duties in New Orleans.

All in all, the New Orleans Saints and the Who Dat Nation should be very happy with the team's selection of Stanley Jean-Baptiste in the second round of the 2014 NFL draft. If he develops quickly and lives up to his potential, Jean-Baptiste could become a full-time starter with the Saints before the end of the 2014 season. Along with Kenny Vaccaro, Rafael Bush and Keenan Lewis, New Orleans would possess one of the most intriguing and talented starting secondary in the entire NFL; one that would surely give plenty of nightmares to offensive coordinators across the league.

Note: Very special thanks to "El Maestro" Clay Wendler for his help with the GIFs on short notice.