Getting to Know Saints 2nd Round Draft Pick Stanley Jean-Baptiste

We get the lowdown on the Saints newest cornerback from the college bloggers who covered him for years at SB Nation's Corn Nation.

Share All sharing options for: Getting to Know Saints 2nd Round Draft Pick Stanley Jean-Baptiste

I had the opportunity to ask the fine fellas over at SB Nation's Nebraska Cornhuskers blog, Corn Nation, some questions about Saints second round draft pick Stanley Jean-Baptiste. Their writing staff of Jon Johnston, Brian Towle, Andy Ketterson combined to provide some insightful and hilarious answers.

Brian: Well, in my mind, you put SJB on a receiver and you let him lock the guy down. Bo Pelini makes a living off of Cover 2 and letting his DB's pattern match receivers while his DL does the work up front. A few times he'll go zone, but Bo has done well with Secondary folks since he's been in Lincoln. Being a former WR when he arrived at school, he has shown to have a pretty good concept of what offenses like to do.

Andy: I'd agree with above adding only that they should watch who they put him on early. Some experienced receivers could probably make him whiff a few times until his experience catches up to his ability.

So Your Team Drafted Stanley Jean-Baptiste... 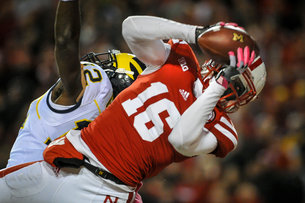 Profile of the Saints newest cornerback from the people that know him best... Cornhuskers fans.

What does SJB need to improve on to have success at the next level?

Brian: Experience and reps. He's only been a Defensive Back 2 years and change, so the fact that he'll be facing Wide Receivers with better skill sets than he faced in the Big Ten means he'll have to get that experience.

Jon: What Brian said. Some pre-draft reports questioned his physicality. I have no idea where they got that, given how college football changed last season with the targeting rule, SJB was perhaps at times a little too physical (got ejected from one game for targeting, but it was a pretty iffy call).

Did SJB contribute on special teams while at Nebraska? In what capacity?

Brian: I could see SJB being a guy who takes on and locks down a gunner outside during Punt Return. Then again, if you saw a Nebraska Punt Return this season, you'd wonder a lot of things about it..

Andy: He didn't play on any special teams the last couple of years that I was aware of but I couldn't agree more with the punt return comment. He could be an absolute monster there.

Does SJB have any significant injury history we should know about?

Brian: Nothing that I can remember off hand. SJB started all 13 games last year, and in ‘12 played in all 14 games in both a starting and backup role.

Andy: No injuries of any kind, not even a nick. SJB was the test subject for an alloy technology pioneered by U of Nebraska's cutting edge Med Center. It is similar to that seen in the movies which allows characters such as Wolverine and vampires to mend broken bones & heal cuts immediately. He will not miss a game due to injury.

What is SJB's reputation off the field?

Brian: I can't remember anything being an issue with him off the field. He has spent time with the Husker Heroes program.

Jon: He earned his degree in in sociology in May. He's been a pretty low key guy.

Andy: When not rescuing cats from trees & reshelving university library books to a more efficient system which he invented, he also plans to spend the weeks before training camp leading an insurgency which will return Crimea to the Ukraine and spit in the face of Putin's lies. He really is a decent fellow.

Any fun, random facts about SJB you can share?

Brian: SJB came to Nebraska from Fort Scott CC in Kansas, where he spent a year tearing it up as a Wide Receiver. In 2012, he started at both WR and DB in the same season. His first game as a DB was against Ohio State in Lincoln.

Jon: In his first game as a DB, he intercepted a pass that set up Nebraska's go-ahead touchdown. The game ended up being Nebraska's greatest comeback victory in school history. Tied for team lead with four interceptions this season, one each in the first four games in 2013, the first time that happened since 2003.