Getting to Know Saints 5th Round Draft Pick Vinnie Sunseri

We get the lowdown on the Saints newest safety from the college blogger who covered him for years at SB Nation's Roll Bama Roll.

Share All sharing options for: Getting to Know Saints 5th Round Draft Pick Vinnie Sunseri

I had the opportunity to ask the fine fellas over at SB Nation's Alabama Crimson Tide,  Roll Bama Roll, some questions about Saints fifth round draft pick Vinnie Sunseri. Plus one question about Mark Ingram because I couldn't resist. Thanks to them for taking time to provide insightful answers.

You guys were surprised when Sunseri announced he would be entering the draft this year since he had a year remaining and was recovering from ACL surgery. Why did he decide to declare or why do you think he did?

Vinnie's decision to leave school early left everyone, including Saban I think, scratching their head a bit. His first year he was special teams standout. In 2012 he saw the field more when the defense went to nickle or dime, but he always seemed to be a liability in pass coverage. (see A&M game in 2012). However, between the 2012 and 2013 seasons, Vinnie dropped some weight and looked like a completely different player. Being a little lighter allowed him to hold up better in pass coverage but he was able to be the run stopper you need in a strong safety. When he went down with the ACL injury everyone assumed he'd return in 2014 for his senior year but as we all know by now, that didn't happen. 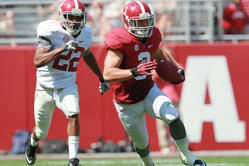 Fans react to the Saints fifth round selection.

My best guess on why he left early is that it may have had a lot to do with Landon Collins (aka playing time). When Vinnie went down, Collins stepped right into his role and the defense barely skipped a beat. We could have moved Collins over to Ha-Ha Clinton-Dix's free safety spot but strong safety is his natural position and Collins will likely be a 1st round pick in 2015. So Vinnie looked at the roster (and his knee) and probably felt his time was now. And the fact y'all picked him in the 5th round proves he was right.

Saints defensive coordinator Rob Ryan loves him some safeties. What do you think Sunseri can contribute to Rob Ryan's defense?I'm not too familiar with Ryan's scheme but Vinnie is probably best suited as a nickle back/ blitzer on passing downs. He can cover TE's well enough but I'm not sure how he'll handle NFL wide receivers. My best guess is he'll be a special teams stand out who may eventually make a name for himself on 3rd down situations.

What will Sunseri need to improve on at the next level?

Pass coverage. Vinnie has everything you need in a tackler and blizter but needs to work on his pass coverage skills. He improved on this dramatically from his sophomore to junior season but is still something he needs to work on if he wants to become an every down safety in the NFL.

What is Sunseri's reputation off the field?From everything I've seen and heard he's a good kid who stays out of trouble. He's a coaches kid, (his dad coached at Bama and is now on staff at FSU) so he knows the game and how to handle himself. One thing you won't have to worry about with Vinnie is off the field issues or drama. Most importantly, he'll work hard and do what is asked of him.

Any fun, random facts about Vinnie Sunseri you can share?

Like I said, he's a quiet guy (at least he's never been in trouble) and I don't know too much about is private life. Sorry.

I think most Bama fans have been frustrated at how the Saints have used Ingram. He's a power back with excellent vision and surprising speed. We understand he's had his fair share of injuries but when healthy a guy like Ingram deserves more than a handful of carries per game. I know the NFL is a passing league now, and running backs aren't expected to carry the ball 20+ times a game, but if the Saints don't plan on giving him more touches, maybe it's best to part ways. Hopefully, we'll finally see a fully healthy Mark Ingram in 2014 and he can prove he's not just another Heisman bust.