Getting to Know Saints 4th Round Draft Pick Khairi Fortt

We get the lowdown on the Saints newest linebacker from the college bloggers who covered him last year at SB Nation's California Golden Blogs.

Share All sharing options for: Getting to Know Saints 4th Round Draft Pick Khairi Fortt

I had the opportunity to ask the fine fellas over at SB Nation's California Golden Bears blog, California Golden Blogs, some questions about Saints fourth round draft pick Khairi Fortt. Their writing staff of Scott Chong, Leland Wong, and boomtho combined to provide some insightful answers. Sincere thanks to all of them for taking the time to share their knowledge.

What does Khairi Fortt do well?Scott Chong: A little hard to say.  He was part of one of the worst defenses in Cal history.  He didn't stand out with regards to instincts or athleticism.  Clearly, the football experts see more in him than we do.boomtho: Fortt is supposed to be a great athlete with mediocre instincts (ability to quickly diagnose and snuff out a play). I don't recall hearing much about him in coverage either way.

Leland Wong: Not be a glaring a failure? Fortt did not particularly stand out, which means he was able to reliably do his job without making huge mistakes for fans to curse. 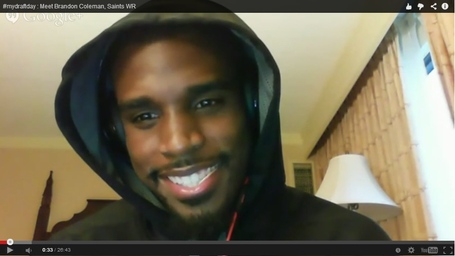 What will Fortt need to improve at the next level?

Scott Chong: Make a difference?  boomtho: First, he'll need to shake off the injury bug. Second, he'll need to improve his understanding of the game and his ability to quickly diagnose plays. If he was a plus athlete in college, he's likely to be average in the NFL, so he'll need to make his name on something else.

Leland Wong: Develop some kind of play-making ability to truly stand out. As is, he can probably have a healthy career as a steady defensive contributor, but not one who stands out as a franchise, must-retain player. Fortt could really help his value with some take-aways as I can't recall him making any interceptions and he neither forced nor recovered any fumbles as a Golden Bear.

In the 2013 season Cal had the worst defense in school history. Obviously this is a team sport, but did any of that have to do with Fortt?Scott Chong: In his defense, we had a defensive coordinator who didn't have much of a clue.  'Can't say whether Fortt was misused, under-utilized, or all of the above.  He doesn't resonate in my memory as a difference-maker.boomtho: I don't think Fortt is one of the top 10 causes for our terrible defense this year. As Scott mentioned, our DC was terrible and we were hit with a nearly incredible rash of defensive injuries (we were down to our 4th or 5th string CB's at some point). I think Fortt was probably a middle of the pack performer for Cal last year - not great, not terrible.

Leland Wong: Fortt bears some responsibility as he was on the field for that nightmare and, as mentioned above, didn't actively take control of the defense as a leader or as a playmaker, but he was not one of the primary weaknesses. He was just a solid, but perhaps unspectacular, player.

Did Fortt contribute on special teams? In what capacity?Scott Chong: No idea.  If he did, he didn't stand out.boomtho: I think he played a little bit but wasn't a 'starter' on any ST units. Which may or may not be good for him - our ST were pretty awful last year as well.

Leland Wong: Fortt did contribute to coverage on special teams, but again, he didn't particularly stand out for either having a tendency to get to the ballcarrier or for missing tackles. He just quietly does his job.

Can you give me some background on his injury history?Scott Chong: Not really.  He split time at OLB w/ a freshman, Michael  Barton.  Could have been due to injury or because Barton was a better player.boomtho: Khairi had knee surgery while at Penn State (before transferring to Cal). At Cal, he suffered a season ending arm injury this year after 9 games. Still, if the Saints' doctors think he's fine, he's probably fine. More details here.

Leland Wong: Fortt himself says the year he spent as a medical redshirt (2012) was for an elective procedure to strengthen and stabilize his knee. Allegedly the doctors would have cleared him for play that year, but he opted to have this surgery to minimize the chance of a serious injury happening and to help him have a healthy and long career. Some fans believe Fortt quit or took time off for minor injuries, but I don't see any evidence to back this up.

What is Fortt's reputation off the field?Scott Chong: Doesn't have one, which is a good thing.  As far as we know, he's a solid guy from a character standpoint.

boomtho: I don't recall him being mentioned among the leaders for the team, but he certainly did not get in any trouble off the field.

Leland Wong: He's given no indication that he'll act out or be a poor representative for your indication. He speaks highly of his family instilling the importance of academics and a back-up plan, so he definitely seems like a smart and responsible young man.