Since being drafted, Brandin Cooks has been dubbed the replacement to the departed Darren Sproles. But, what if Cooks came and actually replaced another player? We study some film and compare it to another famous Saint to see where else Cooks could make an impact.

Since the  trade of Darren Sproles to the Philadelphia Eagles took place we've listened to fans, analysts and writers beat a dead horse that only knew one phrase, "How will the Saints replace Darren Sproles?" May rolls around and after waiting for what seemed like an eternity (and it actually did take longer for the draft to take place than last year due to Easter) and the Saints trade up to select Brandin Cooks.

Now, the story has shifted to include Brandin Cooks. Cooks is now the replacement  of Darren Sproles, at least that is what some in the media are saying. Cooks and Sproles both are X-Factors with skill in space, but are different positions at their cores. Yet, that hasn't stopped some from going as far as to declare Cooks a  running back in their early season depth chart graphics.

Devery Henderson was known for his go/flag/post routes, but he did more than that. Reverses, In/out/slant routes and even the occasional flea flicker thrown in made Henderson a receiver that defined the Payton mold. He was versatile. At first glance Henderson and Cooks aren't too dissimilar. Both are speedsters who ran sub 4.40s and are below average height. Henderson stands at 5'11 and ran a 4.36 at the 2004 NFL Combine. Cooks stands 5'10 (in cleats) and ran a 4.33 at the 2014 NFL Combine.

What I think we can take from the comparison between the two are some of the types of plays we might see Sean Payton implement for the young Cooks based both on what he ran in college and what Coach Payton did for Devery. Remember that word versatile? Short screen plays  and slants aren't all he will have to do to help the Saints win football games. Lets take a look at some film. 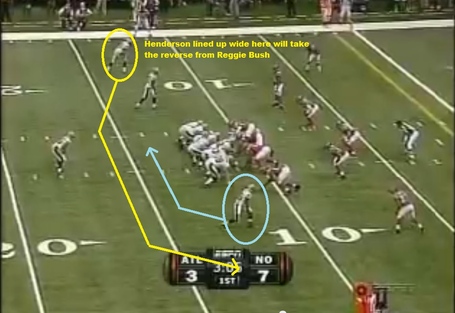 Sorry for the picture quality, but this is from 2006. This is the type of play Sean Payton might try with a player of Cooks' speed and elusiveness. While a bit more elaborate than possibly needed, Coach Payton has always had a flair for the dramatic. I don't expect the lead blocker to necessarily stay the same for any future plays similar to this one.. Next slide *Click*. 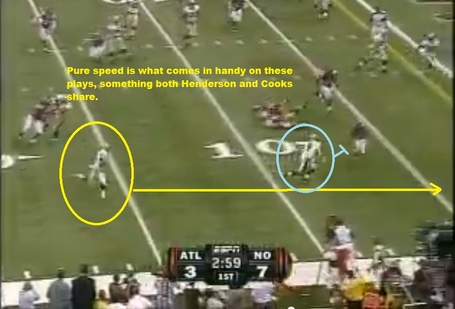 Cooks ran similar styled runs in his time at Oregon St. The following play is a "Fly Sweep". The play displays both Cooks' elusiveness and speed as he receives a handoff and attempts to move the chains.. 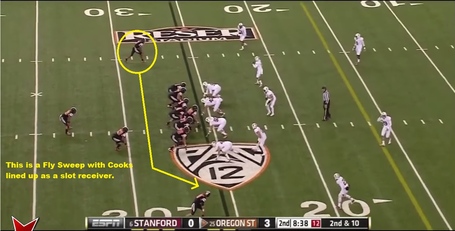 The fly sweep is not a new play, but can still be very effective if called at the right moment. This designed run requires Cooks to beat an unblocked defensive end at the line of scrimmage. If he can use his speed to attain the edge, he should be able to cut up field for successful yardage. There aren't too many defensive ends that come to mind who could sniff this play out and stop it in the backfield. They're certainly limited to one hand. 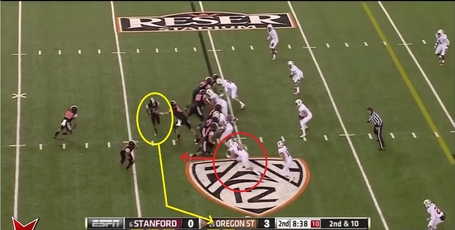 The previous play resulted in a positive gain that brought up a third and short. Now, some have propositioned seeing Cooks spend some actual time in the backfield. This is a possibility, but I find it doubtful. Cooks comes programmed with a full NFL route tree from his days at Oregon St. It is my belief Sean Payton will instead blow dust off some older plays and allow Cooks to inherit those. Coupling these older plays with some of the touches Sproles had, and we begin to form a picture of how Coach Payton might use him.

Another play to consider for Cooks that hasn't been used extensively in the past couple of years by New Orleans is the Flag Route, or the Corner route. Running this route requires the receiver to run up the field, typically 10 to 15 yards, then cut sharply towards the sideline. It is a subtle move to the sideline that opens up a passing lane for the Quarterback. Both Lance Moore and Devery Henderson frequented this route years ago.

Running reverses and sweeps aren't the only former playcalls of Devery Henderson that we can find Cooks using in college. The next route I'm going to show you on film is a simple post route. Devery Henderson is one of my favorite players to ever run this route due to his speed and ability to split the defense. The deep post route requires a player run 20-40 yards down field and cut at a 45* angle towards the goalposts.

Brandin has stated he wants to be more than just a slot receiver. To do this, these are the types of plays we'll have to expect from him. Flanker screens and three yard pitch and catch plays are cute in college, but can turn into negatives in the NFL. If Cooks can implement the full route tree at the NFL level we'll see a game changer on offense. Not only will this open up the field for others, but it will allow his screen plays to be effective as well.He does run every route well like Henderson used to including routes run from the outside receiver positions.

I don't think Cooks is the next Devery Henderson, but I do think that some of the routes Henderson ran (and he ran just about everything on the tree) could give us a small taste of  the possibilities Cooks provides. Screen plays could be deadly for this kid, but the ability to blow the top off or create a big play from a simple 5 yard slant route are what give him the potential to be more than just a slot receiver. I see Kenny Stills and Brandin Cooks both splitting time between the Flanker/Slot positions, but don't be surprised if Coach Payton likes what he sees so much that he slips Cooks in at No. 2 on the outside in a more permanent role.

We as Saints fans received an early Christmas present this year in the draft. We have a talent at the receiver position who, assuming he lives up to his potential, will give us a dynamic playmaker with the versatility at receiver to play almost anywhere on offense. Maybe one day he retires and creates his own BBQ sauce.

Thanks for reading everyone. As Always, I welcome your questions, comments and all around banter. God bless!