We've updated our comprehensive collection of New Orleans Saints mock draft picks one final time before the 2014 NFL Draft this Thursday to find out once and for all who the experts think the Saints will select.

I have updated our collection of 2014 NFL mock drafts from around the web one final time and listed their pick for the Saints with the No. 27 overall selection. Forty different mock drafts now currently make up the database. All have been updated since April 23rd with most having been updated within the past week.

To be honest, not much has changed since last time. Even though we're now just a few days away from the actual draft, nobody still has a damn clue who the Saints are going to draft or even what position.

See how expert opinion about the Saints first round draft pick has changed the past two weeks.

Of the 40 mock drafts, there are still 17 different players at 8 different positions assigned to the Saints with the 27th overall pick. Kyle Fuller and Odell Beckham, Jr. no longer show up in any of the mocks while both Jeremiah Attachou and Louis Nix III make an appearance for the first time.

Most of the mocks still have the Saints picking a defensive player, with the most popular position now being defensive end. Last time it was linebacker, so that's a change. The most mocked player to the Saints is still Auburn's Dee Ford, while cornerback Jason Verrett's stock rose significantly and is a close second.

Here's a visual representation of the database results, followed by the actual database. The database is sortable by any of the headings. Simply click the category heading at the top of each column to sort by that category. 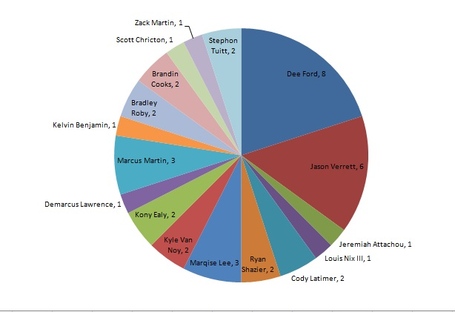