The veteran center returns to the Saints and gives the team much-needed veteran stability on the offensive line.

The New Orleans Saints have agreed to terms with their former center Jonathan Goodwin, according to Mike Triplett. No word on terms of the contract, but I can't imagine it's for any longer than two years.

#Saints and Jonathan Goodwin have agreed to deal, per league source. Terms not disclosed. He should officially sign on Tuesday. 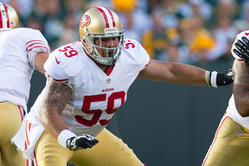 Hey look! The Saints listened to me!

This should come as a surprise to absolutely nobody. Center has been the Saints' biggest position of need this off-season since the departure of Brian de la Puente. The team needs experience at the position and Tim Lelito just isn't ready. I have personally been advocating this move since February, and restated my position again in April.