Corey White the Answer at Nickel?

As OTAs wrap up and training camp draws ever closer we continue to look at the Saints defensive depth chart. Could Corey White see himself locked in at nickel?

Share All sharing options for: Corey White the Answer at Nickel?

Have you ever tried to screw a Phillips screw with a Flathead screw driver? While it can get the job done, it certainly gets on your nerves. A lot of expectations have been placed on the shoulders of Corey White. Previous disappointments in the defensive backfield might have made it a bit tougher for White to find approval, but that still doesn't change (or shouldn't) his on the field play. While I think it is possible for White, a 5th round draft pick, to develop into as a No. 2 type starter corner, I find it more likely that White has already found the place he is best suited.

Everyone remembers the big plays White has given up in the past (such as the DeSean Jackson catch in the playoffs), but there is a lot of good found in White's film when he is playing in the Nickel position. I like White's aggressive play when he is at the line of scrimmage and his assignments usually place him in the short to intermediate route tree.  For example, lets take a look at his play against Carolina last year. This was a tough away game that saw the Saints face not only a tstrong Panther's team, but the elements as well 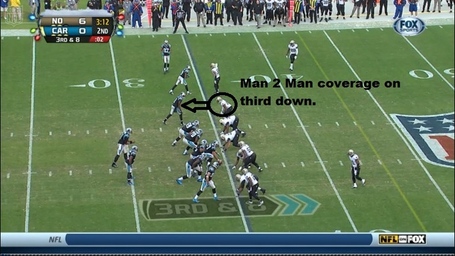 Here we are going to see a sack that was made possible by perfect coverage on the hot route. The Panthers are in Shotgun formation and the Saints are showing multiple pressures. Roman Harper is going to come down from his safety spot on a blitz. Cam Newton will see this and target the area of the field where coverage will be more lax.This is the right route to combat the strong side pressure. If White blows this coverage, not only will it be a first down, but the play will extend farther due to Harper coming down to provide pressure and the defense covering the heavy weak side. 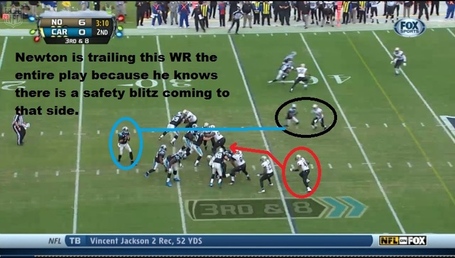 As you can see here, White has his hips line up with the receiver and he is following the quarterback's eyes.The Panthers need 8 yards to complete the play and get a first down. White must keep his receiver moving laterally and in front of him. This requires good hip movement, strength and awareness of both the design of the defensive play and the route of the wide receiver. 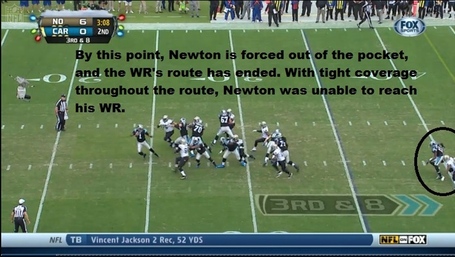 White maintains perfect coverage for 3 seconds. That is all the time that was needed to allow Cam Jordan to record what would be a 17 yard sack. As stated above, if White allows the receiver to get passed him, there is no back up to save the play. Malcolm Jenkins and the other corners are locked on the left side of the field. This is an example of Corey White's strength in the passing game. One play doesn't define a player, but it can show a skillset.

So far during minicamp and OTAs Corey White has spent the majority of his time in the Nickel spot at corner. Going back over his film from last year, it seems that Ryan is opting to play to White's strengths. As it has been said over and over it is too early to say definitely what Rob Ryan's plan is for the defense. With his skill in run support and the short passing game this spot seems the best suit for a young player like White. There is the possibility he could still mold into a future starter as well. Considering some of the higher drafted talent before him I am happier than I could be with his performance thus far. Another "breakout" candidate.

Thanks for reading everyone. As always, I welcome your questions, comments and all around banter. God bless!