The New Orleans Saints didn't win the Super Bowl in 2013 (you knew that). But their 2013 NFL season was still filled with memorable moments, incredible plays, emotional roller coasters. These are the instants we live for as fans of the Black and Gold.

Share All sharing options for: Saints Top Five Moments of the 2013 Season

At the end of every National Football League season, only one team - the Super bowl champion - can legitimately savor the year as a complete success. In 2013, that honor went to the Seattle Seahawks. However, for the other 31 teams, not winning it all doesn't mean the year didn't have its share of great moments.

For New Orleans, the 2013 season left a slightly sour taste of unfinished business. The Saints (11-5) finished second in the NFC South, failing to win their division for the second year in a row, despite having several chances to do so. After winning their first road-playoff game in franchise history in Philadelphia, the Saints lost to the Seattle Seahawks - the eventual champions - for the second time of the season.

In winning 11 games however, there were some outstanding sequences of play for the New Orleans Saints during the 2013 NFL season. Here is, in increasing order of memorability, my top five of these moments for which the Saints 2013 season will be remembered. Tell me what you think, agree, disagree, and don't forget to share yours! 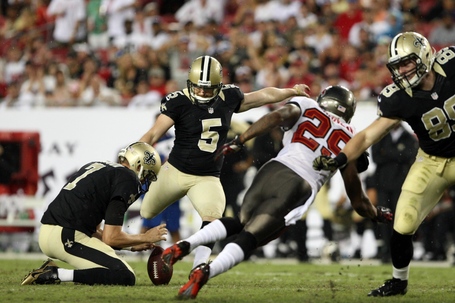 In Week 2 of the 2013 season, the Saints found themselves trailing the lowly Bucs 13-14 with only 1:10 to go in the game and Tampa Bay attempting a 47-yard field goal that would have put them up four and forced the Saints to score a touchdown in order to win. Good fortune smiled on the Saints, as kicker Ryan Lindell missed wide left. Drew Brees and the New Orleans Saints offense took over with 1:06 minutes on the clock and no timeouts. As cool as always, Brees marched the Saints 54 yards down the field, with the key play a 31-yard pass to wide receiver Marques Colston. Kicker Garrett Hartley drilled a 27-yard field goal as time expired, getting the New Orleans Saints to an auspicious 2-0 start to their 2013 NFL campaign.

4. Week 11 - Saints Finally Get the Best of Jim Harbaugh. 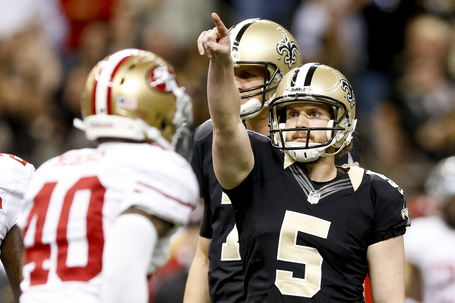 A painful road loss in the divisional round of the playoffs in 2011 followed by a stinging home loss during the Sean Payton-less 2012 season meant that New Orleans was 0-2 against Jim Harbaugh's San Francisco Forty-Niners. On November 17 2013, New Orleans got some revenge on San Francisco. Tied at 20, a great defensive series by the Saints forced the Niners to punt with 1:48 left on the clock. A penalty on San Francisco's special teams ace Kassim Osgood gave New Orleans the ball at their 40-yard line and Brees went to work on the vaunted Forty-Niners defense. With crucial receptions by wide receiver Marques Colston (20 yards) and tight end Jimmy Graham (12 yards) the Saints got to San Francisco's 13-yard line with only three seconds on the clock. Then much-maligned kicker Garrett Hartley booted a 31-yard field goal right through the uprights, vaulting New Orleans to the victory and an 8-2 record on the season. A priceless shot of Harbaugh's frown was the icing on the cake. 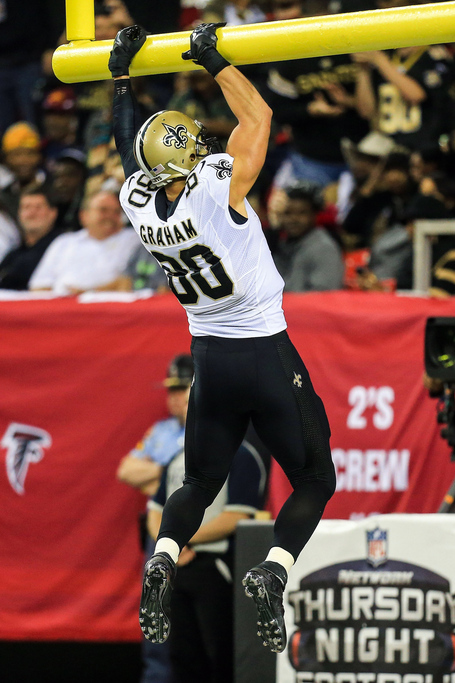 Sandwiched between a home game against San Francisco and a monster Monday Night Football rendezvous with the Seahawks in Seattle, the Saints had a Thursday night date with the struggling Falcons in Atlanta. With a 2-8 record at that time, the Falcons would have loved nothing more than the opportunity to dent the Saints chances at a higher seed in the playoffs. Despite eventually winning the game 17-13, New Orleans produced a sluggish performance, still licking their wounds from the grueling match against the Niners and probably somewhat looking ahead to the matchup with Seattle.

The memorable moment however came in the second quarter; with New Orleans trailing 7-10, Saints quarterback Drew Brees found tight end Jimmy Graham deep for a 44-yard touchdown reception. Graham used an out-and-go double move to lose Falcons strong safety William Moore, then in celebration of his touchdown, dunked the ball over the goal post. Graham hung on the post for a brief instant, bending it in the process. The game was delayed for a few minutes as the Georgia Dome repair crew fixed the damaged post. For the Falcons however, the damage was already done as they would never regain the lead and fall to 2-9. The NFL would eventually create a bogus rule (aka "The Golden Graham Dumb Dunking Rule") that prohibits spiking the ball over the goal post. Soon they'll prohibit putting a little money on (or under) the table for good legal tackles and such...wait! 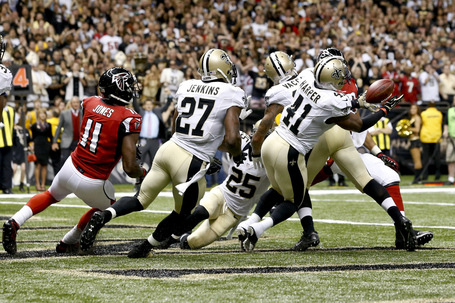 Any win against the Atlanta Falcons is a great win. But when said win ends on a great defensive stand and is crowned by an interception by then-Saints safety Roman "Stone Hands" Harper, then it has to rank up there with the best Saints victories. In Sean Payton's triumphant return to the Saints sidelines, New Orleans got their 2013 season started the right way by sweating out a narrow 23-17 victory against their bitter NFC South rivals. Beating the Falcons doesn't seem to ever be enough for the Payton's Saints. They always seem to find a way to break to Dirty Birds hearts in the process. This time, the Falcons could taste a comeback victory. Trailing 17-23, Atlanta got the ball at its own 20-yard line with 3:12 remaining in the fourth quarter. Quarterback Matt Ryan masterfully drove his team to the Saints 3-yard line with 0:49 left in the game. On 4th and 3, he heaved a pass to ageless tight end Tony Gonzalez. With what looked for a second to result in a sure game-tying touchdown catch, Saints rookie safety Kenny Vaccaro tipped the ball and veteran Saints safety Roman Harper caught the loose football in a forest of arms and bodies falling over in the endzone. The Saints were 1-0 and unknowingly, they had just started the Falcons into a downward spiral that would never recover from.

1. Wild Card - A Road Playoffs Win? You Kidding Me? 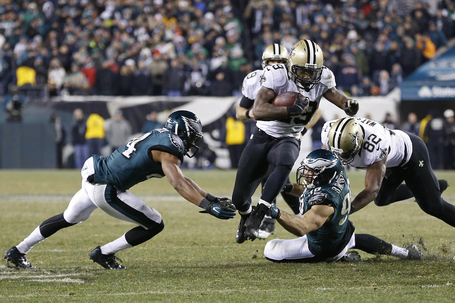 No, I'm not kidding you! The Saints, the "I can't play in the cold because I play inside a dome" New Orleans Saints won a road playoff game, the first in their franchise history. After finishing second in the NFC South, New Orleans travelled to the City of Brotherly Love to play the Philadelphia Eagles in the NFC Wild Card round on January 4 2014. And if I didn't emphasize it enough, it was cold: the temperature in Philadelphia was measured at 25 ºF (-3.9 ºC) at kickoff. That's like Siberia if you live in New Orleans.

What was truly beautiful about that game was how the Saints won it. New Orleans played the hard-nosed, grind-it-out brand of football that has so rarely been associated with the high-flying passing style of the Payton-era. Against the Eagles, the Saints rushed 36 times for 185 yards. Even more impressive for a Payton-led team, they passed the ball less times (30) than they rushed it, a fairly rare occurrence. Ok, it just never happens.

Let me illustrate in a bit more details how awesome and out of character this win was. The Saints got the ball with 4:44 remaining on the clock in the fourth quarter, trailing 23-24. They then ran 10 plays, taking the clock all the way down to zero, ending with a field goal by kicker Shayne Graham as time expired. Of the 10 plays the Saints used to end the game, eight were called runs, one was a pass and the last one was the winning field goal for a 26-24 triumph. Wow!

Because I'm an equal-opportunity writer, my next piece will be on my top five worst moments of the 2013 season. Brace yourselves! But for now, enjoy this one and here's to a lot more moments like the ones in this piece in 2014!