How The 2013 New Orleans Saints Were Beaten: Wrapping it all Up

Summarizing what we learned from the five teams that beat the Saints last season and what it means for 2014.

Share All sharing options for: How The 2013 New Orleans Saints Were Beaten: Wrapping it all Up

The New Orleans Saints of 2013 were a very strong team, but they lacked in one major area: finesse.  Strong, physical teams found ways to beat them.  The Saints were second in the league against the pass defensively, 19th against the run.  Teams like St. Louis and New York skewed the stats, sure, but there is a reason that those teams defeated them.  The Saints were human, and a lack of true playmaking defensively (i.e. creating turnovers) and balance offensively (teams keyed in on Brees in 2013, there’s a reason he got sacked so often) were what did them in on many of their losses.  It boiled down to simple stats: The Saints needed to control the ball more than their opponents, and they needed their defense to make plays.  If neither of those things happened, then they didn’t win that game. 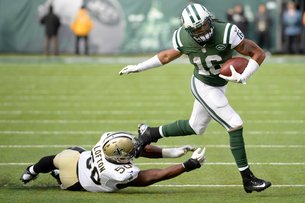 Will it continue next year?

Obviously this enters a realm that I hate, a realm of speculation, but the offseason acquisitions of the Saints directly affect these needs.  The Saints will run the ball tougher next season and Armstead improved nearly exponentially week to week as a run blocker.  Jairus Byrd adds a playmaker to a Saints defense that didn’t make big plays last year, and Champ Bailey, Corey White and Patrick Robinson create competition for the two slot.  Hopefully this elevates their game.

The teams that beat the Saints in 2013 did so through toughness and by not making silly mistakes.  They just stayed on their grind effectively and made the plays that they had to to win.  The 2013 Saints were tremendously talented, but they didn't have the strength that the teams that beat them did.  If they're going to take the next step, the Saints need to be patient and effectively grind it out against teams willing to do so against them.

The stock quotes actually were what beat the Saints in 2013.  Teams that pressured Brees and controlled clock beat New Orleans.  They struggled in the tough, physical games.  With the moves that the Saints have made this offseason, we as fans can hope that they addressed these issues adequately.  This, of course, can only be determined when the season begins, but it will be the deciding factor in whether or not they're a Super Bowl caliber team.

The Saints won the Super Bowl in 2009 through finesse.  People tend to forget that Brees threw less passes in black & gold in 2009 than any other season.  A smashmouth team can win Super Bowls, ask the Saints, or the Ravens, or the Seahawks.  It all comes down to toughness.  The Saints struggled with that mentality at times last season.  Hopefully in 2014 they build upon the mistakes that they made, and hit the ceiling that we all know that they’re capable of: Super Bowl win number 2.