Where Were You: Steve Gleason's Blocked Punt

On September 25, 2006, Steve Gleason made arguably the most memorable play in New Orleans Saints history. Where were you for this unforgettable moment?

Share All sharing options for: Where Were You: Steve Gleason's Blocked Punt

The Saints were coming off the most tragic time in franchise history, but hope was abundant in the early stages of the '06 season.  A new regime led by rookie head coach Sean Payton and free agent quarterback Drew Brees had ushered in a new era of optimism and pride in New Orleans, and the team was laying a solid foundation to build upon.  Just as importantly, the team was winning games right away.  By the time of the long-awaited "Homecoming" game, the Saints were already 2-0.

After extensive renovations made on a razor-thin deadline, the Superdome was once again ready to stand proud as the home of the Saints and a beacon of joy to New Orleans.  With thousands of proud and excited Saints fans waiting outside the Dome for the doors to open once again, who better to face the hometown team than their longtime rivals, the Atlanta Falcons.  The game would be a matchup of unbeaten teams as Atlanta was 2-0 as well, having won their first two games against Carolina and Tampa Bay by a combined score of 34-9.  As much as the game meant emotionally, it would also have a profound meaning in the standings going forward.

Not only were the Falcons awaiting the Saints on ESPN's Monday Night Football that fateful evening, but also a capacity crowd of 70,000+ Saints fans and a pre-game concert featuring iconic bands Green Day and U2.  There was a definite playoff feel with this game/event that arguably rivaled that of a Super Bowl.  The Saints' defense rode the wave of emotion forcing an Atlanta three-and-out on the first series of the game.  The emotions of the team and the fans in attendance crescendoed with the ensuing punt, which will stand in Saints lore for all time.

Here is that transcendent moment in all of its glory:

Steve Gleason's heads-up play immediately made him a Saints legend.  At that moment, the game was effectively over as the Falcons were buried in an avalanche of emotion and celebration.  The broadcast silence from the ESPN crew following Curtis Deloatch's goalpost dunk was refreshingly appropriate, allowing the fans to convey the moment to the national audience instead.  It spoke louder and more clearly than anything the MNF crew ever could.

The Saints rode the emotions of the night to a 23-3 victory and an early first place lead in the NFC South.  The Saints would complete the emotional 2006 season with a 10-6 record, an NFC South Championship, a playoff victory over the Philadelphia Eagles, and the franchise's first appearance in the NFC Championship Game.  Despite all of the fantastic moments of that season, the best was still yet to come in the near future.  With that being said though, the argument can easily be made that no moment in Saints history has ever eclipsed, or may ever eclipse, Steve Gleason's gift to New Orleans.

I was in my current home in Los Angeles and I waited for this game with an anticipation that is reserved for very few events.  I remember seeing images of the re-opening banner on the side of the battered Superdome and I realized that it stood for much more than the words that were written on it. 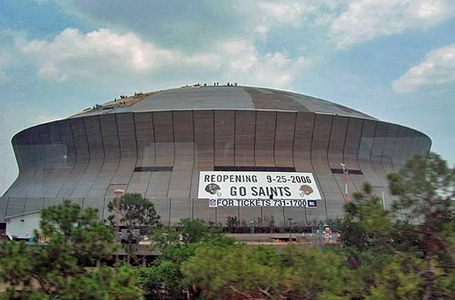 I was beyond ready for the game, when it finally arrived.  I watched every moment of the pre-game festivities, especially the unveiling of the new banner that announced our rebirth to the world. 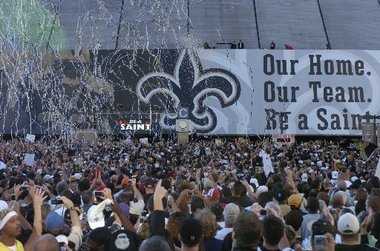 The entire process was almost cathartic.  I was done with the pageantry and ready to finally get back to football, Saints football.  When Steve Gleason rushed through untouched, I was floored.  It was as if divine intervention was in play at that moment.  I recall clapping loudly as Michael Koenen's punt hit the turf, but I was pretty much stunned.  I didn't yell or leap, I just took it all in, all of it, and it was glorious.  The rest of the game was a blur of joy and satisfaction, it was lagniappe, as they say.

The Saints came home, not as wounded victims, or even as conquering heroes, but mostly as family returning home from the storm.  We couldn't have been happier to have them back, and for them to have us.  It truly was a homecoming and a rebirth, in one unparalleled moment.  Thank you Steve Gleason, for providing us that moment.

Here is our very own Dave Cariello's recollection of that game from inside the Dome:

In addition to being incredibly excited about the first game back in the Superdome since Katrina, I had been drinking a little before the game so I was thoroughly primed and ready to go. The Saints were already 2-0 up to that point so things for the Saints were already looking much better than the season prior. I was sitting in section 108 at that time; I had an aisle seat. Green Day and U2 got everyone pumped before the game. The Falcons got the ball first to start the game and from that very first series the Dome was louder and the atmosphere more electric than I had ever experienced. The noise level and excitement began to crescendo as the Saints defense held their ground on first and second down, reaching it's pinnacle with a Michael Vick sack for a three and out. And then... the blocked punt. Everything just exploded. The only thing I can really remember is stepping out of my row, jumping and screaming with my arms flailing around like a lunatic in complete disbelief. Everyone knew the game was over from that point on.

Tell us your stories, memories, and impressions from this unforgettable moment in New Orleans history.  Where were you, Who Dat Nation?