Countdown to the 2014 Regular Season: Number 47

We continue counting down the days until the beginning of the Saints regular season, and taking a look at the roster. Today's players: #47 LS Justin Drescher and #97 DE Glenn Foster... and check out that car Foster is selling!

Share All sharing options for: Countdown to the 2014 Regular Season: Number 47

As we count down the final 50 days of the New Orleans Saints preseason, we're getting to know a little bit about those players who have signed on to bring home another Lombardi trophy.

Instead of drawing out the countdown over 100 days, we're looking at player numbers 99 to 51 as we cover the countdown from 49 to 1.  Not all of them will make the final 53-man roster, but the whoever is on the roster (and maybe some who aren't) when their numbers come due will at least get a blurb, to help our community become a bit more familiar with the players who have been suiting up in black and gold.

So, with no more ado:

Justin Drescher is the second player in our countdown (after Curtis Lofton) to come to New Orleans from Atlanta.  The long snapper was originally signed out of Colorado by the Falcons as a UDFA after the 2010 NFL Draft; but they cut him less than two months later, before the start of training camp.  That November, Jake Ingram botched an extra point snap in Week 11 of the 2010 season, his only game with the Saints after being brought in to replace the injured Jason Kyle.  A week later, the Saints brought Drescher in to replace Ingram.

Garrett Hartley had also missed his only field goal attempt, a 27-yarder, in Week 11.  After Sean Payton had brought kicker John Carney back for two games earlier in the season -- following Hartley's missed field goal which would have given the Saints a win over the Falcons -- it was rumored that Drescher was brought in so quickly after Ingram (at least in part) to send a message that jobs were on the line if the kicking squad did not improve its roller-coaster tendencies.

Drescher has handled snapping duties for extra points, field goals, and punts in all 54 regular season games and 4 postseason contests since New Orleans picked up the free agent to finish out his rookie year.  After signing him for the last six weeks of the 2010 season, and the 2011 season, the Saints signed him for one more year in 2012 before finally locking him up with a four-year contract last March.

One of several notches on PayLoo's UDFA Championship belt, Glenn Foster signed with the Saints as a UDFA out of Illinois after the 2013 NFL Draft.  He was considered a big surprise in training camp, and showed flashes of dominance during the preseason.  Having outplayed Tyrunn Walker and Tom Johnson during the preseason, Foster won the battle for a roster spot behind starting DE's Cam Jordan and Akiem Hicks.

After missing the first two games of the regular season with an ankle injury, Foster appeared in nine straight games before being carted off of the field with a knee injury, during the Week 12 game in Atlanta.  Sidelined for two weeks with his knee injury, the rookie worked his way back healthy enough to play in the last three games of the regular season, and both postseason contests.

In twelve regular season appearances, the defensive end led the team's rookies with three sacks.  Foster also recorded nine tackles and one pass defense during his first year in the defensive line rotation.  A sizable, physical player with a talent for rushing the passer, Foster should see his role in Rob Ryan's impressive defense increase as he gains more experience as an NFL defensive end.

Lagniappe: Glenn Foster also tweeted this weekend that he is selling his car, because he had to get a bigger truck.  Anyone who wants to buy the below fully chromed 2009 Porsche Cayenne GTS from the Saints DE can see the ad here. 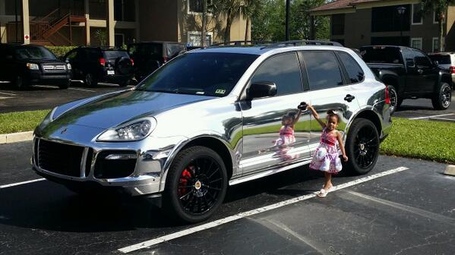