Saints Have Easy Travel Schedule in 2014, Which Could Equal Success

The most successful Saints seasons under Sean Payton have been ones where the team hasn't had to travel very far. 2014 is one of those seasons.

Share All sharing options for: Saints Have Easy Travel Schedule in 2014, Which Could Equal Success

Compared to recent seasons, the New Orleans Saints will have one of he easiest travel schedules in 2014.

The Saints will be travelling 11,268 miles this season, according to Pro Football Reference. Other than the 2011 season, when the only had to travel 10,382 miles, this will be the shortest total distance the Saints will have to travel during the Sean Payton era.

Because the Saints are playing teams in the NFC North and AFC North, they will not have to make any trips west. In fact, the Saints will go no further west than Dallas. Their longest trip will be to Detroit, where they face the Lions on October 19th.

Here is a look at the Saints travel distance by season since 2006.

Below is the 2014 Saints travel map. Click to enlarge. 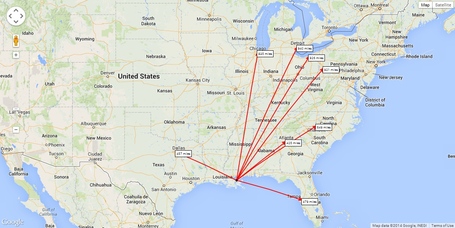