The combination of safeties Jairus Byrd and Kenny Vaccaro was expected to be one of the New Orleans Saints defensive strengths. In their 34-37 overtime loss to the Atlanta Falcons this past Sunday, safety play was one of the Saints big weaknesses

Share All sharing options for: Poor Safety Play Doomed the Saints in Atlanta

Making matters worse, the Falcons defense gave up 472 total yards (333 yards passing), 30 first downs and 139 yards rushing. Meaning that a merely adequate showing by the Saints defense would have likely resulted in a Black and Gold win.

What was so awful defensively for the Saints? Everything! There were so many whiffs and busts I had a hard time picking what dreadful sequence to "highlight" for you. Thankfully, the play of New Orleans highly-touted safeties got me out of my dilemma, while making my stomach turn like bad gumbo from a Seattle "Cajun" restaurant.

After reviewing the tape, one painful evidence was the ineffectiveness of the game plan by defensive coordinator Rob Ryan. Even more alarming was the lack of adjustments as the game wore on. The Saints were "buried two deep" the whole game and never could dig themselves out. It basically seemed as though Ryan had hammered into his defensive backs -namely his safeties, that he didn't want them to get beat over the top. They sure didn't let the ball get behind them, but they got exploited nonetheless.

Trailing 6-0 in the first quarter, the Falcons mount their first effective drive from their own 16-yard line after a three and out in their first possession of the game. They line up with an 11 personnel (1 running back, 1 tight end, 3 wide receivers). New Orleans shows a four down linemen front. 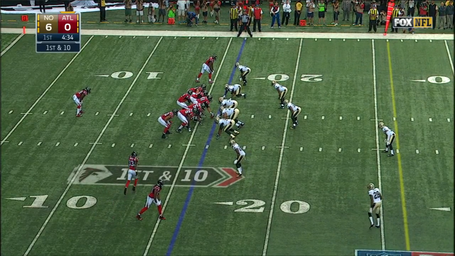 From the Coaches Film view, New Orleans has a single deep safety in Jairus Byrd (#31, red circle) while strong safety Kenny Vaccaro (#32, blue circle) stands about 10 yards from the line of scrimmage. 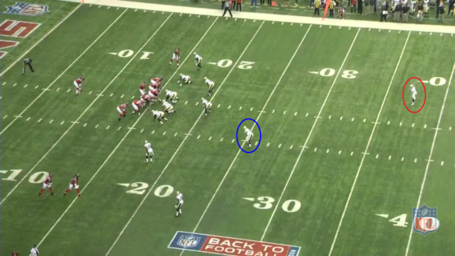 The focus here is the continuing theme of the Saints safeties playing incredibly deep. With Atlanta now on their 33-yard line after Ryan had completed a 17 yards pass to wide receiver Harry Douglas, Vaccaro and Byrd are still playing almost 20 yards away from the line of scrimmage (blue line). 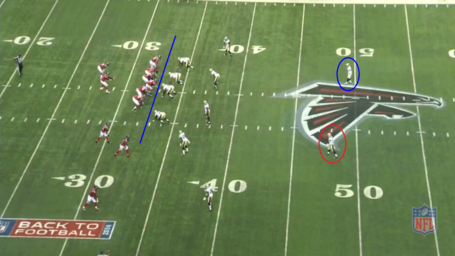 Two plays later, with the Falcons having advanced to New Orleans' 47-yard line, the Saints are once again in a deep cover-two alignment, with Vaccaro (#32, blue circle) and Byrd (#31, red circle) as far as 24 yards from the line of scrimmage. 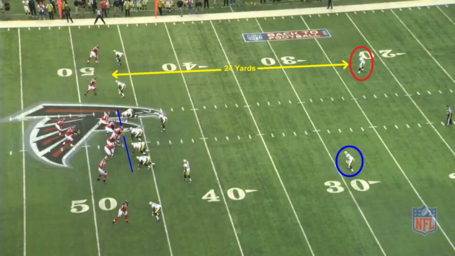 Two snaps later, with the Falcons now on the Saints 30-yard line after gaining another 17 yards, Vaccaro (#32, red circle) motions Byrd (#31, blue circle) to move up closer to the line. This was quite an interesting thing to see, as it almost looked as though Byrd, coming off offseason back surgery, didn't trust his recovery speed enough in case a Falcons wide receiver sprinted past him. 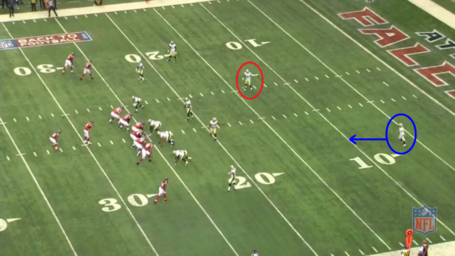 Byrd and Vaccaro run towards the line of scrimmage, as Falcons quarterback Matt Ryan  fakes a handoff to running back Jacquizz Rodgers (yellow circle). 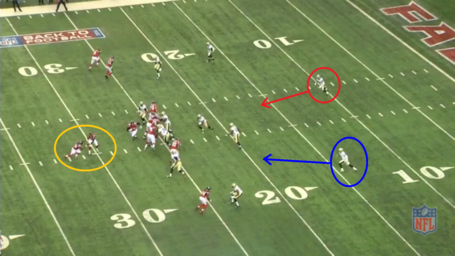 Ryan throws a quick swing pass to wide receiver Julio Jones (#11, yellow circle) and both Saints safeties turn towards the receiver who is likely headed to the end zone. Thanks to Vaccaro telling him to move closer to the line of scrimmage, Byrd (#31, blue circle) can redirect himself towards Jones with a chance to catch up with the speedy receiver before he reaches the end zone. 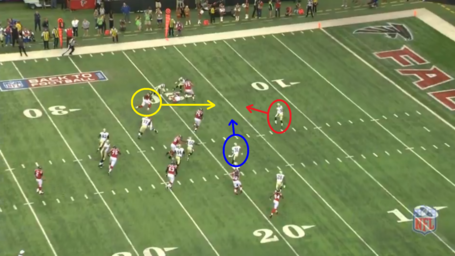 Vaccaro (#32, red arrow), in an uncharacteristically sloppy game for him, overruns the play and whiffs on the tackle. Meanwhile, Byrd (#32, blue circle) has the angle to get to Julio Jones (#11, yellow circle). 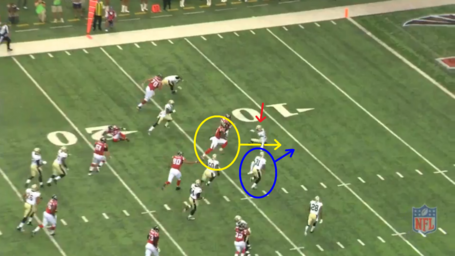 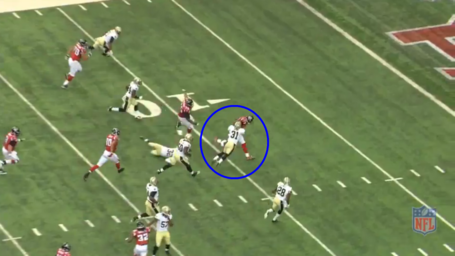 Where Are My Adjustments?

When reviewing the tape, I had almost forgotten that New Orleans took the lead twice in the fourth quarter. Probably because each time, the defense surrendered it. With the Saints leading 27-24, the Falcons started yet another comeback drive from their 6-yard line. 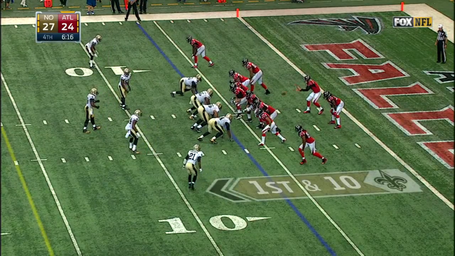 After the snap, Falcons wide receiver Julio Jones (#11, yellow arrow) who is matched up with Saints cornerback Keenan Lewis (#28, pink arrow), runs a corner route towards the sideline. Once again, safety Jairus Byrd (#31, blue circle) is 20 yards deep, leaving a big void behind Lewis in the Saints "cover-two zone" coverage. 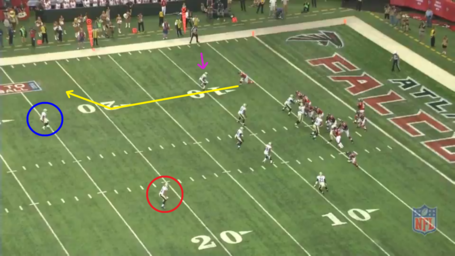 With the Saints safeties playing so far away from their linebackers, Ryan (#2, pink circle) has a huge area (purple square) in which he could throw the ball to open receivers. Had Falcons wide receiver Roddy White run an in-route (red arrow), he'd have been as wide open as Jones running his sideline pattern. 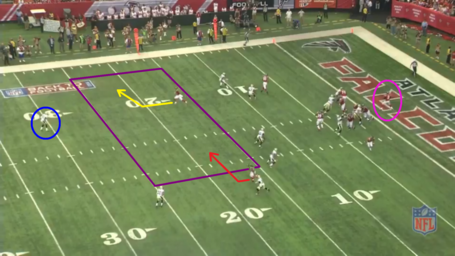 As Jones gets into his break towards the sideline (#11, yellow circle), Byrd (#31, blue circle) is more than 10 yards away from him, as are all the other Saints defenders. It's an easy pitch-and-catch from Ryan to Jones for a quick 23 yards. 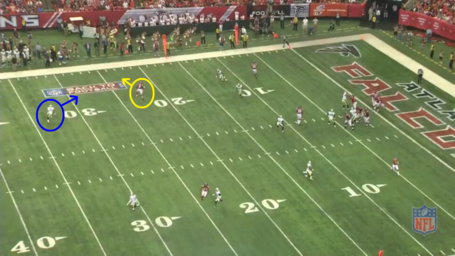 Where in the Name of Jason David

Later in the drive, now in its no-huddle mode, Atlanta lines up with a 10 personnel (1 running back, 0 tight end, 4 wide receivers).

From the Coaches Film view, we can see that the Saints haven't adjusted their safety depth and there is still a big hole behind the linebackers. The Falcons smartly run the same intermediate cornerroute, this time from the slot with wide receiver Harry Douglas (#83, yellow arrow). 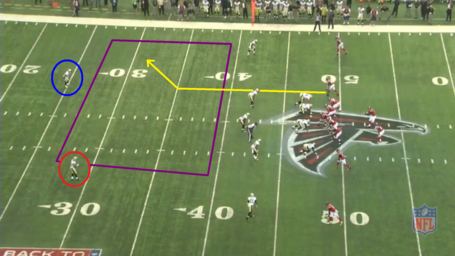 Douglas (#83, yellow arrow) easily runs past linebacker David Hawthorne and as the ball arrives, Byrd (#31, blue circle) is, yet again, 10 yards away. The Falcons get another cool 23 yards en route to taking a 31-27 lead. 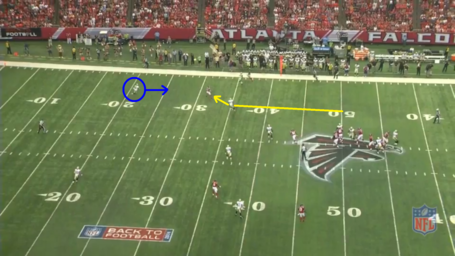 Whether it came from defensive coordinator Rob Ryan's game plan or his players own tendencies, the Saints safeties (and New Orleans' secondary in general) gave way too much respect to the Atlanta Falcons receivers. Kenny Vaccaro, Jairus Byrd and to a lesser extent Rafael Bush were all more spectators than actors in this game. The paltry amount of tackles they amassed in the game where almost all made after a healthy yardage gain by Falcons receivers.

After re-watching the game, it is almost surprising that the Falcons "only" gained 568 yards, given how much room Atlanta's pass catchers were given once they were past the Saints cornerbacks and linebackers.

Now, if you are a Saints fan, I have some (potential) good news: for the next three or four years, the Saints defensive front four is highly unlikely to have as bad a game as they just had in the Georgia Dome. Falcons quarterback Matt Ryan is probably still wondering who were these impostors posing as Saints defensive ends. You know, these guys who lightly grazed Ryan's jersey each time he dropped back to pass and gave him enough time to make a sandwich back there.

The Saints defense got a pretty sizable chunk of humble pie shoved down their throat in Atlanta. Let's hope that the indigestion they got from it made them mad enough to take out their frustration on Browns quarterback Brian Hoyer and Cleveland's offensive line this coming Sunday. Let's face it, if by the end of the next game Hoyer has looked like a Hall of Famer, it might be time to press the panic button and bar Rob Ryan from going to Ms. Mae's until the defense is fixed.

Until then, it was only one (bad) game.

*Jason David is a legend in New Orleans, the greatest defensive back in Saints history at giving up easy catches and touchdowns to opposing teams.