Saints defensive end Cam Jordan came into the 2014 season wearing the laurels of his 12.5 sacks in 2013. So far this year, it seems he has been resting on his accolades a bit more than his coaches would have liked.

Share All sharing options for: Saints: The Curious Case of Cam Jordan

Under the tutelage of head coach Sean Payton, the New Orleans Saints have always been a high-flying offense, forcing defensive coordinators into long nights of game planning against quarterback Drew Brees and his array of offensive weapons.

In 2013, the Saints complemented their powerful attack with a defense that ranked fourth in yards allowed (10th DVOA) and 2nd against the pass (6th DVOA) in the entire National Football League. Leading the charge was Saints defensive end Cameron Jordan. After steadily improving in his first two years in the NFL, Jordan had his coming out party in 2013, leading the Saints with 12.5 sacks and recording a combined 47 tackles (29 solo).

After two games in the 2014 season however, Jordan has been conspicuously absent on the Saints defense. The defensive end, whom people had already pegged as a repeat pro-bowler at the end of the year and the one to set the tone on New Orleans' defensive line has a total of three tackles (two assisted), one quarterback hurry and two passes defended.

Unquestionably, Jordan's year is off to a slow start. How slow exactly? Through the first two games of the 2013 season (Falcons at home, Bucs on the road) Jordan had nine tackles (four solo), one sack, one forced fumble and a quarterback hurry (these numbers are shown in the table below).

Are We Simply Overreacting?

When looking at these stats, here are a few observations we can make:

a)  The difference between one sack through two games last year and none so far isn't exactly something to start freaking out about.

b)  At this point last year, Jordan already had nine tackles, 4 of them solo. This year, only three (one solo). There are two conclusions we can draw from this: either Jordan has become lazy and is just going through the motions out there, or teams are now double-teaming him, making it harder for him to get to the quarterback of to support against the run.

c)  Jordan has the same number of quarterback hits (one) as he had this time last year and he has defended three more passes so far.

All in all, the numbers do not tell much. Yes, Jordan's start to the year has been slower than what it was in 2013, but certainly not as egregiously as most people may have initially thought. We are clearly all overreacting after two weeks because of: a) the way Saints games have ended, each in a loss, with the opposing team driving the length of the field for the tying/winning field goal. And b) we need to find a reason (dare I say a scapegoat) to explain the sudden demise of the Saints defense.

Although they are important, number always tell only part of the story. That's when we need to turn on the tape, because the big eye in the sky rarely lies.

Not Winning the One on One Battles

Effort hasn't been an apparent issue with Jordan, however there have been a few disturbing trends, and one of them has been that the dominance Jordan displayed early last year hasn't shown up in the first two games. It is one thing to miss a sack because the quarterback is scrambling around like Matt Ryan did in the first game. It's an entirely different story to be manhandled at the point of attack by a single blocker. While reviewing this film, I saw multiple instances where Jordan simply could not shed the right tackle or even the tight end blocks.

One example occurs on the Browns very first play from scrimmage. Cleveland's designed play is a simple B-gap run to the right from the I-formation. Jordan (#94, yellow circle) is lined up at the five-technique (outside shoulder of the tackle) opposite Browns right tackle Mitchell Schwartz (#72, red circle). 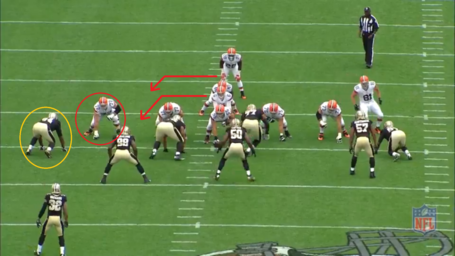 As quarterback Brian Hoyer turns to hand the ball to his running back (red circle), Jordan is pushed outside with relative ease by Schwartz (yellow circle), widening the B-gap and creating a gaping hole for Browns fullback Ray Agnew (#48, red arrow). 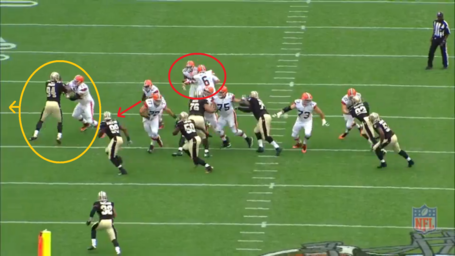 Fortunately for the Saints, linebacker Parys Haralson (#99, yellow circle) shoots the gap and is able to clog the lane until the rest of the Saints defenders catch up to tackle running back Terrance West. 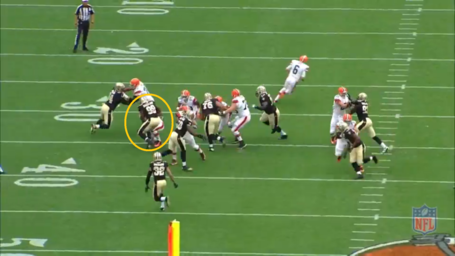 Here is a GIF of the sequence that shows Schwartz taking Jordan out of the play.

Blocked by a Tight End???

Although I'm going to single out one play here, this is something I saw throughout this game for Jordan. With the Browns running the ball well, they obviously used the play-action pass a lot, hoping to suck the defense closer to the line of scrimmage and draw "one on one" coverage on the outside.

In this play, the Browns use a 12 personnel package (1 running back, 2 tight ends). Jordan (#94, yellow circle) is again lined up at the five-technique opposite Schwartz (#72, red circle) 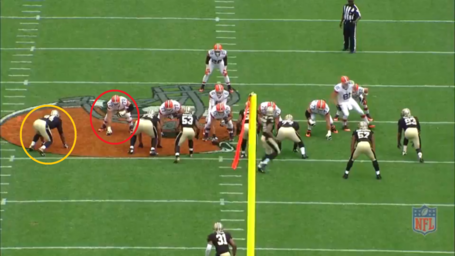 After the snap, as Hoyer turns to face the defense, tight end Gary Barnidge (#82, red circle) goes across the formation to block Jordan. 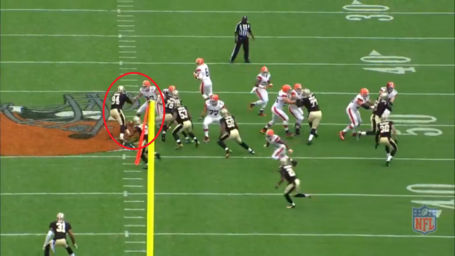 Incredibly, Barnidge is able to single-handedly hold his block on Jordan long enough (red circle) to allow Hoyer to find his running back in the flats for a first down. Also, note the horror that is the "vast plain" allowed to Hoyer by the Saints pass rush as a whole. 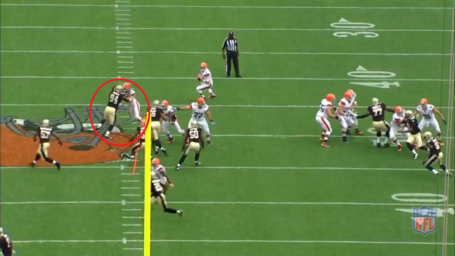 The GIF shows how Jordan is struggling to get through Barnidge, allowing Hoyer to hit West for an 11-yard gain.

Weak Against the Run

Cleveland is a good running team, but against the Browns, Cam Jordan was nearly non-existent against the run. Jimmy Graham could learn something about blocking from Cleveland tight ends, as they were an integral part of the Browns success on the ground. On this play, the very first of the second half, Jordan (#94, red circle) is lined up at the six-technique, right opposite Cleveland tight end Jim Dray (#81, red circle). 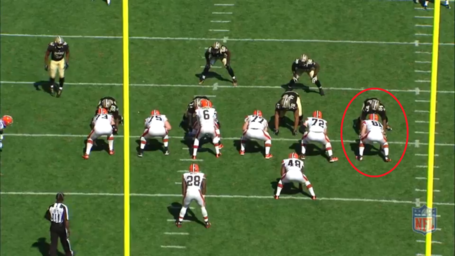 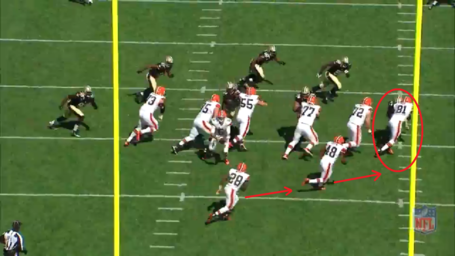 Dray's block on Jordan is so effective (red circle) that it allows Browns right tackle Schwartz (#72) to get to the second level and pin the Saints linebacker to the side, opening the cutback lane for running Terrance West (#28, red arrow). 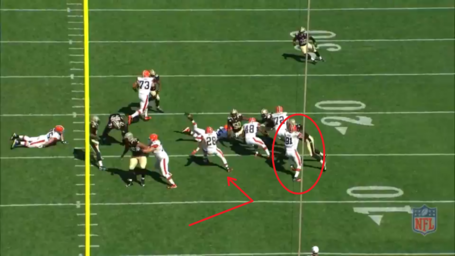 Here's the whole sequence, with Jordan once again, effortlessly pushed aside:

The last two plays are sequences where Cam Jordan, arguably the leader of the Saints defensive line, simply could not effectively shed "one on one" blocks from Browns tight ends. Not a great sight if you're a Saints fans, but an even less palatable film to watch if you're Jordan himself.

Could Jordan be dealing with an injury that the team is keeping under wraps? Did he come into this season thinking he was already a big shot because of last year's success? and thus is it possible he didn't prepare thoroughly enough this offseason?

No matter the reasons for his slow start, Cameron Jordan is better than what he has shown on tape so far this year. With the noise on his side in the Superdome this Sunday, it will be interesting to see if the Cameron Jordan of 2013 finally makes an appearance. The player who, even when he did not get to the quarterback, forced offensive lines to account for wherever he was on the field. Saints fans sure hope to see that man against the Vikings.