When the New Orleans Saints play the Dallas Cowboys on Sunday night in Jerry World, they will likely give up plenty of yards. However, eliminating missed assignments, limiting Dallas' red zone possessions to field goals and getting after Tony Romo will go a long way towards securing a win for the Black and Gold.

Share All sharing options for: Saints vs. Cowboys: Bend But Don't Break

The New Orleans Saints defense hasn't started the 2014 National Football League season the way many expected them too. A highly-ranked unit in 2013, through three games this year, Football Outsiders has the Saints defense as the 31st overall in the NFL with a +15.4% DVOA. Although they're average against the run (17th, with a -8.5% DVOA), the Saints are 30th against the pass (+33.5% DVOA) which does not bode well a few days from facing the likes of quarterback Tony Romo, wide receiver Dez Bryant and tight end Jason Witten of the Dallas Cowboys.

Despite their abysmal pass defense rankings, the Saints have actually improved after each game. Against the Vikings last Sunday, there were far less miscommunications on the field, which some have attributed to a simplification of the defensive calls by coordinator Rob Ryan.

There are three major issues that have contributed to New Orleans' slow defensive start: a) lack of communication, b) lack of a pass rush and c) a porous red zone defense.

Against the Vikings last Sunday, the Saints somewhat shored up the pass rush woes and the red zone defense was stellar. However there were still bouts of mix-ups between the defenders on the field, and it's my firm belief that once they figure out exactly where to be, this defense will be, if not great, solidly above average.

Let's take a look at these three aspects of the defense through three sequences last Sunday.

With the Saints having taken their first possession 80 yards for a touchdown, the Vikings, facing a third and eight at their own 22-yard line looked to respond and quiet a boisterous Super Dome crowd (there are even unsubstantiated reports that Dave and Stu got together and were screaming obnoxiously loud and without their t-shirts) 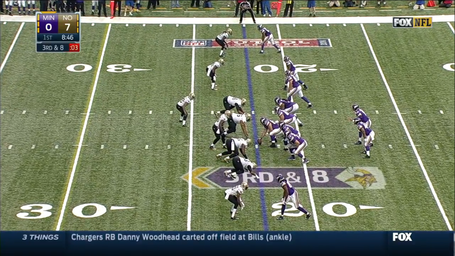 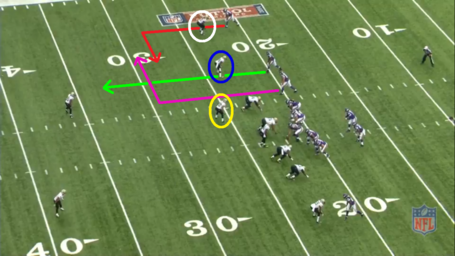 As the ball is snapped, Dixon has Wright closely guarded (white circle), while White (blue arrow) backpedals to stay with Jennings (green arrow). Vaccaro (yellow arrow) has his eyes on tight end Kyle Rudolph (purple arrow) has he starts into his route. 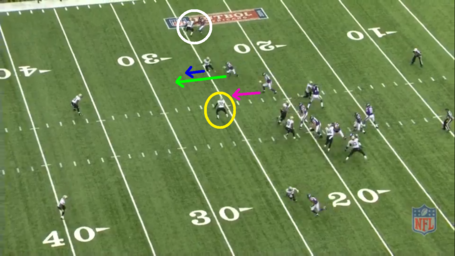 This is where there appears to be a clear communication problem between the Saints defensive backs. As White (blue arrow) is still going backwards with Jennings (purple arrow) despite the fact that he has help over the top in safety Rafael Bush (orange circle), Kenny Vaccaro also starts following Jennings and leaves Rudolph (purple arrow) unattended. Jennings is now between three Saints defenders, while Rudolph is all alone.

We obviously do not know what the exact defensive call was, thus we can only speculate; was White supposed to immediately release Jennings and follow Rudolph while Vaccaro double-teamed the go route? Was Vaccaro supposed to stay with Rudolph and not get influenced by Jennings getting past White since Bush was waiting in coverage? Will will probably never know for sure. What we know is someone messed up. 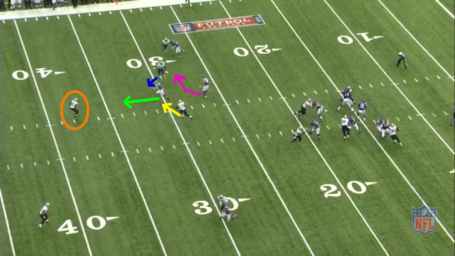 Realizing tht Rudolph is wide open, White starts towards the Vikings tight end but collides with his teammate Brian Dixon and Vikings wide receiver Jarius Wright (white circle). This achieves a natural "pick play" for Minnesota, freeing Rudolph on the crossing out route, with nothing but green grass in front of him if he catches the ball and turns upfield. Meanwhile Vaccaro (yellow circle) and Bush (orange circle) have Jennings bracketed, but he is not the target on the play. 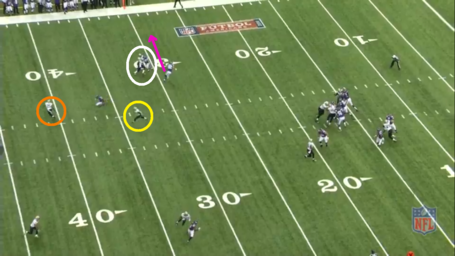 Quarterback Matt Cassel, fortunately for the Saints, feels the pressure mounting in the pocket and throws a hot and inaccurate pass that Rudolph cannot catch. Instead of a sure first down and probably more, the Vikings punt. New Orleans defense gets bailed out by a bad thrown on a play in which once again, some players in the secondary seemed confused about their responsibility. The GIF below shows the sequence.

Keep Calm and Rush the Passer.

Here is a play where the Saints vaunted pass rush of 2013 reared its sexy head. With the Vikings earning their first red zone possession of the afternoon, Minnesota got exactly what they wanted from the Saints defense, with cornerback Keenan Lewis (#28, yellow circle) matched up one on one with Minnesota's best wide receiver, Cordarelle Patterson (#84, purple circle) at the Saints 12-yard line. 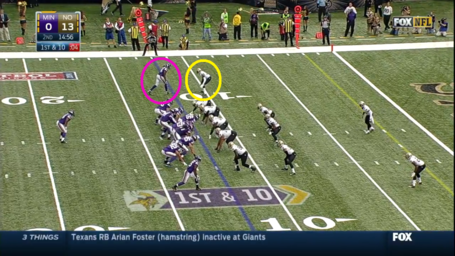 With a first and 10 at the 12-yard line, the Vikings run an out route with Patterson to either get a first down or setup an easy second down. At the snap, Vikings quarterback Matt Cassel (blue circle) knows he's going to Patterson (purple arrow) and looks his way. However, Keenan Lewis (yellow arrow) runs step for step with Patterson, forcing Cassel to wait a split second to allow his receiver to get a bit more separation. It's a split second he doesn't have, as Saints linebacker Junior Galette (orange circle) bears down on Cassel immediately. 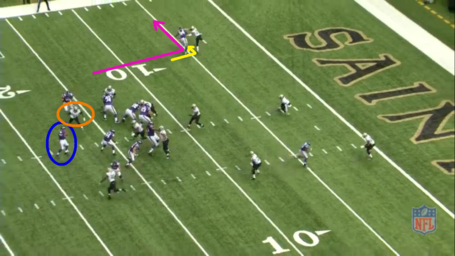 Cassel is forced to throw the ball inaccurately as he gets hit by Galette when he releases the ball. The Vikings would eventually fail to reach the end zone on second and third down and settle for a field goal. Here is a GIF of the sequence. In this play, the Saints defense worked in perfect synergy, with coverage forcing the quarterback to hold the ball and pressure getting to him before he could make a good throw.

Part of playing good defense is diagnosing plays at the line of scrimmage before the snap, or immediately after the snap, and then actually making a play to thwart the opponent's plan. After the Saints offense had gone into a lull, the Vikings had a chance to reduce their deficit to only three points with another red zone opportunity at the Saints 15-yard line. With Minnesota now manned by rookie Teddy Bridgewater, Rob Ryan shows a blitz front with eight men at the line of scrimmage to test the mettle of the young Vikings quarterback. 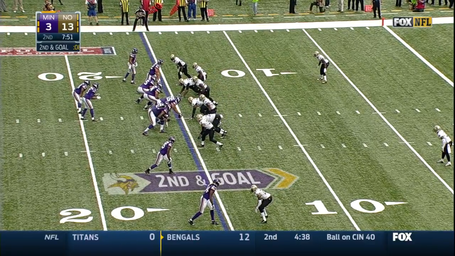 With a young quarterback, the Vikings audible to a screen play, in order to counter the Saints aggressive front and exploit the safeties left in single coverage with heavy blockers. As Minnesota's offensive line lures the Saints pass rush into the backfield, Vikings quarterback Teddy Bridgewater (blue circle) quickly looks to pass the ball to his running back Matt Asiata (red circle). 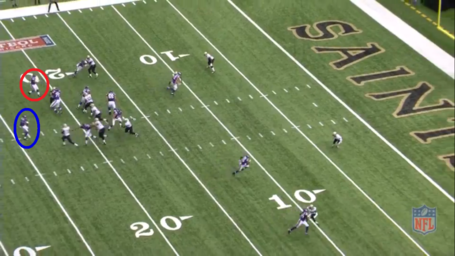 As Asiata receives the ball from a Bridgewater under duress, Saints linebackers Curtis Lofton and Junior Galette immediately recognize the screen play and converge on the Vikings running back five yards behind the line of scrimmage. 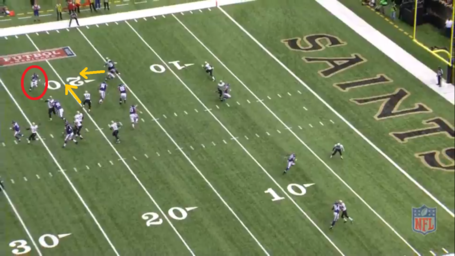 Before Asiata can make a move upfield, he is surrounded by a Saints defense flying to the ball and is tackled for a five yards loss. Here's a GIF of the play.

If New Orleans is to turn around its lackluster start to the 2014 season, this is the Saints defense that will carry it where it wants to go. One that figures out assignments before the ball is snapped, pressures the quarterback and tackles ball carriers as if they'd stolen their lunch money. Sunday night in Dallas, the Saints might bend, but they'll be successful if they don't break. Rob Ryan said his unit would eventually be great; in three days we get to see if his crew has once again gotten better from one game to the next. If that is the case, a victory in "Jerry World" and a 2-2 record are more than attainable.