After Being Traded to Seattle Seahawks, Jimmy Graham Can Now Retire

Graham made a serious promise four years ago. Will he stick to it?

Share All sharing options for: After Being Traded to Seattle Seahawks, Jimmy Graham Can Now Retire 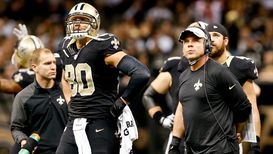 Summary or blurb about the related article

Now that the New Orleans Saints have traded Jimmy Graham (and a 4th round pick) to the Seattle Seahawks for center Max Unger and a 1st round draft pick, the former basketball-playing tight end can start thinking about retiring before playing another game.

Why would a 28-year old Pro Bowler in the prime of his career retire now? Because he's no longer catching passes from his favorite quarterback, Drew Brees. Remember when Graham said this...

"I told Drew that whenever he decides to retire, I'm going to retire,'' Graham said. "I'll never play with another quarterback. I'm really serious about that.''

Jimmy's a man of his word, right? He wouldn't just say things without meaning it, would he? WOULD HE!?!? Unless he never thought about the possibility that he could actually be traded. Unfortunately for Graham, that day has arrived.