Junior Galette Sounds Off Against Saints Through Rants On Girlfriend's Twitter

Deleting your Twitter these days is like donating to PETA. It's a nice gesture and someday, somewhere along the road it may benefit someone or something; but it really doesn't MEAN anything. Days after being released by the Saints amidst questions of his character, Galette proceeded to answer every question that anyone may have had about his character through exposing intimate details about the Saints' locker room with his girlfriend's Twitter (which has since been deleted). 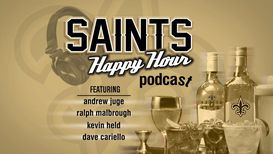 The boys break down the entire Junior Galette Twitter rant as only they can do.

After his release on Thursday, Junior Galette seemed to think to himself, "Okay, I need to go about this the right way.  This is going to be a difficult time, and I don't want to sound off on anyone on social media and make myself look bad."  So he deleted his Twitter account.  But fans... uh... find a way.  Yes, it's stupid for fans to antagonize players on Twitter, but it's even stupider for the players to respond, as they have a future to account for.  About a day later, Galette decided to COMPLETELY ignore that instinct, and went "whatever, I'm doing it anyways."

Galette's girlfriend and, what appears to be Galette himself, are in the midst of a war that they're raging against the world, a veritable dynamic duo of horrible grammar and copious amounts of shade.  No fan is too irrelevant, no fan too small, they will root out the insults and tear through them all.  However, Galette's tirades aren't strictly personal.  He's going after the Saints' organization as well, players and coaches alike.  Here are a few of his most notable tweets, along with a few thoughts on them.*

Not going to lie, I love this one because I love 49ers fans in pain, and this image perfectly encapsulates that pain.  But there's another reason.  If Saints fans will remember the hit correctly, this wasn't some kind of amazing play from Brooks.  It was a missed assignment on the part of the entire offensive line.  Zach Strief deked inside, and Brooks got around the edge.  Also, not to sell Galette's talent short, but Brooks is almost EXACTLY half the pass rusher that he is.  He certainly isn't a scrub, by any means.

If the Saints had released these players and not done ANYTHING to replace them, I'd be all about this.  Okay yeah, losing Jimmy Graham and Kenny Stills hurts.  Curtis Lofton too.  Even Benjamin Grubbs, a little.  But Graham was flipped for Max Unger and Stephone Anthony, Stills for Dannell Ellerbe and PJ Williams, and Lofton and Grubbs for money, which was in short supply.  In the sense that the Saints lost talent, they certainly aren't wrong.  But they did gain some talent too.  It's 50/50 as to whether or not their gamble will pay off, but they aren't unequivocally worse than they were before the off-season started.

This one hurt a little, in the sense that it isn't entirely untrue.  The Saints signed Galette to a huge deal, but that should really be opening his eyes a little as to just what cutting him here means.  Teams aren't going to like going off on tirades like this, so if he wants to have a career in the near future he may want to avoid bragging about that "one year, $20 million deal," because THAT WASN'T THE DEAL.  This is a stupid, stupid thing to say and in my head canon Galette was over her shoulder with his eyes wide muttering "Uh, baby?  Baby just...yeah.  Yeah okay.  Yeah you got 'em."  Oh, and No Knees Spence?  Don't hate the man for getting signed.  It's totally going to be No Knees Kikaha (that's a joke, I'm actually really high on Kikaha).

This one is funny for a couple of reasons.  1.) Momentum isn't a football thing, it's a physics thing.  2.) Tyron Smith manhandled Galette, that's kind of what Smith does.  3.) You can't establish a ton of momentum at the LoS, and a good lineman won't have his momentum consistently used against him, and 4.) Galette is not entirely at fault here, because that Caitlyn Jenner-Galette burn was pretty lazy.

Don't really have a quip for this one, it just felt important.  Though there is a beautiful irony that this one got sent to "SaintsTruth."  Oh, and Strief hasn't been particularly bad the last few years barring a few lapses at the line.

I'm just really happy to hear that Colston is a good guy, like we needed reaffirmation.

I'm not totally sure what to make of this one, because as you get older your arm diminishes.  Much like momentum is a physics thing, age is an... Age... Thing.  That isn't exactly insider information.

I'm skipping one conversation that doesn't hold anything important as far as the team goes, but I highly recommend reading the riveting stuff that was said in a few of the personal conversations.

The Juicy Fruit criticism if fair, the flavor lasts like 11 seconds and then your breath smells ridiculous.  When it comes to gum, don't overthink it, mint (or Doublemint) will suffice just fine.  Strief must've done something because he got savaged in these tweets, and I'll repeat that he hasn't even been bad.  I wouldn't be shocked if any of the things about Payton are true (that's a joke, I totally would be), but he's a little bit of a crazy person for sure.

It's hard to say how much of this is actually Galette.  What with it being his girlfriend and all, there's no doubt that she heard a lot, and most of these comments seem to come from a third party.  If it's not Junior, or Junior speaking directly to his girlfriend, she sure knows a lot about football.

But this isn't good, lightheartedness aside.  The Saints don't do well in the public eye.  Every team has dirty laundry, sure, but not every team has that laundry come to light in such a candid manner.  This is the kind of things that, as a fan, you hope will be dismissed as the ramblings of a maniac, because if they gain steam the Saints are going to face a lot of introspection in the near future.  One thing not mentioned in this album is the alleged $7 million offer from Tampa Bay being "announced Tuesday."  If that's true, the Saints are going to face a jaded, angry Galette twice a year on an already talented TB line, and there certainly seems to be enough bad blood here to justify taking a reasonable contract to play for a rival.

It will be fascinating to see how this saga plays out, and see if Galette comments on the deleted account.  If he does, then he'll have a lot of answering to do, not only to the league, but also to the players whose trust he betrayed.

*All of the above screenshots come courtesy of Twitter user @Kg7max1.

And here is the best of the rest we found, including direct insults at former Saints players like Jimmy Graham, Will Smith, Scott Fujita, and Scott Shanle: