Saints fans have been panicking all morning but it appears Drew Brees' shoulder injury may not be as bad as initially reported. 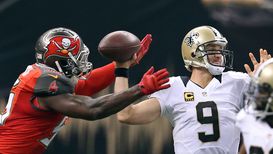 See for yourself how Brees injured his shoulder.

Saints quarterback Drew Brees suffered a shoulder injury during the team's loss to the Tampa Bay Buccaneers Sunday causing a wave of panic in Who Dat Nation.

Earlier today, Ian Rapoport reported that Brees was likely to miss at least some time because of the injury.

Sources: #Saints believe QB Drew Brees has a shoulder injury that will likely cause him to miss games, potentially several games.

But good news has now surfaced reporting that the shoulder injury is not serious and Brees could be ready to return at any time, depending on his response to treatment.

Of course if Brees is able to play, the question remains just how much that injury will hamper his throwing motion and how effective he'll be.

UPDATE: Brees' injury has been diagnosed as a bruised rotator cuff with no tear visible.

Brees' MRI showed a bruised rotator cuff. Not torn, per sources. Dr. James Andrews also will take a look at MRI for a second opinion.