With the infusion of players the past couple of years the team is getting younger. Let's take a look at the offensive line.

With the release of several veteran player, particularly, Jahri Evans, Ben Watson and Brandon Browner, the New Orleans Saints have grown younger. I'm going to look at the offensive line in this review.

Much has been said about the concern of protecting QB Drew Brees in 2016. The biggest concern has been the guard position with the release of longtime veteran Jahri Evans. Let's face it, Father time caught up with the big guy. We all love and remember what Jahri has done for the team during his tenure, but the youth movement is under way. The oldest remaining member on the O-line is Zach Strief. Currently 32 Zach will turn 33 on 9-22-16 and his days are likely numbered as well. I wish to thank Blogging the Boys for the charts I will use below. For a complete team break down you can go to ourlads.com for Team Depth Charts.

First let's look at the age distribution of starting offensive players in the NFL for 2016. 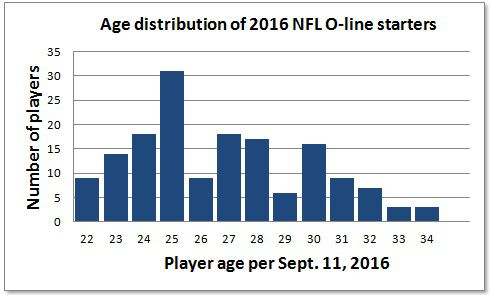 The number of offensive line players who are over 30 is trending smaller in a time when NFL players in general are becoming larger and faster. The Saints are following this trend as well. They drafted Andrus Peat in the 1st round in 2015 as well as signed several UDFAs in 2016 to address their needs. According to coach Sean Payton in yesterday's press conference, they are counting on Peat to start at either RG or RT.

Also 2015 UDFA DT Kaleb Eulls, out of Mississippi State, has been moved to the guard position. Eulls made the 53 man roster last season playing in 4 games on special teams. The Saints are apparently taking Drew's health seriously and exploring all options.

Next chart breaks down average age of all 32 teams' O-line.

As you can see the Saints have the 10th youngest projected starting O-line. With Zach Strief on the roster the average age of the players on the line is 26.4. Actually there are 3 teams, theGiants, Saints, and Broncos with the same average age. Of course training camp and preseason will determine who actually starts and this age average could be even lower. Other than a couple of games early in the 2015 season, Strief graded pretty good at RT and a starting job, either as RT or RG will be his to lose. It is obvious that the team is moving to younger team philosophy, and Zach's veteran presence is still valued by the organization. At 33 the reality is he will likely be cut at some point after the 2016 season. I could even see him still with the team in 2017 as a depth player, but his value to cost ratio would have to be good enough for the Saints to retain him.