How would you prefer the Atlanta Falcons lose on Saturday?

In a blowout or in a close one?

Share All sharing options for: How would you prefer the Atlanta Falcons lose on Saturday?

Of course all New Orleans Saints fans want the Atlanta Falcons to lose Saturday versus the Seattle Seahawks. That's a given. While no Saints fan typically actively cheers for the Seahawks, it's really a lesser of two evils here, and it's not even that close. The Dirty Birds are the division rival. Their loss would be that much sweeter than seeing Richard Sherman, Russell Wilson and Company having to head back to Seattle with the "L."

So the question really becomes:

Which would you prefer: the Atlanta Falcons to get blown out and embarrassed, or for a heart-breaking loss where defeat is snatched from the jaws of victory?

There's really precedent for both.

In 2011, the Atlanta Falcons travelled to the New York Giants to face the G-Men in the NFC Wild Card round. After getting a quick safety to start the game and go up 2-0, the Atlanta Falcons would fail to score the rest of the contest, losing by a final score of 2-24. QB Matt Ryan thew for less than 200 passing yards and the Falcons as a team rushed for only 61 yards. 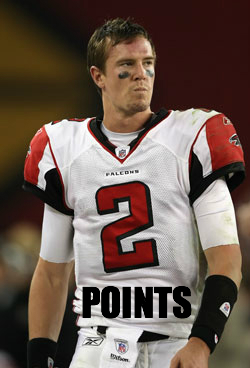 Scoring only two points in a playoff game was an NFL first, and just look at this win probability chart:

The Falcons were never really in this game the entire second half.

The Atlanta Falcons beat the same Seattle Seahawks at home 30-28 to advance to the NFC Championship Game. The Falcons hosted Colin Kaepernick and the San Francisco 49ers, scoring 10 quick points in the first quarter. At halftime, the Falcons maintained their 10-point lead up 14-24. In the second half, the 49ers scored 14 points of their own, including a Frank Gore rushing TD with 8 minutes left in the game. Needing a touchdown to win, the Falcons had to go for it on 4th down with a minute left to play, deep in San Francisco territory. Matt Ryan missed WR Roddy White for the conversion, the Falcons turned the ball over on downs, and Atlanta would go on to lose 28-24.

Into the second quarter of the game, the Atlanta Falcons had approximately a 90% chance of going on to win the game. Obviously that didn't happen, so check out this win probability chart:

So I understand there is the argument to be made that if the Falcons won that game against the 49ers but then went on to lose the Super Bowl, a Super Bowl loss (in either a blowout or nail-biter) is more devastating than a playoff loss early in the postseason. I understand that argument, but personally, I don't even want to see the Falcons get the NFC Championship game.

So what says you, you unbiased Saints fans? Would you rather see the Falcons lose in an embarrassing blowout where the outcome is never really in question like in 2011, or in a heart-breaking defeat that leaves the fans hoping the entire way only to be let down, a la 2012?

Vote in the poll. Explain in the comments. Send me presents.