Full recap of the Saints at Ravens week 1 preseason game.

Share All sharing options for: Turnovers doom Saints in preseason opener to Ravens

Taysom Hill gets the start for the Saints, with Sean Payton saying in the pre-game that Hill will get around 18 plays before Jameis Winston comes in. The New Orleans Saints offense started off badly, surrendering three turnovers in the first quarter alone. Running backs Latavius Murray and Devonta Freeman both put the ball on the ground. Taysom Hill then threw an interception on a miscommunication with Ty Montgomery. Hill also had another interception that the Ravens defense dropped. The Saints were moving the ball throughout the quarter, but mistakes derailed all momentum.

The Saints defense picked right up where they left off in 2020. This Saints front looked great in the first quarter and that is without Cameron Jordan nor Demario Davis on the field. They did not surrender a first down in the quarter. Zach Baun also flashed several times during the first quarter. This will likely bring some much needed relief to the Who Dat Nation who have been begging for a respectable linebacker unit. Saints hold the Baltimore Ravens scoreless in the first quarter, even after three turnovers by the offense.

Jameis Winston comes in after Hill gets three full drives. The offense looked shaky at times after the quarterback change. Tony Jones Jr comes in at running back and gives an immediate jolt to the offense. In one drive, Jones Jr goes for 63 yards and finishes the drive with an 18-yard touchdown to put the Saints on top. The Saints offense did seem to run under center more with Winston on the field than with Hill.

Later in the quarter, Winston settles in and runs a perfect two-minute drive for the Saints. Winston uses seven plays to go 80 yards, finishing with a touchdown to Lil’Jordan Humphrey. Winston looked in command of the offense during this drive, hitting five different receivers, the longest to tight end Juwan Johnson for 33 yards. Winston and the Saints did get another quick drive after a Ravens turnover, but Winston and Humphrey missed a connection and the jump ball goes back to the Ravens. The ying and yang of Jameis Winston at quarterback really showed in this quarter.

Marcus Davenport is in mid-season form already. Davenport was unblockable for the most part and interrupted several snaps for Trace McSorley, who got the start for Lamar Jackson. The Ravens finally got a first down with slightly over 10 minutes left in the second quarter. The Ravens tested rookie Paulson Adebo in the second quarter but he showed that he was up for the challenge. Adebo was playing physical and making tackles when called upon. Promising start for the rookie. Another rookie gets an interception late in the game, with Bryce Thompson picking off McSorley late in the quarter. Saints bend but not break, allowing three field goals in the quarter though. 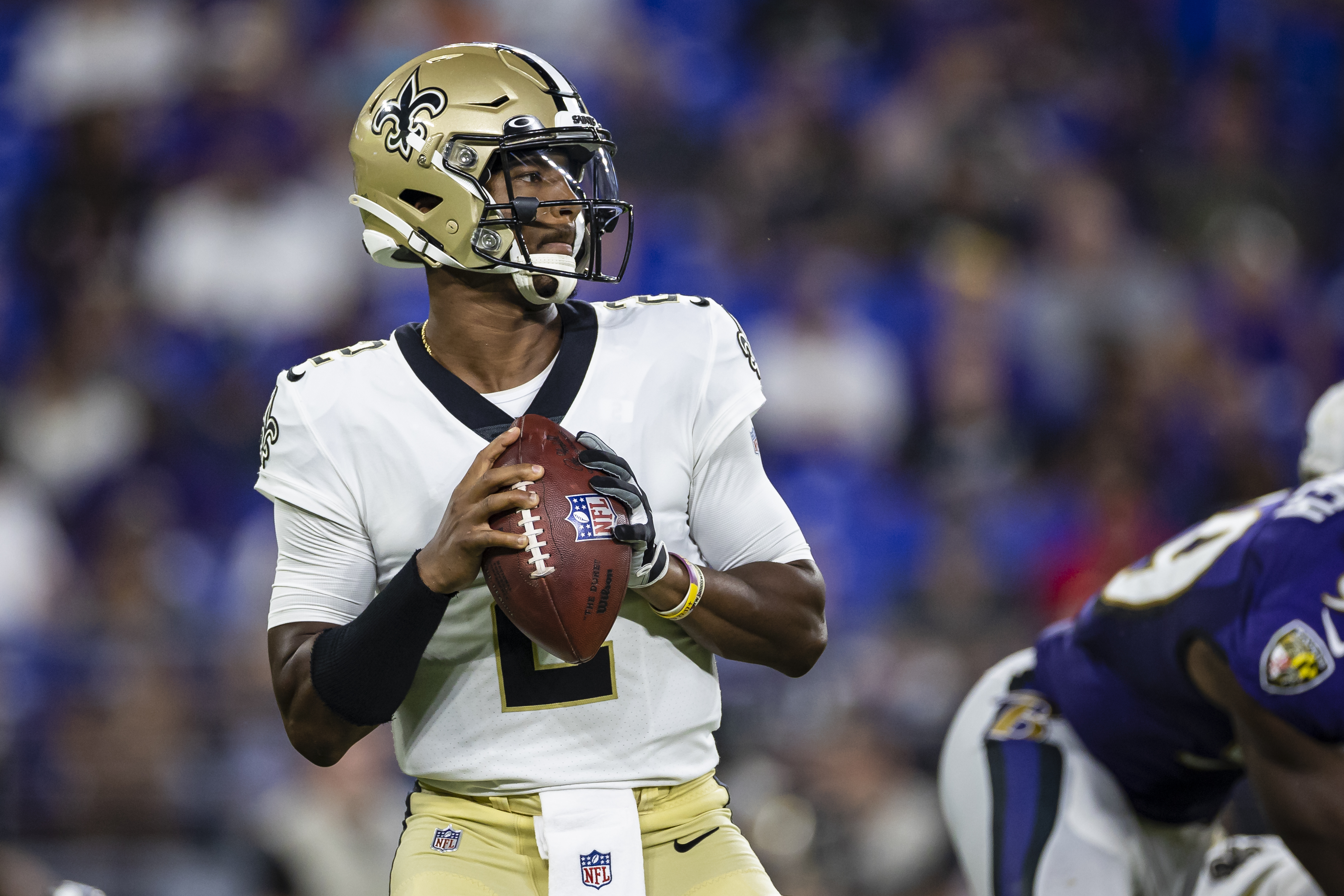 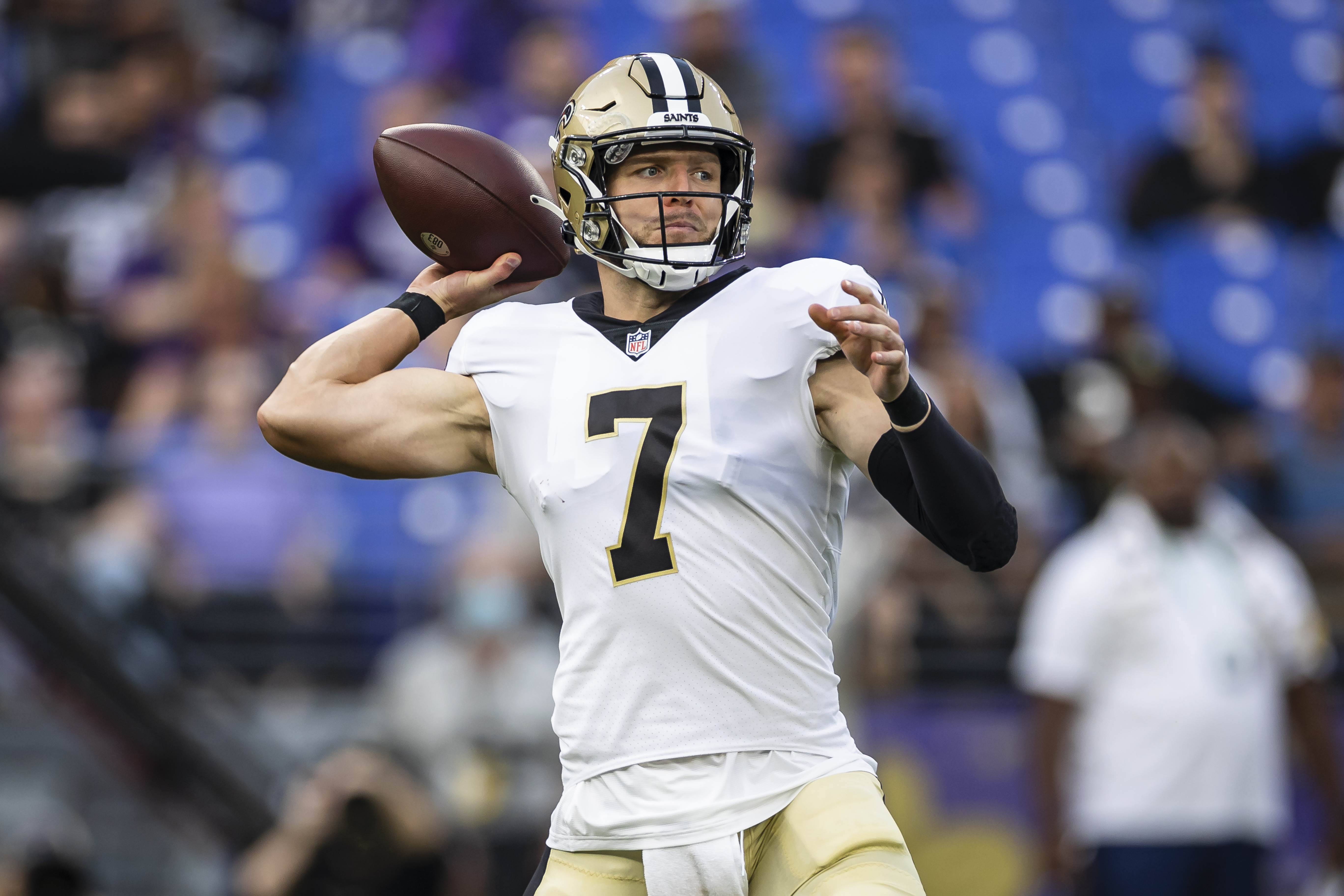 The battle between Jameis Winston and Taysom Hill will continue next week. Ian Book takes over at quarterback for the Saints in the third quarter. Book is given several plays to get comfortable, including a couple of various screens to running backs. Tony Jones Jr and Devonta Freeman are still in the game. Books best play comes on a long pass to Easop Winston Jr for 35 yards. The Saints promising drive ends after another turnover unfortunately. This time, Jones Jr puts the ball on the ground to the Ravens. After four turnovers in the first half, the Saints add another to the unpleasant stat, keeping the Ravens in the game.

The Ravens send in Tyler Huntley at quarterback. Huntley brings a running element to the Ravens offense, looking similar to Lamar Jackson on the field. Saints linebacker Kaden Ellis continues to play well. Ellis ends one of the Ravens drive with a great pass deflection. Ellis has a pass defended, six tackles and one for loss in the game so far. The Ravens only had two drives in the third quarter while Saints offense had just one.

The Saints offense barely had possession in the fourth quarter. After getting the ball on a turnover, Ian Book and the offense go three-and-out quickly, giving the ball back to Huntley. The Saints next drive is short as well, only lasting four plays. The Saints offense get one last crack at the field with under three minutes on the clock. Ian Book quickly connected with Juwan Johnson on a long play to set the Saints up at the two minute warning. Book shows his inexperience though and throws an interception with under two minutes left. This gave every Saints quarterback an interception in the game. Not an ideal start to the season for the Saints, to say the least.

The Saints defense started the fourth quarter well. Eric Burrell forces a fumble from Tyler Huntley, which is then recovered by Kaden Ellis. Ellis continues to have a great game for the Saints at linebacker. The Ravens wore down the Saints defense and take the lead with a Huntley called run for a touchdown. The Saints defense looked completely gassed in the second half. Penalties and turnovers hurt the Saints late in the game, as the Saints have 10 called penalties in the game and the six turnovers. The defense could not keep up with the pace early in the fourth but did manage to give the offense the ball back with three minutes left with a chance to win the game.