Share All sharing options for: DraftKings Sportsbook futures for the 2022 NFL Season

The 2022 NFL regular season is quickly approaching. With it, comes a whole slew of NFL future bets for teams, divisions, and individual players. Predicting an NFL season is one of the most challenging endeavors each year, especially when it comes to divisional winners, statistics, and finishes. These are some lines which stick out as being potential hits. Each bet will also use the standard $100 line. For instance, if a number has a plus, it means wagering $100 will win that amount. If a +1000 line with a $100 wager hits, the bettor can expect to win $1,000. If the line is a negative number, then it means that is the amount needed to bet to win $100. A -150 bet needs $150 on the line to win $100. Negative numbers are generally considered “favorites” to win. All betting lines are taken from the DraftKings Sportsbook.

Team and individual lines for the 2022 NFL Season

The Dallas Cowboys go into the upcoming season with a win total sitting at exactly 10 wins. The last four times that the Cowboys won the division, the very next season the team fell in the standings. For instance, the 2014 Cowboys won 12 games but followed up that season with a four-win year. The 2016 Cowboys followed up a 13-win season with a 9-win season. The team finished with 12 wins last season and now go into this year with many questions and a tougher first place schedule. The team lost Randy Gregory, Amari Cooper, La’el Collins, Connor Williams, and will start the season without their number two receiver Michael Gallup. Being the self-proclaimed “America’s Team” has its drawbacks that bettors can use to their advantage. The public tends to overestimate the Cowboys each year. With games against the Tampa Bay Buccaneers, Cincinnati Bengals, Los Angeles Rams, Green Bay Packers, Indianapolis Colts, and Tennessee Titans on the schedule out of the division, the team has an incredibly difficult lineup this year. Take the under (-110) on the team’s win totals for the upcoming year.

Do you prefer sportsbooks or fantasy for the NFL?

Since 2011, a New Orleans Saints quarterback has led the league in passing yards five times. Of course, this was with future Hall of Fame quarterback Drew Brees leading the way. However, one of other five quarterbacks who have accomplished this feat is now the starting quarterback for the Saints, Jameis Winston. If Winston can stay healthy this season, the reloaded Saints offense has incredible potential. Michael Thomas is back and looking healthy. The organization drafted speedster Chris Olave in the first round of the 2022 NFL Draft. The team has also committed to Winston being the starter, as opposed to using Taysom Hill on packages. Winston is a longshot to lead the league in passing (+3000) but there is evidence and history with the young gunslinger. 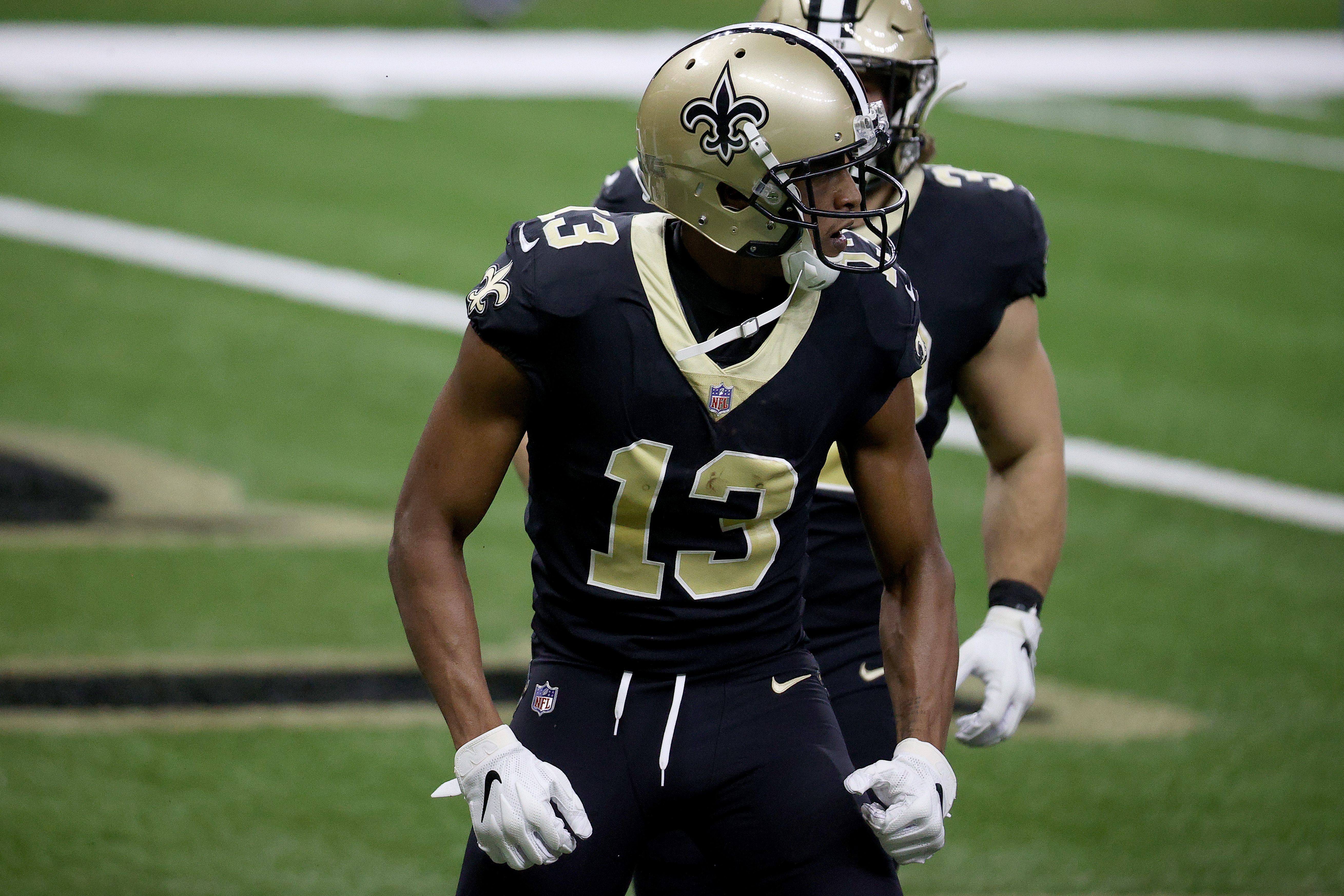 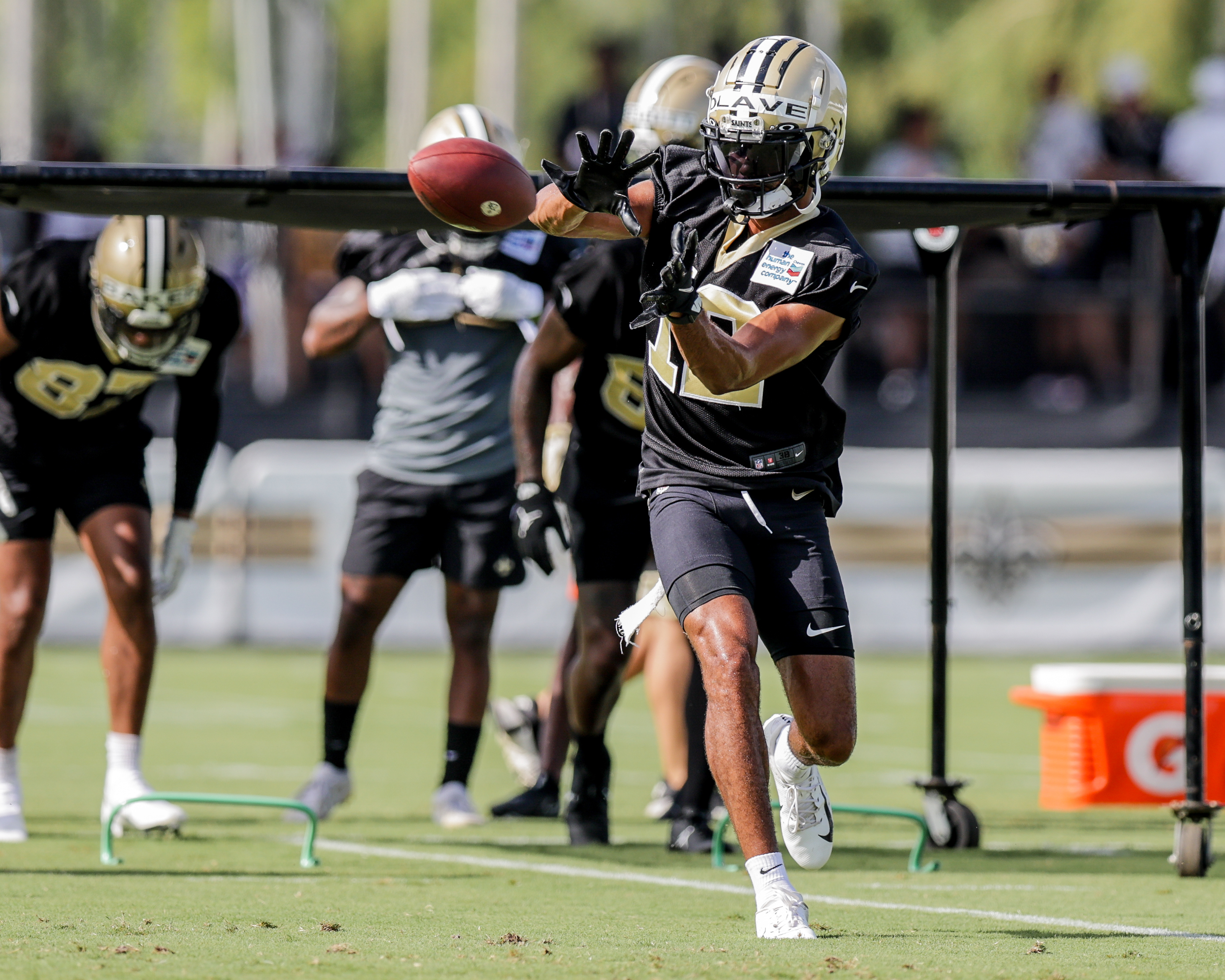 If healthy, the Saints receivers will be a dangerous duo this upcoming season.
Photo by Chris Graythen/Getty Images and Stephen Lew-USA TODAY Sports

With Tyreek Hill leaving the Kansas City Chiefs, so did his 24 touchdowns the last two seasons. Travis Kelce averaged 10 receiving touchdowns the last two years. Kelce is now the most familiar pass-catcher on the Chiefs, in a year where the team will be looking to move in a different direction without Hill. If Patrick Mahomes leans on the guys he knows he can trust, Kelce should be a target-monster this year, especially in the red zone. Previous touchdown leaders averaged between 14 and 15 on the year. Kelce needs to just add a couple more touchdowns to his total to be in contention for this mark in the 2022 season. With 12 touchdowns available after Hill’s departure, the +1200 line looks enticing going into the new year.

There have been 10 teams within the last decade that have climbed from last place in their division to winning the whole thing. With so much mobility, short-term contracts, and injuries in the NFL, any team has a chance any week. This will likely lead to many bettors attempting to grab a longshot capable of making that leap. Enter the 2022 Detroit Lions. At +1000 to win the division, the Lions are ranked third on DraftKings Sportsbook. The Green Bay Packers are the favorite (-190) with the Minnesota Vikings (+265) coming up next. Making the case for a wide-open NFC North is not difficult though. The Packers lost key players like Za’Darius Smith, Marquez Valdes-Scantling, Lucas Patrick, and of course Devante Adams. The Vikings were shaky last season, finishing with just eight wins, and go into the 2022 season with plenty of questions still looming. Another thing working in the Lions favor is many returning starters and coaches and a highly ranked draft consisting of pass rusher Aidan Hutchison and potential superstar Jameson Williams at wide receiver. The Lions were also sneaky against the spread last year, going 11-6 on the season. This is a longshot bet for a reason, but a weakened division and a feisty Detroit team could lead to some magic in the NFC North.